Moving along the Hudson, I kept drinking Gatorade as my thirst dictated, dutifully sucking gels every 30 to 45 minutes and stretching very briefly as often as possible. Anybody on a collision course with me would have had a rather stiff surprise. I was moving with the subtlety of a Sherman tank.

Running down almost the entire length of the Manhattan island always proves a sobering experience for me. On the one hand, I am going past 1.6 million people tightly packed in what is possibly the center of the known universe. On the other, Manhattan is only 2 miles or so longer than – and about the same width as – my beloved Little Cayman island, population 150 souls. 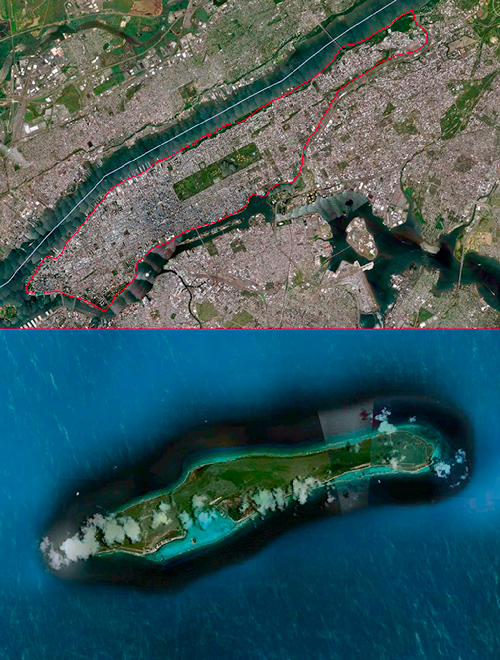 In Little Cayman, I had been walking barefoot for so long that running shoes had become a nuisance and real shoes, unbearable. I had personally known almost everyone. I had played a role equal to 1/150th of the local life, and probably much more on silly party nights or micro-events such as search and rescue operations. I belonged. I fitted in.

This thought kept me distracted well into the Upper West Side. Upon reaching the first of the great piers around 59th St, bottom of Central Park, the pain came back with a vengeance. I swore aloud and called myself names in French, comparing the length of my stamina to that of an amoeba. I also borrowed a few colorful expletives from le Capitaine Haddock and mixed them together for greater punch and relief.

I passed the Air, Sea and Space Intrepid Museum and its new Space Shuttle exhibit at around 35 km (22 mi), with 7 km to go. At that point, there was no doubt in my mind I would finish since the infamous wall was nowhere in sight, but I also knew that speed was not an option. I was going to make it, but it wouldn’t look pretty on the watch.

I was careful not to pick up the pace as I normally would towards the end of a run. Joints were complaining loudly and every walking break was cheated into by a few seconds. I ran passed Hell’s Kitchen, the Meatpacking District, the West Village was left behind and eventually, I turned into Lower Manhattan and dragged myself towards the Brooklyn Bridge. I came to a halt, gasped. I had made it.

The chrono was stopped at the City Hall with 42.03 km, 5:01 hours and mixed feelings. The men’s marathon world record is just above 2 hours. My results would not even have qualified me for a spectator seat in the Olympics.

There was no energy available to keep running for a while as one should, so I walked and panted. Drank another bottle of water, pacing back and forth on a side-walk as I had reached my 4-5 Brooklyn Bridge subway station to Brooklyn and did not want to stray away.

When I had regained control over my breathing and muscles, I ventured into the subway, anxious to be home and done. I was very happy to have finished my first marathon distance even though I had succeeded by a marathin margin, but was way too tired to feel any kind of pride.

I got on the train that was waiting on the station platform. The doors stayed open. It was hot. Very hot, as is usually the case on the MTA network in summer. The car was already packed. A ghostly voice came on the loudspeaker for one of those unintelligible announcements, seemingly stating that we were delayed but failing to enunciate loud enough why or how long for.

I had just had it. I was exhausted. The car was tropic-warm. I could barely fit in as people had been piling aboard while the doors stayed open. Things were not looking good. Covered in sweat and probably quite smelly, I stuck to a corner, crossed my arms and turned my back away from faces, desperately seeking a last hint of energy to get me home.

We finally got under way but there were three stations to go. I started feeling nauseous, then dizzy, standing still in the heat of the overcrowded car with my eyes closed, taking deep breaths and recognizing with great animosity the wall I was about to hit, having met it in at least one memorable occasion before.

I was almost there, though. I think I remember the last station before mine, doors opening and closing on an empty platform. Then we went into the tunnel below the East River. Man, I really felt like crap.

The next feeling I remember was one of waking up in a comfortable bed after a good night’s sleep. I heard voices, some shouting, but they did not worry me. I was comfortable, not to say cozy. I opened my eyes and for a moment wondered why everyone around was standing horizontal on the wall, defying gravity. Then I figured they were not defying anything but gravity had instead gotten a hold of me.

I was lying on the subway car floor among passengers who were freaking out. I bolted upright, putting my dislodged hat back on my head and distractedly noticing how wonderful I suddenly felt, as if having just taken a much needed rest. Someone was screaming “Call the conductor!” Most people were moving away from me as if I had the plague, a few were closing in hesitantly.

I realized I had just passed out. In my stinky clothes and running outfit, on a packed subway, in New York. I had actually managed to get a reaction out of a normally oblivious crowd.

Speaking up as calmly as I could, I said something like “I’m very sorry folks, I just came back from a long run and I must have hit the wall. Sorry to have worried you. I’m feeling fine now.” I might as well have told them I was a Martian. Prove it, they thought. To their credit, most insisted, offered me a seat, said I should see a doctor. A girl next to me nodded with a reassuring smile. “Yeah, don’t worry, I’ve done it too,” she said. Another told me I must have had a seizure and was out for a while, and I had banged my head quite hard. Her eyes clearly meant “I think you will be in tomorrow’s paper, I can’t wait to read it.” Sensationalism prevails.

I apologized again, thanked around and got off at Borough Hall where I sat down for a minute, mostly to tranquilize the few passengers whose stop it also was. The girl from earlier offered to get me water, I showed her my bottle and the gel I was still clutching, and said I would be fine, really. And I was. I was still amazed at how good I felt after having been out for a few seconds.

The bump on my head would show up a day later, as well as a slight bruise on the left elbow.

Strangely enough, I have only passed out twice in my entire life, and both times were on board a subway. The first was many years ago in Singapore, and was due to a dash to catch a train and the subsequent surprise to realize – albeit late – that Asian doors are often lower than we expect them to be. But that is another story.

This story’s moral would sound something like this: When they said “Do not stop running abruptly and rather keep walking for a while”, they were not kidding. It’s called vasovagal syncope, a sudden drop in blood pressure after overexertion, decreased blood flow to the head and pfffff, down you go.

I took an ice bath for my legs once home and then a short pleasant nap, and felt barely any soreness the next day. But really, it was my snooze on the subway that refreshed me the most.