219 years ago, heads were about to roll in France. They had before 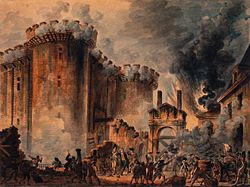 and would roll again. Often. Such is the hideous face of our history.

On the 14th of July, 1789, the prison and armory of Paris, la Bastille, under assault by a mob composed of citizens of Paris and eventually joined by some mutinous National Guards, finally fell. Monarchy was about to collapse. It was the beginning of the French Revolution.

A little over a month later, a document would be ratified that was called Déclaration des droits de l’Homme et du citoyen (Declaration of the Rights of Man and Citizen). Strangely enough, or maybe not, the US Declaration of Independence was signed in 1776. These were troubled, freedom-seeking times. Bloody times. 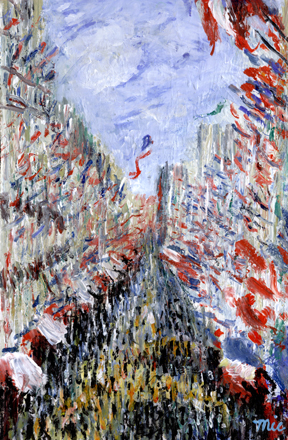 those rights, against them or not caring at all is just a matter of perspective. As the First Republic was being born, France went through a Reign of Terror (la Terreur) and guillotines snapped happily at a multitude of heads. Parisians were busy killing each other for quite a while; with or sans-culottes, nobody was safe, nor spared.

Eventually, the Republic would again fail as Napoleon Bonaparte proclaimed himself Emperor, no less. Then monarchy did a come back, saluted and plummeted again. Then a Second Empire was built. Yawn. It gets so boring…

But tonight we celebrate the 14th of July and there will be fireworks everywhere. That’s nice. Before the fireworks, however, a huge military parade will catalyze and paralyze Paris. That’s stupid. Let’s, as I have said it in the [[National anthem of the lobotomized]], put war to rest and stop bragging about the size of our… canons.

A bloody hymn will be played across the land, over and over again,

as people stand up and veteran eyes shine and politician minds compute and mouths gap, as wide open as the brains that run them, fragile, empty.

From the heart of Paris to the suburbs of Marseilles, from the grey skies of Normandy to the sunny beaches of Côte d’Azur, from little alpine villages to rural Ardèche, everyone French, on this famous day, feels something. Feels different. If only we could get everybody to feel the same. And if only that meant looking forward rather than back. Then we would truly have a national holiday worth celebrating.

The bloodshed and barbarism that have lead us where we stand is nothing to be proud of. It might have been unavoidable but that was then, this is now. Can we, s’il vous plaît, once and for all, put it all behind us and allow ourselves to grow out of the blood bath, rather than look at the stains with the loving eye of a mother blinded by her instincts?