Having been spoiled by gems such as Vancouver’s Seawall,  I tend to complain and moan about my New York runs. Nothing fresh, nothing green, nothing clean. In addition to normal chimeras and recent lower leg issues, my routine deals with thick crowds, high noise, abusive smells and clueless drivers.

So once in a while, in order to break such routine and infuse the workout with something new, I bring a camera along and force myself to look at the city I am crossing with unknowing eyes. It does take effort but choosing a different route helps and what I lose in automation, I gain in distraction. Here is the recount of such an experiment, a standard 11 km run completed a little more slowly than usual because of the many – albeit brief – photo stops.

I run camera in hand, and wrap up most shoots in under 30 seconds. The camera, a good old Canon S95 in RAW and P mode, comes alive as I stop. I quickly dial in some EV if needed, press the shutter twice with slightly different settings and resume my run as the lens retracts. People must think I’m nuts. Don’t expect fine-art, this is mobile photo-reportage. 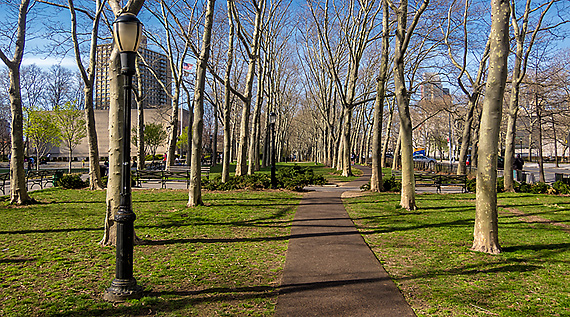 From home in Cobble Hill, a brisk 10 minute walk warms me up to Cadman Plaza, at the bottom of the Brooklyn Bridge. I start running there but head east for a block instead of climbing up onto this bridge. I hop onto the next one instead, Manhattan Bridge, much less scenic but kind of cool in its aggressive unfriendliness.

Most cars are out of sight on the upper level but the lower level combines subway tracks, more car lanes, a narrow pedestrian path on the south side, tightly fenced and overlooking its half of the world, and a bike lane on the north side.

While the Brooklyn Bridge approaches are steeper but culminate at each tower, followed by a slight recess across the river, on the Manhattan Bridge one runs up until the half-way point and then down all the way to shore. Since I am running on the south side, I get a great view of the neighboring Brooklyn bridge, of DUMBO behind me and Manhattan up ahead. The carousel is busy down below. Boats are inching along, a police patrol boat moored in the usual spot.

Subway trains are roaring past me every minute or so, in a deafening assault of the senses that makes me smile. This has more to do with Blade Runner than with my daily reality. And then I smile even wider when I notice the pun. 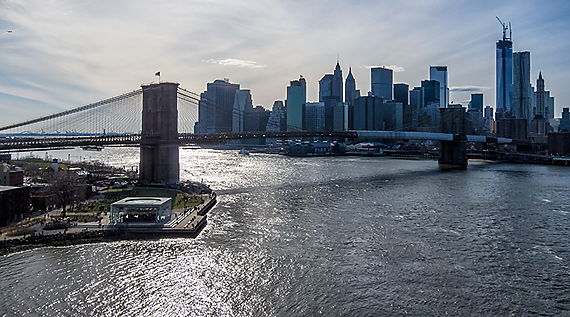 A field of rooftop graffiti in full bloom awaits me on the Manhattan side of things, and Chinatown greets me with a dragon’s smile. She is bright, colorful, busy and always a tad strange, not quite familiar enough for me to feel at ease.

I run past live frogs, dried geckos, powdered seahorses, exotic fruit and much pushing around, following my curiosity in the general direction of City Hall. Then Asia recedes as fast as it had materialized and I am back in the West, which is our East.

The high security neighborhood I now step in is guarded, fenced, monitored and patrolled with obsessed zeal. I feel watched, and must be. Uncle Sam has got to be staring at me and evaluating what I am running for.

I happily leave the beautiful old buildings behind me, cross City Hall Park and head down Warren Street, against the traffic, using the bike lane as my damper zone. Evil Empire State Building peeks down at me from the converging perspective of northbound avenues.

The bottom of Warren, where Whole Foods occupies a block’s length, is ruled by dogs. A dirt-less canine park features a water pool but the poor animals have to run on asphalt. This is a city after all. 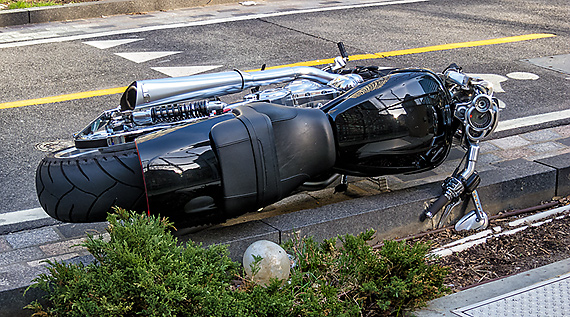 As I turn left and south, I pass by a police cruiser stopped across an intersection along with a car whose front is badly damaged. A motorcyclist helmet, smashed, has been dropped on the street. I fear the worst. Some 50 feet from there, on the bike lane, the motorcycle itself is resting flat, its handlebar broken off.

Meat Loaf lures in the back of my mind, and then I’m down at the bottom of a pit in the blazing sun, torn and twisted at the foot of a burning bike, and I think somebody somewhere must be tolling a bell… But looking back I see a guy in a leather jacket picking up his helmet. He made it alive. Must be in complete shock. Whose fault was it? Does it matter? 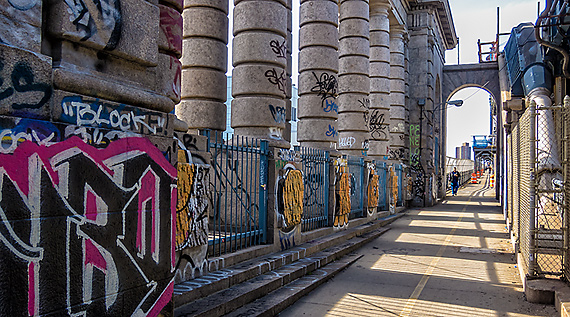 Climbing unto the Manhattan Bridge 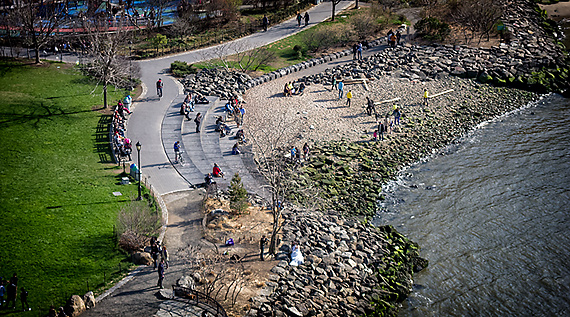 Wedding pictures on an urban beach 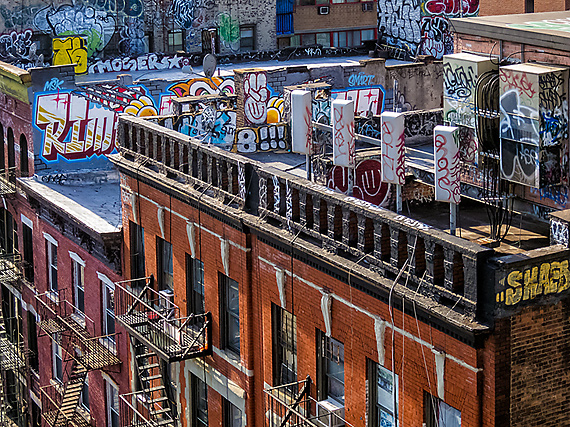 The edge of Chinatown 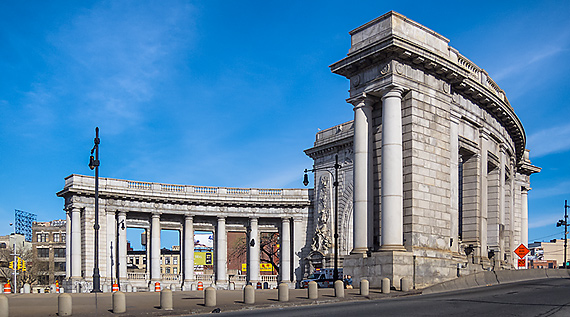 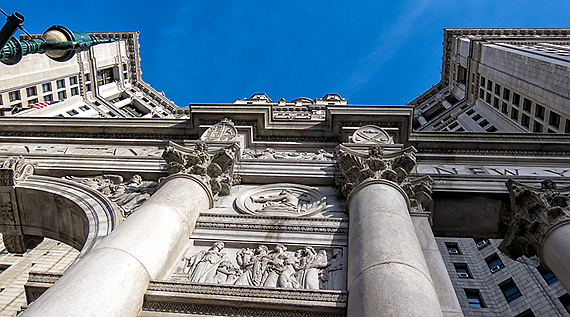 The old and the new

A slice of New York life 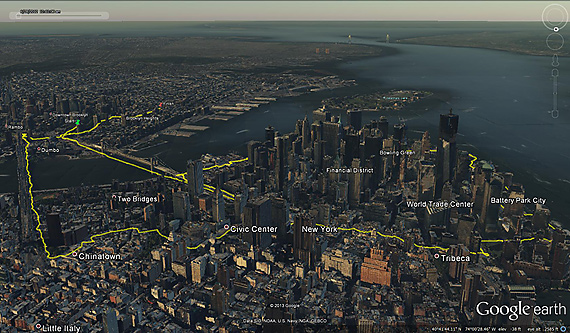