Imagine the most breathtaking coastal scenery in the world, with Table Mountain at one end and Cape Point at the other. Throw in some cute little fishing towns, majestic cliffs, giant breakers, seaside mist, sandy beaches, wild surf, unrelenting sun and some annoyingly nasty climbs. Draw a 110 km route around all this, starting in downtown Cape Town and almost closing the loop at the new Greenpoint Stadium. Invite 35,000 of your cyclist friends, assign them a number and a starting time, drop a line to Lance Armstrong while you’re at it to see if he’ll join, hope for good weather but expect the worst both in heat and wind, add a myriad of spectators and supporters, back yourself up with an impeccable organizing team and you’ve got the Cape Argus Pick n Pay Cycle Tour.

My father-in-law Henri has done it four or five times. 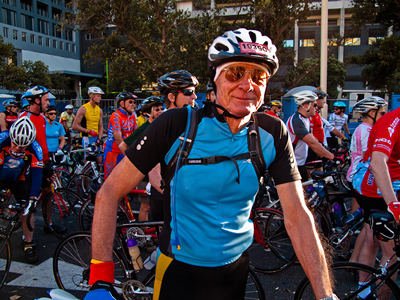 He’s 77. When Marie and I managed to delay our departure from South Africa to the 19th of March (the Tour happening this year on the 14th), I suddenly had the silly idea of riding along, for the experience if nothing else. Henri agreed. He said the spectacle was incredible. He would lend me his training mountain bike, we had an extra helmet, and biking shorts are cheap. It sounded nuts.

Now, remember that I am no cyclist. Me, I run. All it takes is a pair of running shoes and traffic is never an issue. A bike, on the other hand, feels like a clumsy tool I am forced to adjust to and which causes all kinds of pains and aches. But I do like a challenge and always enjoy a chance to ridicule myself.

So I said yes. Marie and I were about to embark on our road trip and I had just injured a leg; it was doubtful that I would get much training done while away. I would thus be left with 2 weeks before the Tour to launch into serious biking and adapt to my machine.

Back from the road, I did 3 rides in a week, ranging each from 60 to 70 km and covering most of the actual route so that I would be somewhat familiar with the difficulties to come. Then I rested. Two days before the event, I finally had the bike fitted with slicks instead of the good old off-road tires.

My limited training hadn’t allowed much timing extrapolation but I was looking at a minimum of 5 1/2 to 6 hours to finish, possibly more depending on the wind and heat. For humbling reference, in normal weather over 20,000 people finish the Tour in sub-5 and some 13,000 in sub-4. My strategy was simple. Once under way, just keep going. Minimum number of stops, no rushing, no sprints, and above all, STAY AWARE OF OTHER RIDERS. Lots of people out there, Murphy’s Law would be begging to prove itself.

The Cycle Tour, most often referred to as “the Argus”, is an incredible feat of pure organizational genius. 35,000 cyclists are released in groups of 600 at two-minute intervals from two lanes into which alternating stalls are fed. The real racers like Lance go first, obviously, and for them it is a true race. They will finish it in about 2 1/2 hours. Regular repeat participants are then seeded according to their previous race time. The rest follow. Each rider is equipped with a mandatory chip that allows precise individual timing. People are also given the option to wear their number prominently on helmet and bike, so that race photographers can identify them and put the pictures for sale. All 35,000 of them.

According to the tradition, Henri and I carbo-loaded for a few days and had pasta on the last two nights. On the night before the event, everyone was nervously watching a forecast that predicted gusts of up to 65km/h. In 2009, hurricane-strength winds had turned the Cycle Tour into an incredible ordeal, with occupied portable toilets being blown off at the start line and racers reporting having to stand up and pedal hard into the wind on downhills so steep they normally would have been free-wheeled at speeds above 60 km/h. That race was deemed the hardest Argus ever.

So on Sunday March 14th, when we got up at 5:30 AM (and much earlier for some), it turns out that about 6,000 cyclists of the registered 35,000 looked out their window, saw some wind already blowing, and elected to stay in bed. As for us, we drove the Kombi to Henri’s work parking downtown and rode our bikes from there to the start. An incredible coincidence had placed us in the same start group pen, FF, which would be let out at 8:02 AM. We were on site at 7:30, worked our way to the pen and waited for departure. We were both carrying two 1 L bottles of Powerade and a special high energy/recovery mix, and had 5 energy gels each, to be sucked on every hour. I had attached my G10 to the handlebars but didn’t really expect to be able to take pictures during the ride.

The departure of the Argus is probably the most impressive stage. Up

to 35,000 people are channeled to twin start lanes in the most extraordinary display of Swiss-like efficiency. The start area is shaped like an inverted T, or rather 2 L’s standing next to each other with the left one mirroring the right. Got it? There are pens on each side of the vertical branches and some more along double rows at the bottom. Riders are released from the top, in packs of 600, every 2 minutes, using the 2 lanes alternatively so that when a group goes, 600 more people immediately move forward to the line, filling the gap, while the opposite side is being readied to go.

I watched all this with my jaw hanging, carried forward by the human flow, hardly able to believe I was actually there, and quite worried about the fact that I indeed was. There were a lot of strong-looking riders around me and many, 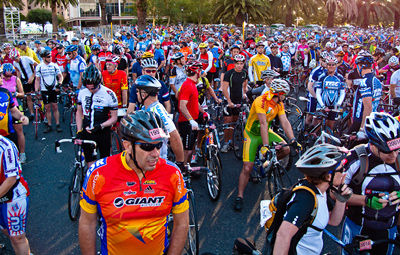 many road and competition bikes. My mountain bike was going to have a hard time keeping up, and my legs an even harder time. Henri was smiling, still impressed by the show, seemingly confident at this stage since there was no turning back.

The wind had delayed departures a touch but organizers were catching up and keeping us informed over the loudspeaker that also announced every start. When our group was told to prepare, with some 45 seconds to go, I glanced at my Forerunner incredulously: it was 8:02 sharp. In a last-second impulse, I wished Henri a good ride and chickened out of the peloton’s core, sliding with my bike to the side fence. I was worried about mass collapses in the infamous wind tunnel just past the start line and decided to let the 600 people go first. My time would only begin once I passed the timing mat anyway.

But the start was uneventful. I later learned that my pen had only held 480 riders. It took less a 30 seconds for the whole group to get moving and there weren’t any falls. Race organizers with megaphones were cautioning cyclists to take it easy, to be careful, it was very windy. Everyone gave their legs a warm up and tried to settle into a rhythm. I had long lost sight of Henri.

The Argus route leaves Cape Town towards the east veering around Devil’s Peak. It then heads south all the way to Cape Point along False Bay and then traverses to the ocean side and comes back up to town. It features 4 major climbs and a series of smaller ups and downs.

The wind was blowing from the south-southeast. It nailed us as soon as we had turned the corner around Table Mountain and were facing the first serious climb up Edinburgh Drive. Most spirits must have taken a beating right there. I know mine did.

A couple of guys on a tandem, arguing loudly with each other, hit me from behind. The first contact was the frontman’s helmet on my elbow. I looked backed, startled. They somehow recovered but as they were passing very close, lost balance again and fell right on me. I was so pumped up that I braced myself strongly and leaned into them, and that must have saved us all because nobody collapsed. They regained their upright position again and pressed on, still yelling at each other, without any apology or acknowledgment of any kind. From then on, I knew it would be chacun pour soi.

I’m still not sure how strong the wind actually was. 50 to 60 km/h gusts would be my guess for the later part of the route. Early morning must have been better. But the Blue Route, a long stretch on a highway cruising along Constantia, wasn’t as much fun as I had expected. Marie and her mom had come to see us off and were standing on a highway overpass, some 15 km into the Tour. They never saw me coming despite my waving in advance, but at the last minute, Marie managed to shout “Vive la France!”

La France definitely needed some encouragement. The problem with a mountain bike is that the gears are fit for steep uphills but on flat roads, I ran out of gears much before everyone else. All I could do was free-wheel when possible, but my top speed never matched that of most bikes – except maybe in extremely steep descending sections where safety became the main moderator.

At the end of the flat Blue Route, the Tour climbs above Muizenberg onto Boyes Drive. It then winds along the coast in and out of small towns in what should have been an easy ride with only short hills. With the headwind, however, it felt – as Henri put it later – like a single, 20 km-long climb. When the road came close to shore, sand blasted at us furiously and by the time we had gone through Kalk Bay, Fish Hoek and Simon’s Town, my left quadriceps was giving up and threatening to go on strike, a cramp looming. That had never happened on the training rides. I had 69 km to go.