Cartwheels over Lesotho, Part 1 – War and Peace in the Karoo

The Karoo has not always been hot. Long, long ago, it lay covered in ice for a hundred million years. Then, two hundred and fifty million years before this blog 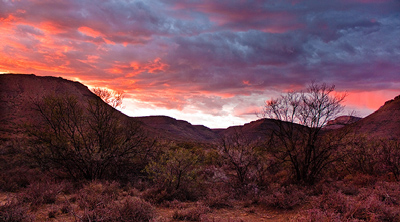 post was written, the area turned into a basin and as the millennia passed, featured various water bodies, some as vast as inland seas. Enormous coal deposits were formed. There was ferocious volcanic activity and lush forests emerged for life to thrive in. The Karoo was a happening place.

Today, what remains is a 400,000 km2 semi-desert no man’s land, a gigantic and desolate damper zone between the narrow temperate belt located at the very southern tip of South Africa and the rest of the continent. The Karoo is rich in fossils and has made it into the geological Hall of Fame, having given its name to the Karoo Ice Age after providing the first clear evidence of such glaciation.

While modern days began when the Cape was colonized around the mid-sixteen hundreds, it wasn’t until the nineteenth century that roads were actually carved into the Karoo. The local tribes of Khoi and Bushmen began a slow but irremediable descent into oblivion and game was slowly replaced by sheep. Some nasty fighting took place between two white antagonist tribes selfishly pretending to control the land early in the twentieth century, and then, while a fierce sun shone unflinchingly in deep blue skies and slowly fried people, stock and grass, the Karoo seemed to recede away from colonialist attention.

There, not really out of reach nor out of sight but isolated nonetheless, it lay dormant again, covered this time not by ice but by heat, barely 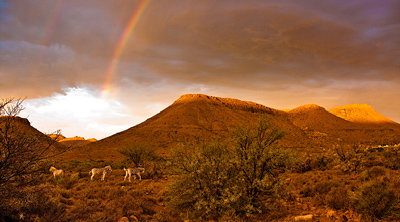 The Karoo has now reappeared on all maps and is being conquered once more, albeit superficially, by a new breed of pioneers in high heels and air-conditioned motor vehicles. They are called tourists. For better and for worse, from time to time, I happen to be one of them.

There are in fact two Karoos, Little and Great. Marie and I visited the former two years ago on a short trip that took us to Ronnie’s Sex Shop, Prince Albert and Die Hel. The Great Karoo, however, had eluded us. So Marie booked us in for two camping nights at the Karoo National Park to begin our Lesotho trip. From Cape Town, we were facing an easy 475 km drive on N1, a rather good road by South African standards despite its bad reputation.

This time around, packing up for the road was a breeze. When we left Constantia in the morning of February 14th, the brave Landcruiser, which we affectionately call Mogashagasha (spelling unsure – it’s Selina’s Sesotho nickname for the car and means “She who goes over everything”), looked the same as it had the year before. Full, heavy, eager.

The N1 bypasses the Little Karoo to the north and desolation soon settles in; the road stretches far, far ahead as kilometers tick and diesel burns. We stopped for lunch in the very picturesque hamlet of Matjiesfontein, had a sandwich and a beer and pushed on. Around four o’clock, seven hours after leaving Cape Town, we were at our turn-off to the park located just before the town of Beaufort West. We passed a gate manned by an exceptionally jovial ranger and drove some seven or eight kilometers to the reception area. It had been an easy day. Trouble could now begin.

We registered and headed down to the campsite, an unfenced loop hidden into thick vegetation. Huge tortoises were roaming freely within the area. We thought that was really cute and half-seriously agreed we’d have to watch out for 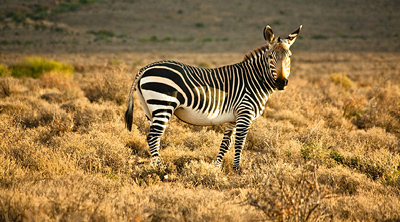 them, especially after noticing a medium-size specimen with a seriously damaged shell. Arriving late, we didn’t have much of a choice of sites and stopped at one that seemed to yield minimal shade and power to plug our fridge in. The power outlet, however, turned out to be for caravans only and we decided to move. Marie got into the Landcruiser after looking under the Toyota for tortoises, and started forward.

There was a loud crushing sound and a neighbor camper started yelling warnings, telling her to back up. My blood chilled. I knew exactly what had happened. The stupid tortoise with the broken shell, probably seeking shade, had managed to sneak under our wheels in the five minutes we’d been parked there. Somehow, when Marie looked under the truck, she hadn’t seen it.

The next hour was very sad. The poor animal was badly injured and bleeding profusely. Marie was crushed too. She alerted the park rangers who came and took the tortoise away. The campsite superintendent, when told about our fate, didn’t seem too concerned. “It happens a lot,” he said. We couldn’t believe such casual lack of interest.

This was a National Park. Animals here were protected and valued. Signs were posted about not feeding them, about this and about that. Yet there was absolutely no warning about the danger of driving over a tortoise in the campground, despite the fact that it had happened before. In the two days we spent in the park, we had multiple instances of tortoises crawling under the Landcruiser. The same must have happened to others. Why didn’t the Park Administration bother to post notices and warnings, or advise people at registration time?

It was a sad Valentine’s Day. The afternoon had taken a dark turn and Marie tried unsuccessfully to put the tragedy behind her as we prepared for dinner. Later, having eaten and cleaned the camp up a bit, we took showers and readied for bed.

When I came out of my shower in the ablutions block, my toiletry kit, containing my electric shaver and a headlamp among other small articles, had disappeared from the counter I’d left it on. The t-shirt I’d tossed with them was hung neatly on a nearby hook. Puzzled, I assumed Marie had needed something of mine, 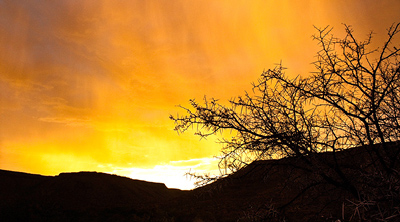 sneaked inside the men’s showers and gone back to the tent.

She hadn’t. After returning to the ablutions block, I ran into a short older man walking out of his shower with my pouch in his hand. He had the guts to pretend it was his, in a strong German accent. When I grabbed the kit away from him and opened it, revealing my possessions, he mumbled he had merely “taken it and put it in the shower.” He didn’t try to make any sense. He was justifying himself worse than a school boy caught with a hand in the cookie jar.

Back at the tent, I realized my headlamp was still missing. Getting madder and madder, I stormed over to the thief’s caravan but he said he knew nothing of it. I checked the ablutions block again unsuccessfully, and then saw the bloody fool walking casually over to our tent, my headlamp turned on and swinging at arm’s length. He handed it over with an incomprehensible speech. I was stunned. I had never met a kleptomaniac before.

The man obviously was pathologically addicted to theft. He was only unwillingly letting go of his prize because of the threat I posed. A campground is a small place. It must have been terribly difficult for him to renounce the lamp.

As I have written in a comment on Marie’s related post, I pictured the thief’s caravan as this incredible museum of strange artifacts stolen here and there, power cords, tooth brushes, dirty underwear, glasses, plates, running shoes, old dentures, a handkerchief with initials, half-burnt braai coals, a license plate from Congo, a broken pair of binoculars, books, hats, matchboxes, and the most daring piece, a bicycle with a missing wheel, stolen while the biker was walking to town to get his tube patched. All labeled with dates and location and dusted every day…

The following day, after a beautiful morning drive deep into the park, we decided to evade the growing heat by heading to Beaufort West for supplies. As I was slowly driving around the small town, local cops pulled us over. A strange eccentricity of my father-in-law who despite brilliantly practicing law has decided to challenge it when it comes to the license plates of his vehicles, the Landcruiser’s plate font was illegal and had just finally attracted too much attention.

Being stopped by cops who are paid a misery in the middle of nowhere is always a little disheartening. One immediately smells trouble and the specter of bribes comes gliding in with an evil grin. But our traffic cop, a friendly female, was in a good mood. After hearing our worried and apologetic explanations, she simply declared that she was going to make us remove the plates on the spot and replace them, otherwise he (the father-in-law) never would. Marie burst out laughing. It was so true.

I tore the plates off the truck 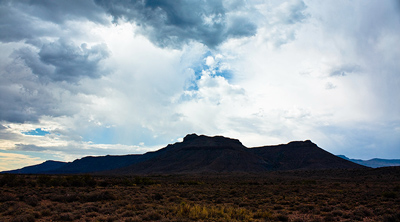 under the curious watch of various onlookers and then took the wheel again and we followed the two very obliging cops to a local shop that made five-minute plates. We never got a fine. The plates cost $20 and we were off the hook. We waved our good cop good bye and she waved back. She didn’t have to know the offending plates would be back up in no time. Henri, at 77, has earned the right to stubbornness.

The afternoon heat was rather intense; we ended up in the park’s deserted swimming pool to cool off, then drove around for more game watching. Later, the sunset was incredibly beautiful and I spent a long time in the bush behind our camp stalking zebras and shooting a mesmerizing rainbow in glowing orange light. The following day we’d be off to a farm near Nieu Bethesda, on the eastern edge of the Karoo.

Trouble had come close but not defeated us. It was, however, a complicated start to a long trip. There remained, far ahead of us, much uncertainty in terms of dirt roads, mountain passes, distance and weather. We both silently wished for things to improve and hoped for the upcoming border crossing to be less eventful than last year’s entry into Namibia had been.

One spends an eternity awaiting adventure and suspense, sharpening blades and packing for the unexpected. When they occur, though, out of the blue and in fast-forward, one suddenly remembers the sweetness of peaceful, uneventful days. The longing for home and its quiet safety returns like an old forgotten friend.

When we are here, we always wish we were there. And vice-versa.