March of the Blizzards: First we Take London, Then we Take Manhattan

On the morning of Sunday December 26th, when I left Montreal on the Amtrak Adirondack train – a day early because a blizzard was forecast to strike New York at a critical time that evening – the weather was fair and despite

some snow on the ground, Canadian winter was playing nice.

That fairness lasted for nine out of the eleven hours of my trip. Finally, around 6:00 or 6:30 PM, well after darkness had fallen and I had given up watching for signs of the impending disaster, heavy snow began to fall and the wind picked up. Our train was charging through the night and all around me in the car, cell phones buzzed and reports started coming in from the Big Apple that it had been snowing hard since before noon.

But we made good time and even a frozen track switching that forced the crew to jump off the train with shovels didn’t really delay us too much. We were entering Penn Station at 8:45 PM. The city was blanketed in white. We had been riding on the wings of the storm.

I didn’t dare venture outside and dove straight into the subway, loaded like a mule with my paraglider on my back and a small suitcase in tow. People were walking by covered in snow

and ice from head to toes, looking somewhat stunned, as if they couldn’t believe this was actually happening to their city.

I got off at Bergen in Brooklyn and dressed up for the worst before exiting the subway station. Up in the street, the wind hit me hard and snow flakes stung my eyes. My memories flashed; suddenly, I was back in the old days of Chicoutimi snow storms. But here neither the sidewalks nor the streets had been cleared at that point 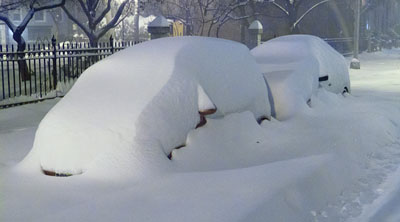 and I worked my way home at a snail’s pace. A walk that normally takes me seven to eight minutes lasted thirty. I was at times sinking almost knee deep in fresh snow banks and had to drag the suitcase over them, the wheels rendered useless.

Once home, I dropped my bags, fed an ecstatic cat and hung out with him for a while, and then headed back out with the camera. Brooklyn had turned into a strange sleeping beast; most streets were completely deserted and parked cars slowly disappeared under mountains of snow. But the main arteries like Atlantic Avenue were in muffled chaos.

New York drivers obviously aren’t used to driving in the snow and very few cars have proper all-season tires, let alone winter ones. People were driving slowly and still sliding into snow banks and getting stuck

everywhere. Some drivers were attempting to turn onto streets that weren’t clear and remained stranded, blocking the way. Morons decided to drive on sidewalks instead of streets. Others were systematically driving through red lights as if snow had yielded anarchy. Pedestrians walked right in the middle of the road. Wheels were spinning frantically as heavy feet squashed gas pedals in mounting frustration. Ambulances were struggling to reach slightly uphill emergency hospital doors. Stuck cars were left abandoned everywhere, in the middle of lanes or across the street. I just couldn’t believe my eyes.

Eventually, I went back home and got some sleep. In the morning, accumulated snow on the terrace rose well 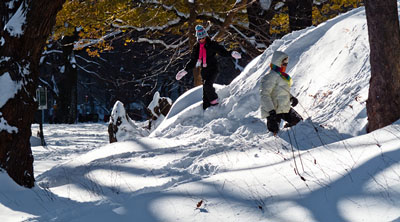 above my waist. At noon, I went to Central Park and strolled in the biggest improvised playground in town. The sun finally shone in a perfect blue sky and people were looking around them with amazed eyes. Kids were sliding down little bumps on makeshift sleds and having snowball fights. Many adults eagerly joined them.

To its credit, the city was recovering rather fast. Granted, subway service was still heavily delayed by the end of the afternoon and JFK only re-opened around 6:00 PM. Still. The blizzard won’t have paralyzed New York for much more than twelve hours. My traveling plans remain intact. It seems like plan B won’t be necessary after all. B as in Blizzard. 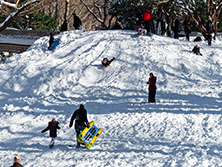