Bridge Over The River Hudson

They say time travel is still science-fiction. I beg to disagree. We have already invented it and use it on a daily basis. Sort of.

A few centuries past, leaving Cape Town bound for New York, one would have had to follow the clipper route to the east, going the long way, and the trip would have taken uncomfortable months, disease lurking, mutiny at hand and storms ruling randomly over the outcome of the journey.

More recently, a hundred years ago or so, a traveler would have boarded a liner, put out to sea westward, enjoyed more comfort and reached North America within a week or two, having written letters while the ocean glided by endlessly, intent on mailing them from the New World and, fingers crossed, have them backtrack swiftly enough to find the correspondent alive. 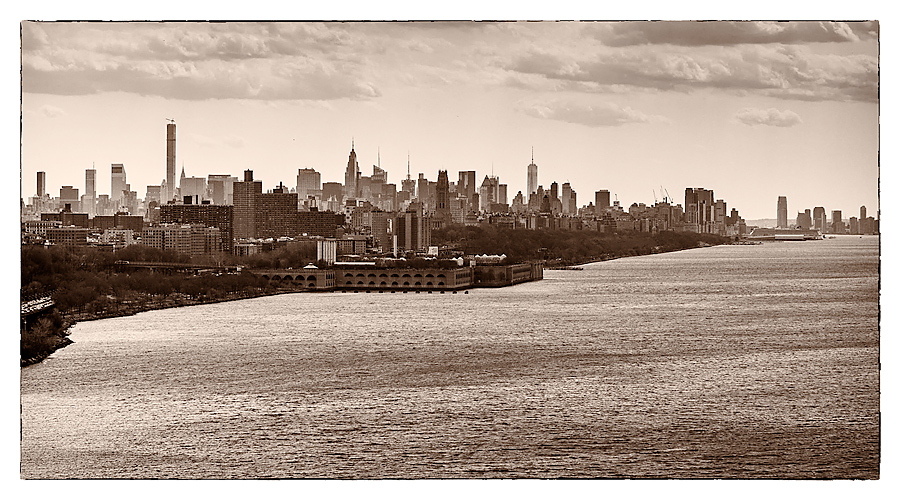 Nowadays, though, Marie and I can hop aboard a fast plane, travel just below the speed of sound at an altitude much beyond that of Everest and be home in a matter of hours, with for only complaint topics the quality of in-flight entertainment and the forthcoming of sandwiches.

Is that not time travel, or folding space?  We do not yet arrive before leaving, but with such haste we waste less and less of our lives in transit. Looking at a snapshot of the world’s airspace at any given time showing all airborne flights is mind boggling. Make no mistake about it, it is also like watching us kill the planet, live. Maybe that is the only way to evolution and the stars beyond. But that is a separate discussion. I digress.

Another area where this “time travel” is locally obvious is a city’s set of bridges. Like gigantic venturi following Bernouilli’s principle, bridges channel, funnel, speed up and spit out an extraordinary volume of traffic- and I am voluntarily choosing here to ignore traffic as a jam and view it instead as a flow.

A few weekends ago, weakened by an ankle injury and missing my bridge runs, I decided to walk across the George Washington Bridge. Labelled as the world’s busiest motor vehicle bridge, the GWB is a monster. Double-decked, it features a total of fourteen lanes. Surprisingly, bicycles and pedestrians also have been given a narrow path (a couple, actually, but one side is closed) across the Hudson.

Twice as long as anything existing at the time, the GWB was opened in 1931, eventually losing the battle for length to the Golden Gate Bridge. Modern bridges have long eclipsed these, but the GWB remains the busiest, digesting one hundred and six million vehicles a year.

I like to think of this as time travel too. A very narrow corridor of highly concentrated flow, changing the lives of people who use it (and I again choose to ignore the traffic issue), bending space around the river and speeding up an otherwise almost impossible crossing.

The mind bends, too, while one crosses the lines between shore and river, state and another, ground and air. The perspective is provocative, cables reaching for the sky, seemingly so frail, almost delicate. Cars rush by, their occupants’ attention focused on the immediate threat of other vehicles, but pedestrians can afford a more contemplative approach, and apart from dodging cyclists – who just like on the Brooklyn Bridge, firmly believe they own the world – one can actually take a moment to stop and stare in awe.

A bit like while flying, the world below becomes microscopic and strange, begging the observer to grab of pair of tweeters and start rearranging the miniatures, planting trees, moving cars and re-positioning little people frozen by the distance.

That day spring was fashionably late. A cold Jersey wind was blowing great guns, and half-way across the span my ears hurt so much that I turned around and bailed. Still. An impressive architectural feat.