No, this isn’t a Southern French beach picture. I took it yesterday on a stretch of remarkably turquoise water just outside Kalk Bay, South Africa. 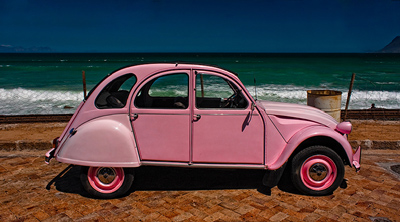 The adorable little car – and I’m not a fan of the colour pink, but this was preciously silly – is an old Citroën 2 CV.

The 2 CV wasn’t only driven by Inspector – pardon me, Chief Inspector Clouseau. It’s actually one of France’s most iconic cars ever built. Its production began just after WW2 and the car was literally meant to encourage a popular switch from horse driven carriages to the automobile.

The 2 CV (as in deux cheveaux vapeur, or two steam horses) was a brilliantly designed and very innovative mechanical jewel, but in a minimalistic and economical way. It was light, very easy to repair, had an independent soft suspension and high clearance that allowed some off-road driving, and it didn’t cost an arm and a leg.

Of course, with these attributes, it was also a little fragile. I distinctly remember putting a nice dent into a side panel with a poorly aimed shoot of my childhood football. It also had nasty flap-up windows which, when open, threatened one’s fingers in tight curves. But even with production ending in the late eighties, many 2 CV’s have managed to survive and are being lovingly maintained and cared for. With such a simple design, one would think they could last forever.

Kalk Bay is a quaint little seaside town built around a small fishing harbour, visited by whales in the winter and home to the fantastic Harbour House restaurant and also the much more simple Olympia Cafe, where I was thrilled to finally find my favourite spinach polenta back on the menu.

I’ve been hoping for the weather to turn winter-like and for a freakish storm to hit the coast because waves hitting the pier and lighthouse in Kalk Bay are an incredible spectacle. I’m afraid my wishes won’t be granted. We’ll have to come back.

Either way, a 2 CV is always a happy sight.