A Killer Time with Killer Whales 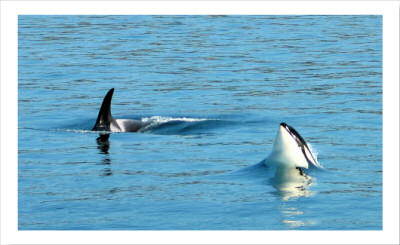 t had been over a year since I’d set foot on a real boat. Ferries don’t count, they are ships and they don’t wobble much. The Sewell’s Marina eco-tour hard hull inflatable doesn’t count either; it feels and looks more like a fast rubber-ducky than a serious boat.

But I spent today aboard Prince of Whales’ Ocean Magic I, tracking whales. Now that’s a boat. Small enough to let you feel the seas while cruising at 30 knots, big enough to have an upper deck. And a head.

The fam’ trip, courtesy of Director of Marketing Melissa, was absolutely fantastic. Our 62 ft. aluminum boat left the Vancouver Seabus terminal around 8:15 am, took us under the Lions Gate Bridge, and headed south along the eastern shore of the Georgia Strait.

After passing by Point Roberts, strange U.S. enclave isolated at the tip of a Canadian landmass, the captain decided to head west and into the Gulf and San Juan Islands. We crossed the Strait, eyes strained on the horizon, on the lookout for blows and dorsal fins.

He spotted them just south of Saturna Island. Our onboard marine biologist came out of the wheelhouse with a big grin. “You guys are lucky, she said, we’re the first boat on the scene. There’s at least one pod dead ahead of us.” It turns out all three of the resident pods were there; the J, K and L pods total around 80 individuals.

These are fish-eating killer whales, as opposed to the transient ones which prey on marine mammals. They are highly sociable animals, and as soon as we were close enough, a hydrophone was lowered into the water. The whales were extremely vocal, and as if to confirm the joyous tone of their conversation, they started jumping out of the water, landing in giant white splashes.

For the first time since I bought it for the Utah trip years ago, my dear old Canon G3 felt totally insufficient for the task at hand. The battery I had 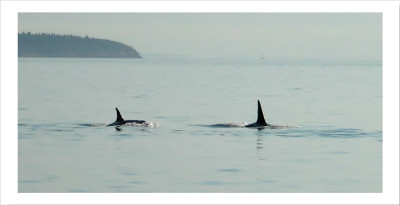 seemed weak and even in manual focus mode, the metering system lagged too much to allow me to capture the amazing jumps. I swore silently, fought with the camera, and still had a blast.

The show was surreal. I had seen such large pods of dolphins many times, but killer whales are… big. The photos just don’t do them justice, but I decided to post them any way, since they’re all I have. Click on them to view the slideshow, as usual. I might add more shots if some of the very friendly people that were onboard send them to me.

We put into Victoria around noon, had two and a half hours ashore and set out again. Since all the whale watching skippers constantly update each other by VHF on pod locations, ours knew were to find them again on the way back, and he headed straight north to Active Pass, where the ferry from Tsawwassen crosses through the Gulf Islands.

e had another great encounter and finally, reluctantly, we let the whales move away undisturbed through the narrow pass, while we headed north via a different route towards Vancouver, where we arrived just on time for a gorgeous sunset.

The crew, husband and wife who split their time between Victoria and Antartica, were fun and interesting, efficient, competent and they respected the whales and showed outstanding boatmanship. I suddenly felt very much home sick (if Little Cayman ever was a home.) Being on a boat again, finding my sea legs, breathing the chilly salty air, feeling the wind’s caress which can turn into a bite, I was both completely happy and extremely sad.

As someone famous once wrote, “Once you have spent a while at sea, you never really become accustomed to land again. You tolerate it, at best.”