A Night on the Cape of Good Hope

Always, On the road, South Africa

It would seem the southern tip of Africa has two faces, one purely geographic and the other popularly romantic. Technically, the actual southernmost point is located some 200 kilometers to the southeast of Cape Town and called Cape Agulhas.

An extension of Africa’s gigantic landmass, that cape is wide and rather boring looking—on a map at least since I haven’t been there (we have since).

But if like me, you are a dreamer and cherish fractured memories of the adventures of Tintin et les cigares du Pharaon or those stories of the Flying Dutchman, you’ll ignore the previous coldly geographical truth and let yourself believe that in fact, the more famous Cape of Good Hope is as far south as one can venture in Africa without dropping off into the ocean.

Hanging from the bottom of the Cape Peninsula, the Cape of Good Hope is much sexier than Cape Agulhas. Slender or even narrow, cliffy, dominated by a white lighthouse, inhabited by herds of antelopes and part of the Table Mountain National Park, the Cape is so close to Cape Town it can easily be visited in a half-day excursion. It isn’t truly the southern tip of the continent and if one could see that far, the landmass of Cape Agulhas would loom in the distance to the east and the south but since it’s out of sight, it’s also out of mind.

The biodiversity on the Cape Peninsula is extraordinary, so much so that the Cape Floral Kingdom—one of six kingdoms worldwide to define geographical

flower arrangements, so to speak—is the smallest but richest of all six. One big flower bouquet at the foot of Africa.

Table Mountain National Park is a very popular tourist destination, as one could imagine, and even away from Table Mountain, the road going through the southern part towards Cape Point and the Cape of Good Hope is a rather busy artery winding through a large plateau covered with fynbos and inhabited by baboons, ostriches, bokkies and mountain zebras.

Much less visited and almost forgotten by even the locals, however, is the road that branches off to the west and leads to Olifantsbos. All the way at the end of that road, away from the crowds and buses, a small sandy beach is home to a few families of baboons. And even further, beyond a locked gate and around a corner that makes it invisible to the civilized world, hides a wonderful cottage rented out nightly as a self-catering unit by the park administration.

This is where Marie’s parents had very kindly decided to take us for our last outing in South Africa. The following night would be our last in Constantia and then we were flying back home to North America. The four of us drove there in a howling southeaster that left Henri very worried about his early morning bike ride. He was bringing his bicycle in the back of the Kombi hoping to get a training ride done in preparation for the March 100 km Argus bicycle race which, at 75, he still rides every year. (I rode the Argus with him the following year)

We picked up the cottage keys at the Park 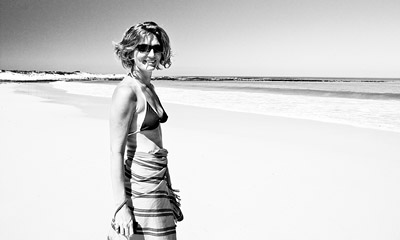 Headquarters on the main road and backtracked to the junction that marks the entrance to peace, quiet and magic. From there the nicely paved road stretches for kilometers in a straight, slightly descending line to a deep blue ocean. There are sometimes herds of ostriches and bokkies—bonteboks, elands, and hartebees—grazing on each side. The road then curves left and south, reaching the final parking lot next to a beautiful cove where we had a picnic last year. But we now had the key to a padlock guarding the gate to further privacy, a gate we left open for Marijke joining us later.

The cottage soon appeared, nested between a huge outcropping of limestone rising right behind it and the ocean, dark, foamy and insanely agitated by the gale force wind. We took possession of Waves were still crashing madly a few dozen meters away and the walk of a few braves along the beach turned into a challenge, sand flying horizontally and hitting one’s face with the loving softness of coarse sandpaper.our new domain with pleasure and relief, careful not to let the doors slam. The interior was very nicely done and our room perfectly cozy. There was a smell, though, that instantly reminded Marie and me of our first trip to the area where a seal had been decomposing on the beach. It turned out to be a poor lizard that had managed to get squashed between the sliding window and its frame. The dead lizard removed, everything was peachy.

The wind was abating slowly and Marijke having finally arrived, we went for a walk up on the hill. Our map mentioned a WW2 submarine watch station which I wanted to investigate. On our way up, we found strangely shattered pieces of turtle shell on the path. Our only explanation was for birds of prey to have broken them by dropping them from up high. Who knows?

The fynbos here was as nice as everywhere else and the

girls soon got distracted. I left them behind momentarily to visit the watch station on the edge of the cliff and when I came back just a few minutes later, they had disappeared. Trying hard to suppress childhood memories of a spooky movie I’d seen about kids vanishing on an excursion around Ayers Rock, I looked for them for quite a while. Then I decided to head back down, following footprints I’d recognized on the semi-sandy footpath. The darlings were already back at the cottage, having decided I was nowhere in sight and could take care of myself. Women! I made a mental note to brief Marie better for our Everest attempt next year. Or the following.

Waves were still crashing madly a few dozen meters away and the walk of a few braves along the beach turned into a challenge, sand flying horizontally

and hitting one’s face with the loving softness of coarse sandpaper.

Dinner prep was launched. I’ve forgotten what else we ate because there were boerewoers and those alone require my full attention. The gale weakened during the night and when I woke up bright and early to go on a run, the sun was shining merrily and turning the day into a complete opposite of what the previous had been. Henri had already left on his bike ride.

I put my running shoes on and decided to carry the G10 along, hoping for some game to be around that early. The heat took me by surprise. Not a whisper of wind and already, no later than 7:00 or 8:00 am, I was sweating profusely. I ran slowly and took pictures here and there. I had been right about the game, they were everywhere! I saw a huge herd of elands in the distance, losing my count over 40.

Bokkies were crossing the road ahead of me, transiting to the beach. They never let me get very close, obviously much more wary of a runner than a car. I must have looked like a fearsome cheetah.

I could not have run more than 4 km before I had to turn back with a side ache. I generally do well if I pick up a steady pace and don’t ever stop but taking pictures and getting excited every time I spotted an animal was quite exhausting. Still, what a wonderful, exhilarating run. 8km in the middle of nowhere, or rather the middle of the Cape of Good Hope, completely alone with the wildlife, with no other humans around for miles apart for the sleepy loved ones I’d left at the cottage – it was heaven. The air smelled of ocean spray and flowers were everywhere. Ostriches could have raced me and won, but my ego didn’t suffer. They are,

after all, the fastest running birds on Earth.

Breakfast soon followed my return, then a walk on the transformed beach. Turquoise water, calm oily surface, white sand and the cry of seabirds. It was perfect. We all reflected on how extraordinary it had been to see both weather faces of the place, in such a short interval.

At last, we had to vacate the cottage. We drove all the way down the tourist lane to the actual Cape and its lighthouse and had lunch in a restaurant overlooking the bay, far above the water. The weather was pristine, so was the ocean. Lobster fishing boats crawled way down on the scintillating surface. The world appeared endless and immensely magical. We were standing on the Cape of Good Hope. There was, in the end and at the end, a lot of it. Hope, that is.