A run around the new Vancouver Convention Centre

As the new Vancouver Convention Centre finally opens its doors and stands proudly next to Canada Place in the most urban-ly futuristic part of our downtown core,

the Seawall regains an uninterrupted length of thirty-something kilometers from the east side of Canada Place, along Coal Harbour, around Stanley Park, down into False Creek to Science World, past the Olympic Village, through Granville Island and on towards Kitsilano and Point Grey.

A few days ago, I rerouted my run away from Stanley Park and towards the new Centre for a first run-around, G10 camera in its pouch 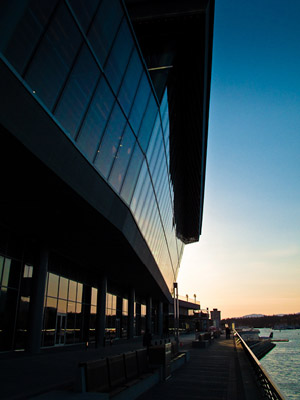 and eyes very much alive. I must say that the new complex is extremely impressive outside as well as inside. I haven’t had my official guided tour yet but attended the Clef d’Or – Tourism Vancouver Showcase on Thursday and was blown away by the main exhibition hall and its gigantic glass wall opening unto Burrard Inlet and the North Shore.

With 473,532 sq.ft. of usable space, the Vancouver Convention Centre positions itself strategically and offers one of the most incredible settings worldwide. Sustainability was at the core of design for the new West Building. It features a six-acre living roof housing indigenous plants and recovering rain water for irrigation, sea water heating and cooling, a water treatment plant, and fish habitats have been built into the foundations since most of the building stands on stills above the water. 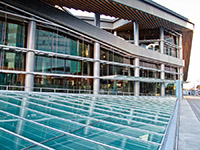 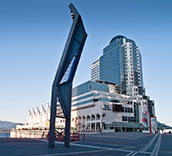 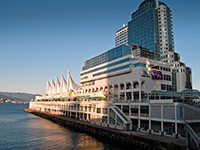