A Train Up The Hudson

Visit to the remains of West Point Foundry, Cold Spring
New York, On the road, Photoblogs

Like a giant – if anatomically incorrect – octopus, five main Metro-North railroad lines and their sub-routines spread from Manhattan and Jersey City, fanning up into the states of New Jersey, New York and Connecticut. They constitute a commuter rail system with over one hundred and twenty stations, serving three states and reaching some ninety miles out of Penn, Grand Central and Hoboken in multiple directions.

Commuting here does not come cheap considering that the maximum one-way fare at rush hour on that grid is about thirty dollars, while a one-way ticket on Amtrak to Montreal – you know, that’s the funky place over three hundred and seventy miles away up in Canada that I visited recently, notoriously home to Eskimos, igloos, the Canucks and an unbearable auditory abnormality called Céline Dion – costs under seventy bucks, or roughly twice the price for four times the yield.

That being said, I love the train, along with all transport machines, and the Hudson Line happens to run exactly two-and-a-third blocks from home, Harlem 125th Street Station being the second stop after a grand downtown terminal. How could one resist?

125th Street from the station platform

So when my urban fuse blows and the colloquial substance hits the proverbial apparatus, my instinct is to run home. That would be aboard any vehicle intent on carrying me away from a stagnant location towards exotic, challenging, camera-friendly, self-reflective, comfort-zone-shifting, reference-set-cancelling, different, away from routine, often disappointing but never taken for granted, at times sublime, I-was-there-and-now-I-am-here-type environment. Home, they say, is where the heart is. Well my heart is torn. Pieces of it here and there, Antibes, Aix, Beloeil, Vancouver, les Calanques, Sainte-Victoire, Chamonix, Little Cayman, Club Med 2, Cape Town, Namibia, Brooklyn, a roof, a black cat.

But because of that explosion, that supernova of places once called home and felt dearest ever, I now seek home in the absence of itself. I find home aboard a plane, a train, a car even, in a beautifully silent Constantia garden, not mine ever to groom, or in an airport, with many miles ahead and a seat to claim – in a word, away.

Now, that being said, my ultimate concept of home has always been a physical place, roofed and flowered, where roots grow deep and one comes back regularly to put tired feet up, clothes dusty, a drink in hand, and takes a deep breath, fulfilled to have returned, and smiles to the mate. As in soul. Marie and I are working on that. The mate has been found but the place is still being sought.

So for now, I will focus on the previous – somewhat shifting – definition of home.

Steering the story back to New York City, I recently left home headed home, or the Harlem apartment for a train ride. On my flight plan, plotted, computed, analysed, cleared and ever-so quiet, was an old acquaintance, Cold Spring on the Metro-North line to Poughkeepsie. We had previously done the hike (1,2,3), I just needed to be away. No altitude gain required, it was all about leaving sirens, drumming, neighborhood hum and slamming door noises behind, and drifting into a softer, mellower environment, some nature, a walk.

The Harlem train station is a bit of a zoo. At street level, homeless wanderers, panhandlers, dealers and other specialty specimens share the stage with more conforming citizens. When I walked in, maneuvering towards the ticket dispenser, three cops were lazily leaning against the handrail of a mezzanine, taking in the sights, ignoring the spitting, the swearing, the begging, the sneaking, the lurking, the loitering, and focusing either on serious crime or the next donut break, I could not tell for sure. 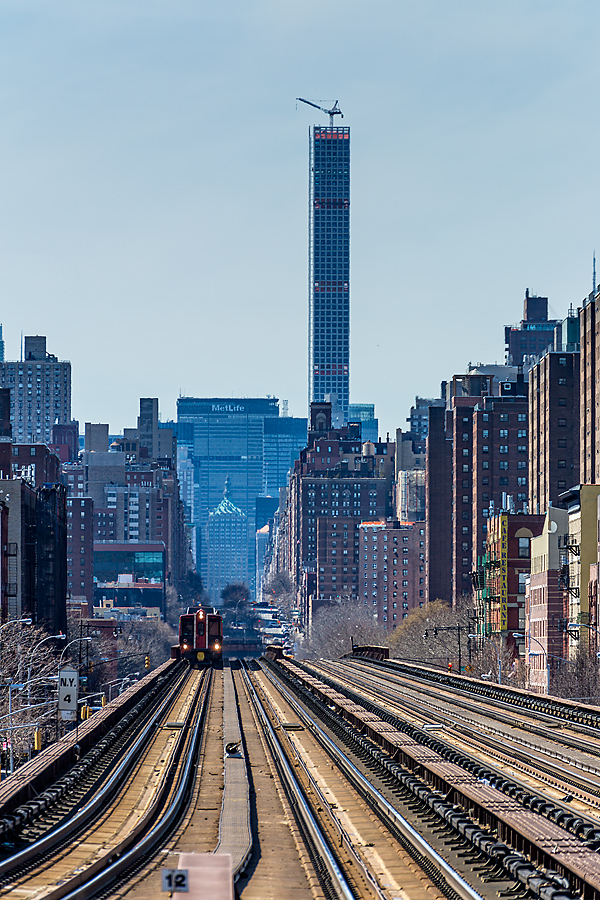 Once on the elevated platform though, the wind began to blow ugliness away and far, far to the south, where tracks blended into a disheveled skyline and disappeared underground, I focused my attention and prepared for the occasional three lights, rising from nothing, through a spring day’s mild heat blur, shaping up into a locomotive and growing fast and loud as a whistle blew and a train materialized, northbound and on time. Mine was third.

Train conductors seem to be placid people. They must have long ago accepted that their life is a yo-yo, back and forth, up and down, forward and aft, trip after trip, day in, day out. A bit like pellets. They travel one way, punching neat holes into small tickets, then they go back and perfect their work, their shift traveled along like a finger glides down a timetable. Mine, his hat pushed so far back only a thick union contract could have held it up on his head, perforated my ticket in a swift, consumed motion, handed it back – I was a round-tripper – and placed a paper decoy on top of the seat ahead of me.

I settled in. Backwards as it turned out, my car having been southbound-facing. The trip up the Hudson lasted about an hour. Time enough to think, to text South Africa, to wonder and ponder the why’s and whether’s and to look out the window in awe, because what I saw was not my daily game.

Getting off in Cold Spring, I adjusted the backpack straps and resolutely veered away from the platform’s main exit, aiming for a small path that sloped off the empty southern end into nature. I had arrived.

South of town, a large estuary-shaped marsh has obviously benefited from the building of railroad tracks, which, cutting across and following the river’s natural curve, have created a small ecosystem. The likely source of that cove is Foundry Brook, a pristine stream which once played a history-heavy role. 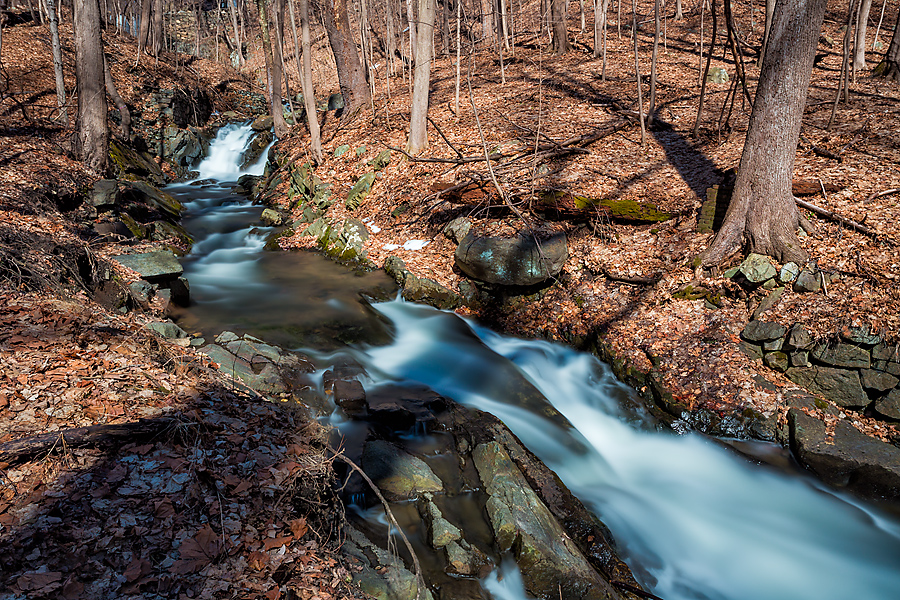 An ironworks setup in the wake of the War of 1812 to replenish armaments at a time when Napoleonic Wars were finishing to shape up the Old World, the West Point Foundry operated in Cold Spring for nearly a century, producing, among other heavy weights, an iron ship, great locomotives, New York City water pipes and the infamous Parrot Rifles of the Civil War. The site had been chosen for various reasons, a symbolically protective shadow cast by nearby West Point Academy not being the least of them, but the stream provided power to the foundry and was thus its heart.

As I walked along a slightly muddy footpath, just a few minutes from the tracks, I unexpectedly ran into a trio of deer. Coming to a grinding halt, I quickly changed lenses and snuck through the trees in my best Mohican impersonation, shadowing the animals for a while, careful not to cross an invisible boundary between tolerable annoyance and plain threat.

Snow lingered on the ground and the air was chilly. I had trouble imagining the flurry of activity, blazing furnaces, boats docking and men shouting that would have been the norm so long ago. Very few people around, on this twenty-first century afternoon, and only a couple of ruins remained to whisper about their past. 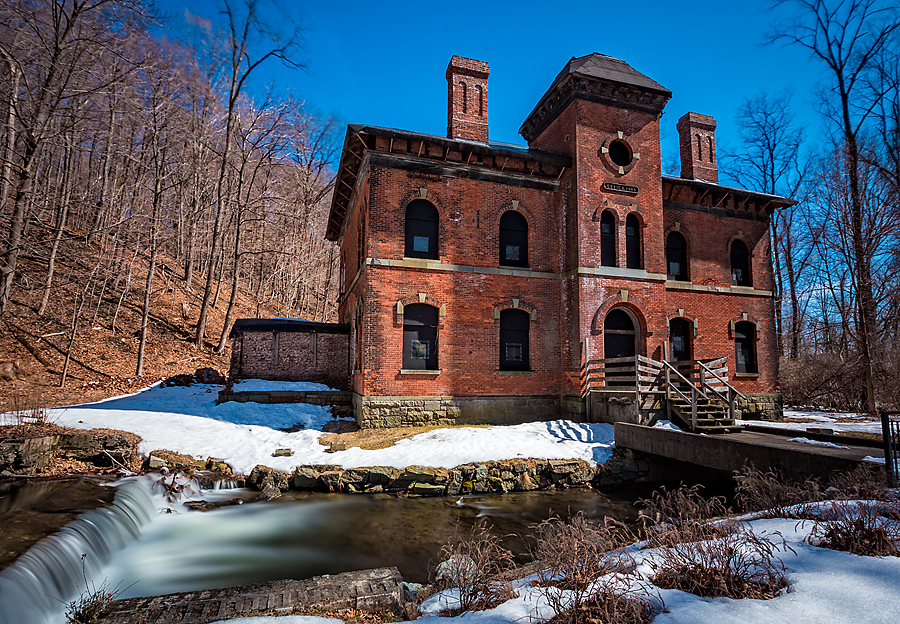 I setup my tripod and shot a series of five-minute-long exposures, a timer ticking and my mind emptying itself of all things but the present, like an Imperial Cruiser dumping garbage before a hyperspace jump. Yes, that is a Star Wars reference. Then I bracketed for a while longer in an effort to win the tug-of-war opposing me this time, in the eternal fight for details, to a high-contrast abandoned old house and a stratospherically-deep blue sky.

Back in town, having missed my hourly train by the exact amount of time it took a poorly trained barista to summon the ingredients required for my latte, I strolled along to the Hudson where a cold wind blew chunks of ice downstream. The ducks didn’t seem to mind, but then again better cold there than salted in prosciutto.

Ending up early on the station platform, I reflected on how easily accessible this little-known spot is, a mere hour away from the city’s exuberant madness, and how narrow the gap is between peace and folly.

A whistle finally blew, I stepped aboard, chose a westward window seat and let the hypnotic railroad song rock me back home, as the river shone yellow in the glare of a plunging sun.