A Visit to Cape Agulhas, Southernmost Tip of Africa

Where fiction and reality mix like the currents that run offshore
Photoblogs, South Africa

In 1488, when Portuguese explorer Bartolomeu Dias rounded a spectacular Southern African cape in his effort to establish a route towards the Far East, he named it Cape of Storms (Cabo das Tormentas) – it would later be renamed Cape of Good Hope (Cabo da Boa Esperança) as it indeed brought hopes of a new route to India. He had found the tip of the Cape Peninsula south of Cape Town that I have already posted about, see An afternoon on the Cape of Good Hope and A night on the Cape of Good Hope.

Days later, Dias rounded another cape further south and, noticing that the needle of his compass 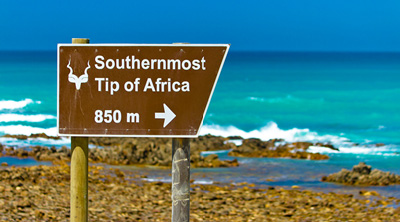 coincided with true north in that area, he called it Cape of Needles (Cabo das Agulhas); it became Cape Agulhas.

Strangely, and probably due to its dramatic geography, it was the Cape of Good Hope that would go down in the annals as one of the Great Capes despite the fact that it is not literally the southernmost tip of the African continent.

The three Great Capes have historically played a key role in navigating the Clipper Route, a one-way sailing run leading from Europe, down the Atlantic, around Africa’s Cape of Good Hope, past Australia’s Cape Leeuwin, all the way to South America’s Cape Horn and back up the Atlantic. These capes were, and remain to this day, potentially quite dangerous; but they have a mythical and fascinating appeal. To a navigator, a Great Cape has a personality and its many changing moods present particular challenges and the corresponding rewards – or doom.

Cape Agulhas is located at roughly 34°50’S, near the southern limit of so-called Horse Latitudes – a narrow zone of relatively calm winds, dry climate and warm temperatures located just below the much wider area of easterly trade winds. Great Cape or not, Agulhas sits at the focal point of much natural conflict: the nearby Roaring Forties, a latitude band 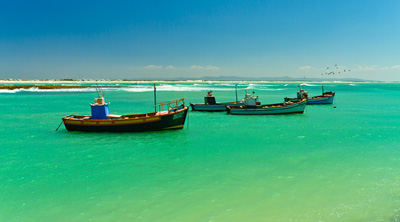 between 40°S and 50°S, unleash their strong westerly winds and cold currents against the warm southbound Agulhas Current, causing maritime havoc and tremendously hazardous waves. Many ships were lost there throughout the centuries.

The cape itself isn’t quite as spectacular as its better known cousin the Cape of Good Hope. The coastline is somewhat curved but not chiseled, and of relatively low elevation. Slightly east of the actual cape, rocky shores give way to a shallow bay and beautiful sandy beaches. Located one hundred and seventy kilometers southeast of Cape Town, the tiny town of L’Agulhas, just east of the cape, remains essentially supported by the nearby fishing town of Struisbaai and the newly found golden egg of tourism.

Just beyond town, past an old lighthouse on a short dead-end road, a small rocky parking lot serves as a turn around loop. There, on the edge of a pebble beach flanked by sharp rocks, a simple plaque states the otherwise ambiguous fact that one now stands at the southernmost tip of Africa and geographical meeting point of the Indian and Atlantic Oceans.

But as modest as the surroundings might be, there is something magical about standing there. Looking north, you are facing the gigantic, colorful, exotic, 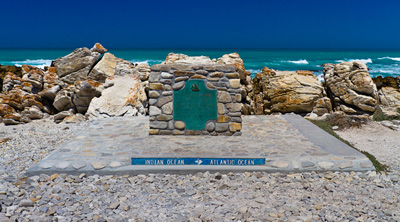 So having driven in from Stanford, Marie and I took turns being the southernmost human beings in all of Africa, and then we attempted to set a cheesy record of the day with the southernmost kiss on the continent. Whether the record will have lasted is up to the creativity of many visitors to come. But another record probably still holds: we were the southernmost, most in love couple in Africa. Wink, wink.