This year’s visit to the townships of Khayelitsha and Nyanga was radically different from the last one. A year ago, we had been on the purely touristic track at the very knowledgable hands of our friend Thabang.

A micro-farm in Nyanga

This time, guided by an insider of a different background – Rob Small, activist at heart and micro-agriculturist – we visited various outposts of Harvest of Hope and the Abalimi Bezekhaya organization, which describes itself as follows:

“… We are an urban agriculture (UA) and environmental action (EA) association operating in the socio-economically neglected townships of Khayelitsha, Nyanga and surrounding areas on the Cape Flats near Cape Town, South Africa.

Abalimi means: ‘the Planters’ in Xhosa, the predominant language among our target community. We assist individuals, groups and community based organisations to initiate and maintain permanent organic food growing and nature conservation projects as the basis for sustainable lifestyles, self-help job creation, poverty alleviation and environmental renewal.”

There is a lot to say about the brilliant efforts of Rob and his peers, and I am one of the least qualified to do so. Marie has posted extensively about them on 66 Square Feet and I encourage everyone to read that, as well as visiting the Abalimi and Harvest of Hope web sites linked above. 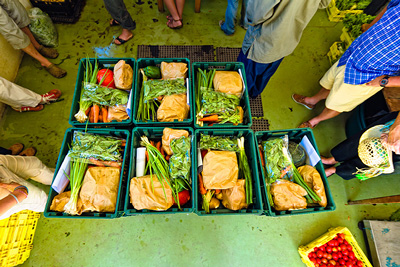 We joined a public tour led by Rob and while Marie was researching a future article, I went along with my camera, hoping to digitally capture a little more than just sweat and hard work. I was hunting for glimpses of harmony hidden inside of the harsh reality of townships.

These casual photos are a foreigner’s view of issues so important, they affect the entire world. As Rob likes to remind us, half of the world’s population is fed by micro-farming, the very kind he helps promote, and which we were witnessing first-hand. 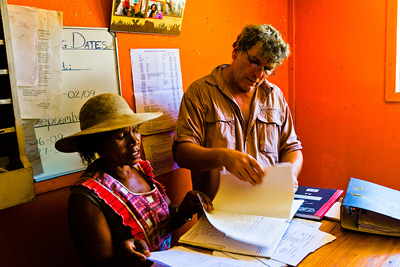 Mabel Mokolo and Rob Small at the Nyanga Garden Centre

If the pictures seem artsy and appealing – surely a misrepresentation of such a harsh environment – I’ll call that my own personal way of dealing with reality. Life in the townships is beyond description. But a few folks are leading by example and working to feed themselves and the community, in small doses and through hard work.