Aerial Thoughts, Lost in the View

Most of this was written at 38,000 feet above the Gulf of Guinea
Airborne, South Africa

A bump. Just a bit above the equator, we were skimming the coast of Liberia at thirty-eight thousand feet. It was a precocious two thirty in the morning, Cape Town time. Towering menacingly above our right wing, an enormous cumulonimbus was unleashing its brutal power and every few seconds, lightning erupted deep in its bowels and illuminated the giant from within. All around it, though, stars were shining coldly and with all parasite lights off–including my laptop–I could make out the Big Dipper, sketched low on the northern horizon.

There was a feeling of mighty power in the air, as if ancient gods had been arm-wrestling just outside the cabin, allowing us mere mortals to watch, and possibly letting us live to tell the tale. The sheer contrast of a seventy degree Celsius and six hundred mile per hour differential, sealing the void between my pressurized bubble and the vacuum of their playground, made me wonder how fragile my journey’s legs really were. 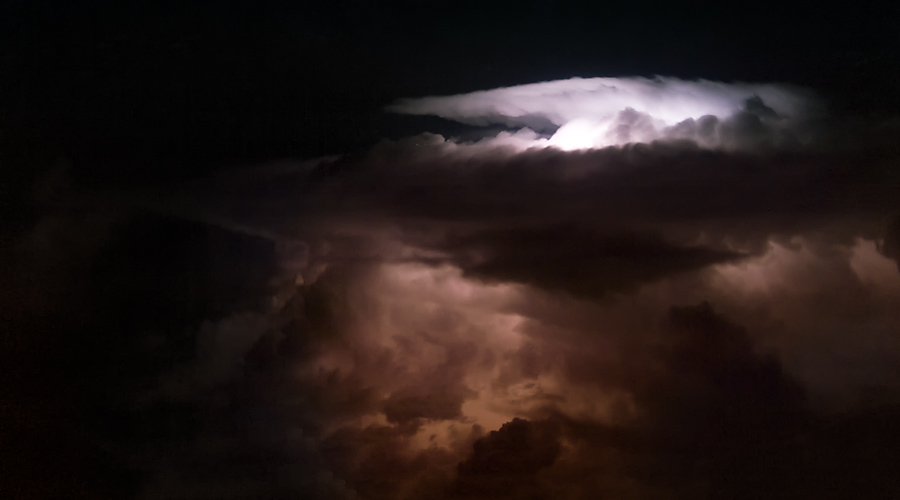 2 AM – Equatorial storm off the coast of Liberia

Our next stop would be Dakar, Senegal; technical mostly, and annoyingly long. Then, having traded a few passengers and likely been fumigated without even the option to disembark, we would take off again for the Atlantic crossing, leaving a bruised Africa behind and leaping towards the New World.

Luckily, this South African Airways A340-600 was not full. Marie had been able to score three seats in a row at the very back and had now disappeared under a red blanket, seeking elusive sleep in a buckled up contortionist position. Alone a few rows away, I was looking out a window, back at the past two weeks and forward to a good shower.

This would be as rough a homecoming as they get, our best friend and mentor, a black cat with a voice like a bird and a panther’s whiskers, would not–for the first time ever–be waiting for us. Neither would he greet us at the door, lead us to the food bowl, purr reluctantly or be a smart ass. Those days are gone and we do not know yet what replaces them.
Alone a few rows away, I was looking out a window, back at the past two weeks and forward to a good shower.

Cape Town this time had been sweet as ever, but bitter too. A great escape and slow healing, and the usual beauty. It had been home, yet we were flying back towards another. It had been warm and soon we would be shivering. It had been short. But so are most good things.

That very morning, a figurative foot in the door, I had been sitting with Marie in the most luxurious garden having simple breakfast, looking up at an immense sandstone slab a kilometer high perched as a crown above the whispering trees, and birds had danced around as we sipped our espresso, and while fleeting, the moment had been perfect, if unavoidably sad.

So there I sat, my nose pressed against multiple layers of a fast aquarium in which water molecules were painfully absent, staring at the subtleties of darkness and seeing myself in return, given by the seventeen-hour-long night a penny for each of the thoughts I was lost in. I fired up the computer again, launched Lightroom, dimmed the display and began collecting and sorting dabs of sky, patches of earth and the many mesmerizing patterns only an aerial view can reveal.

These were taken at random on two trips and six different flights, thus, somewhere between the apogee and perigee of transits into New York, Montreal, Johannesburg and Cape Town. They bear, as always, the blur of jet exhaust and the mark of altitude and window scratches. 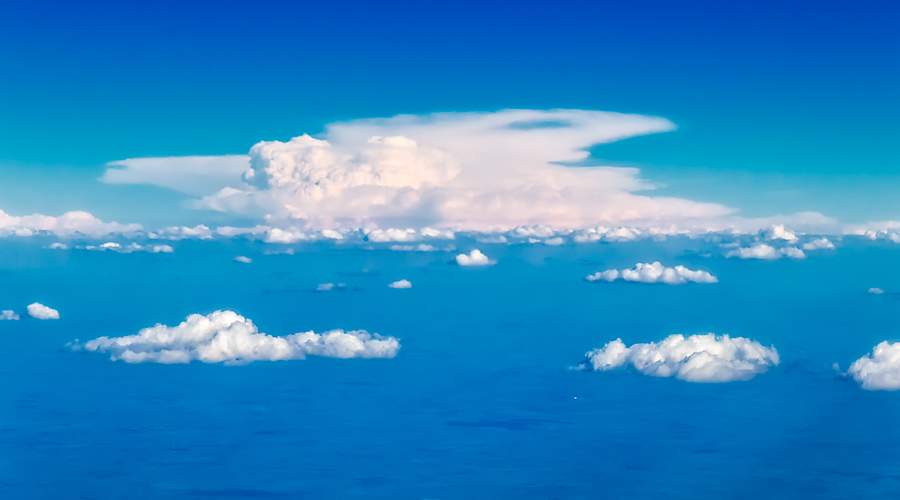 Daytime version of the cumulonimbus above

But we are lucky that our vehicles have windows. It could easily have been different. Had our species been driven by more fear than curiosity, we could have ended up with opaque transportation designs intended to protect us from the very knowledge of travel and to remove distance from the equation while only leaving time. We would embark a blind box at point A, wait a given number of hours, minutes, drinks and movies and emerge at point B, as though it was the world that moved to accommodate us. Our senses would not have recorded much motion, our imagination not been tickled by ever-changing scenery.

Even now, so many people board a plane or a train and never look out the window, immersing themselves instead into a fiction of their choice, electing to ignore the imperfect reality of movement and space.

But the windows are there. Among the great engineers of our times, others like me take immense pleasure in watching the planet go by. It is beautiful, sobering, fascinating. So the machines they create have little transparent openings in them, and we stare through the plexiglass, and we see things that we recognize, and others that are unknown. And by taking the time to look and wonder, we push our horizon just a little further.

I guess I am going to keep pushing.