This year’s trip to South Africa was a textbook example of glitchless-ness. We rose at dawn in Brooklyn, left the apartment at 7:15 AM and caught 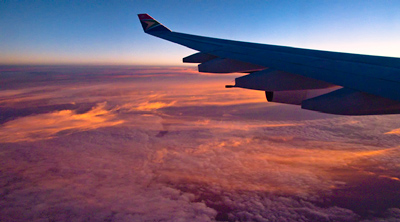 a cab a block away on the taxi corridor as we always do. The driver accepted to tackle Atlantic Avenue rather than the BQE, a cheaper, more pleasant and usually faster approach to JFK from our ‘hood.

At the aiport, there were no more than a handful of passengers in the line to the South African Airways counter. Bags were tagged and boarding passes issued all the way to destination and we then dropped off our checked luggage ourselves for screening. We headed down to the security checkpoint and were stunned to find it empty. Last year’s line had stretched half the terminal’s length and taken an eternity to process.

Our 10:30 AM flight boarded as scheduled from a quiet gate and left on time. The Airbus A340-300 was probably 80 to 90% full. We took off on a southwesterly heading, made a wide climbing turn to the left, came back over Jamaica Bay and then settled on an Atlantic crossing course.

The cabin purser had a surprise for us on the first announcement. We had expected a technical stopover in Dakar would be inflicted upon us like the previous year, but were informed that the 14:30 hour long flight would be direct to Johannesburg. Marie leaped in her seat, thrilled. She hates unnecessary landings and take offs.

I was initially a bit disappointed myself. I had found the moody Dakar stop interesting – arriving in the middle of the night, backtracking down the runway to exit at the only taxiway, the air foggy and warm, French signs on airport vehicles, grumpy officials climbing aboard and affiliated airline crew cleaning up our mess while we stood and stretched, not allowed to de-plane. But then they fumigated the cabin and the fun was over. And the stop was long, and half the flight remained afterward. No, 14:30 hrs non-stop was a much better deal.

With a selection of over 20 on-demand movies, the flight was easy and we never got bored – nor even really restless or uncomfortable. Lunch was served shortly after take-off and later, sandwiches remained available for the entire duration of the flight, along with water, juice, coffee and cookies, which I think is very civilized. Then breakfast was served some 2 hours before landing.

We crossed the ocean, catching up with the night about half-way across, ricocheted off the coast of Senegal, crossed the Gulf of Guinea and made landfall in northern Namibia, passing north of Windhoek and heading down in a diagonal across Botswana as the new day was dawning.

Sunrise was stunning and so were the later cloud formations over an extremely warm African land. We landed a touch early in Jo’burg, cleared customs much more rapidly than the year before, got our luggage and checked it back in for the short flight south.

We then left OR Tambo International at 11:00 AM and landed in Cape Town around 1:30 PM. The clouds had cleared shortly after take-off and revealed the Karoo in all its reddish glory. Our bags had followed us correctly this time and nothing got stolen. Marie’s parents were waiting for us with a flower and a hug. We were home free. 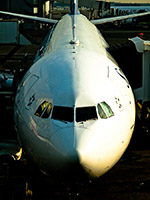