Aerial pictures of a winter flight from Montreal to New York LaGuardia
Airborne, New York, On the road

Being more accustomed to transcontinental flights these days – the long-haul, settle-in, find your sweet spot and economize patience and energy, ocean-facing departures, high altitude cruise and straight-in approaches, much movie watching despite the small screens, LCD’s reflecting the confinement, cabin crew diving in turns to their secret rest area below deck, flight crew doing the same below the cockpit, hours going by in slow motion while the world spins wildly below – I must say that my feathers are roughed by the ephemeral nature of commuter flights.

Recently aloft on a brief visit to Montreal from New York, I managed to control my plumage and was lucky enough to get a rather unusual overflight of both cities. Unusual for me that is, as JFK, my main hub, typically spills out into the sea. On the other hand, New York LaGuardia and Montreal -Trudeau – the latter forever known as “Dorval” to the people of Québec – are smaller and manage their airspace differently. 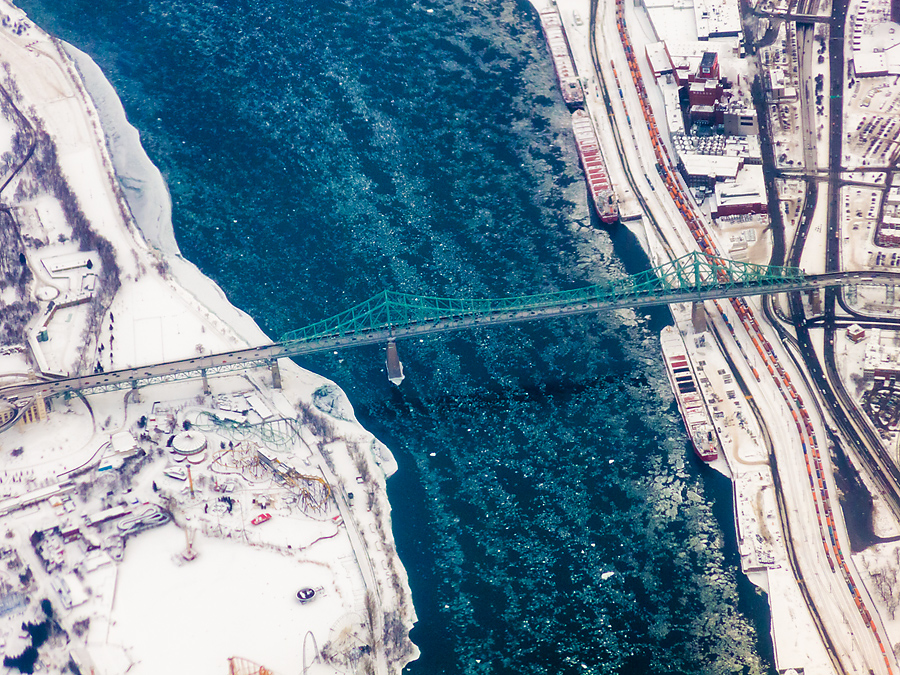 On the way back, weather in New York was icy, not to say dicey, and so having left the gate late because of an unexplained luggage connection failure, we were grounded by ATC1 for a half-hour while they crafted a new clearance for us out of thin and snowy air. We sat, engines off but seat-belt signs on, on a de-icing lot next to an American Eagle flight equally bugged down. When finally cleared, our captain took off from Montreal on a northerly heading and did a wide climbing turn to the right and over downtown.

Now pay attention class, as these are pretty good views of Montreal, Canada’s second largest city, as well as an explanation of why it ranks so low on the Richter scale of capitals. Cute, sure, but not so bloody big. An island, to begin with, or rather a couple; elbow room is restricted to suburbs.

The St. Lawrence River was not frozen solid but La Ronde, the amusement park that was the culmination of my childhood summer vacations, was.

We reached a ceiling at about the same time as we passed Brossard and low winter clouds engulfed us. The plane was not in true IFR2 conditions for very long and we soon came out on top, cotton-like sea below and contrails stretched above us across a deep blue sky.

That flight was smooth, the ominous sign stayed off, and a half-hour later, we began our descent into the busiest airspace in the United Space. 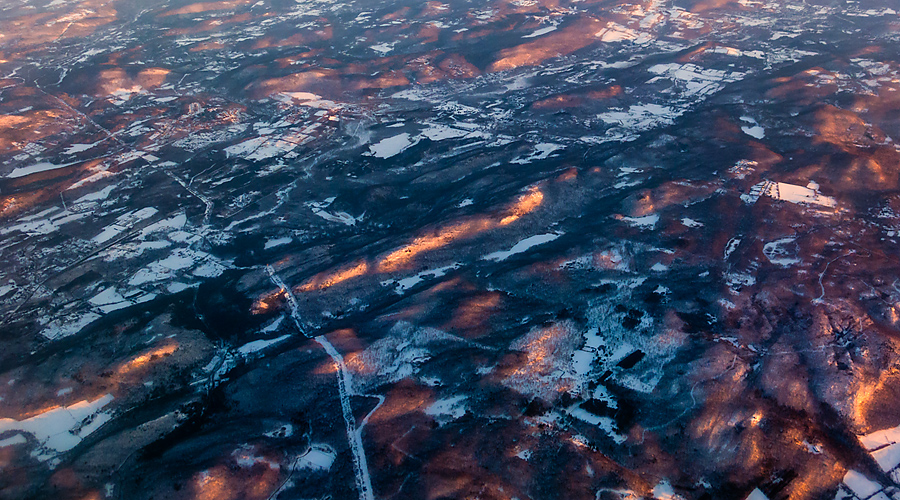 Vectored right and left over the Hudson Valley, we glided effortlessly above a snowy state flirting with the very last minutes of weak sunshine, high contrast shaping a world of shadows and highlights across the landscape as valleys plunged into the night while hills resisted valiantly, their tallest trees stretched up high into that orange glow, like flags on a defeated battleground, bugle relentlessly sounding the retreat and announcing sorrow to come.

Eventually, traffic control sent us zipping across the Long Island Sound from west to east, into the island herself. All right, I thought, we’ll be landing from the east. Not so. We leveled off at what seemed to be three thousand feet but could have been five, established well below the two hundred and fifty knot speed limit now, and turned again, aiming for the city. Leaving LGA below the right wing, we flew into Manhattan, turned sharp south over the island itself, and then left again somewhere over the Brooklyn Bridge, into the boroughs and back towards the airport.

Manhattan was now stretched to our left and the flight attendants must have been quite annoyed with my last five row and side changes, despite the mighty seat-belt sign being on and the landing phase initiated, but I ended up on the right, if ever left, side of the plane at the right, if ever right, time. 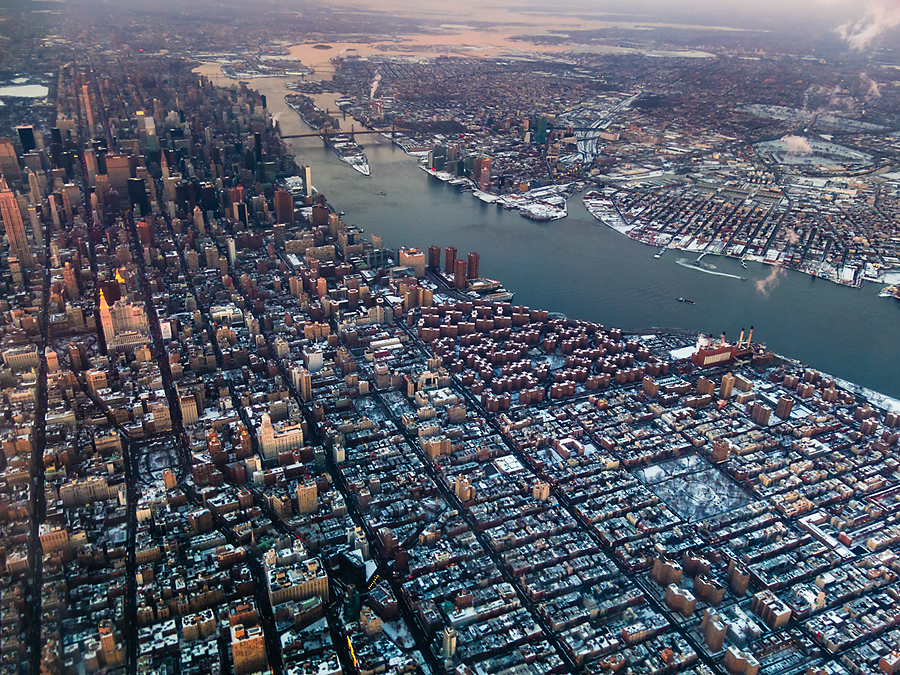 On approach over Manhattan – one can spot Union Square, left, and the evil Empire State Building

Approach speed was set, flaps came down, then the gear and pressing my face into the window, I had to admit I had no clue what we were doing.

Visual Approach Runway 31, it turns out. With a ninety degree turn to final just above tree tops. Impressive. But then again, this was an Embrauer E175, not and Airbus A340.

We kissed the runway, speed brakes came up and exited at the next taxiway.

I love the pictures. Low light, heavy noise and all, they make me feel good about the madness I was flying into. Mind you, they were taken with my Canon G15, through a triple layer of Plexiglas, despite ice crystals, water stains and inner scratches, through the blur of jet engine exhaust and with manual focus often set to an imperfect infinity. That’s the price one pays for flying backseat. Sigh.

Up front, they had no time for pictures, but the windshield was clean. And so was their conscience. I remember the absolute, complete drain of my cerebral abilities after a long IFR flight in actual IMC3, back in the days of flight school. I wonder if they got over it. Is it for them just like me going to work these days? Métro, boulot, dodo? Or is the flame alive?