Airborne, On the road, Photoblogs

Slowly sipping my coffee, I looked around me with unbelieving eyes. The large waiting area of gate A6 at JFK’s Terminal 4 was full. It was hard to grasp

that all these passengers were going to fit on board a single plane. But then again, the giant aircraft parked just outside in the cold, on a snowy tarmac, was no ordinary plane. The Emirates Airbus A380-800 about to whisk us over the Atlantic all the way to Dubai – at 41,000 feet and close to the speed of sound – was simply the largest passenger jet ever built.

Here a few numbers might be helpful to help put things in perspective: the four-engine A380 is an incredible feat of aeronautical engineering. With a take-off weight of about 600 tons, a wing span of 261 feet (79 m) and an overall length of 238 feet (72 m),

it has an operating ceiling of 43,000 feet and a cruising speed of Mach .85 at cruising altitude.

Its main characteristic is a full-length upper deck allowing for multiple airline-specific configurations that range from an 850 passengers cattle-like layout to Emirates’ split class arrangement that reserves the upper deck for business and first class, offering such amazing amenities as full beds, a lounge bar, spa and showers, while still accommodating a total of 644 passengers.

widescreen entertainment and power outlets. The overhead bins are enormous, there is more headroom than on most aircraft, cabin sound level is tremendously low and pressurization has been increased for greater comfort.

I had rarely looked forward to a flight with more enthusiasm. Neither children in a candy store nor Columbus reaching the West Indies would have been more excited than I was.

I must admit I had had an easy start. Having checked in online the previous evening, I had arrived at the airport via the AirTrain boarding pass in hand. JFK was packed. I had never seen so many people in an airport.

I’d sliced my way through to the Emirates online check-in bag drop counter, thus avoiding the huge main line-up to check-in counters. There had been three people ahead of me. Within 10 minutes, I’d had my bags wrapped and dropped off, had collected my complimentary long overlay hotel voucher and was heading for security, which turned out to be deserted. I’d gone through in no time.

With New York still recovering from the December 26th blizzard and all airports fighting to catch up with major delays, this was nothing short of miraculous. So I sat at the gate and waited.

finally boarded, I proceeded to my seat, 81K – chosen with the help of Seat Guru – about the best seat in the house. It is located just aft of an exit row and while being a window seat, it doesn’t have anything in front of it and allows absolute freedom of movement and complete leg stretch, a great perk on any twelve hours plus flight. The look of envy on other passengers’ faces was almost painful.

While waiting for a slow departure and then de-icing, I began exploring the incredible video entertainment system. It offered 1200 channels, hundreds of movies, TV shows, news, cartoons, hundreds of radio stations and music channels, video games, 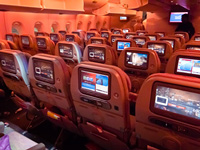 Dubai information, route tracking and live views of fuselage-mounted cameras, in-seat email and SMS (at a cost), seat to seat calling, an alarm clock, a music player, an option to plug an iPod or camera in via USB, was customizable and came complete with a full keyboard on the back of the remote control.

We left two and a half hours late, thanks to the snow that had caused a shortage of ground crew. Taking off towards the west, we did a wide climbing turn to the left, flying over the Rockaways and across Long Island on our initial northerly course to a great

circle route that would lead us over Reykjavik and into Europe from the northwest, making landfall somewhere over Scandinavia. Estimated time en route: twelve hours and twenty minutes. Distance: 11,000 km.

A visit to the bathroom revealed a spacious, well designed space with wood-like panels and toilet seats, two mirrors including a full size side one and digital sink water temperature control. Throughout the cabin, color-coded panels indicated in real time the location of occupied lavatories vs free ones.

Dinner was served, beer and wine poured, and I settled into my seat to explore the movie programming. A few hours into the flight, we met a fast advancing dawn over the ocean, like time travelers riding a monstrous machine.

The moon sank far to the

south and as we rushed into the sunlight, 280,000 pounds of thrust pushing us hurriedly towards a new night just below the speed of sound, contrail in tow like a distant proof of life, I momentarily forgot my roots and lost my chains.

I was adrift, I felt free, I didn’t belong anywhere in particular, home was here and there, where the burden lightens. That airborne day would be brief – five hours after sunrise we would already be meeting the night head on, and it would engulf us and the sky’s icy grip on the plane would suddenly become more tangible.