An Aborted Hike Up Devil’s Peak

Last South African summer, which means our winter, my father-in-law Henri and I, encouraged by our successful hike up Table Mountain’s aerial India Venster trail to the upper Cableway station, eventually figured out we had to recidivate. For our next target, we picked the Devil’s Peak Mowbray Ridge trail, aiming at conquering the mountain via its northeastern and very sheer flank rather than using the usual city donkey route to the southern saddle. 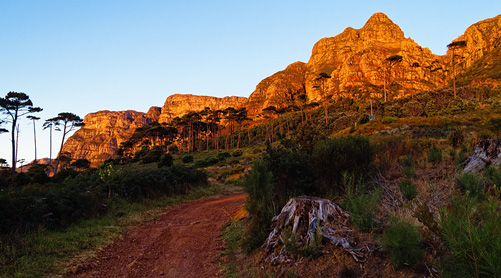 We set out very early as always but soon discovered that on a week-end, the bottom gate to the road leading up the mountain side to our Rhodes Memorial trailhead was closed and we’d have to walk an extra 2 or 3 kilometers partially uphill. We were already pushing our luck a bit in terms of distance, grade and overall difficulty, the round trip trail being at least twice as long as our one-way India Venster itinerary.

But we persevered. I had instructed Henri to let me know if things got too rough, too sheer, too soon, and he had heartily agreed. I was being led up by someone who knew the route, and therefore, in good Alpine guiding tradition, I was the client. But I was also the fittest, and hiking with a loved one made me ultimately responsible for the outcome and safety of our outing.

There had been recent reported muggings in the area and both of us carried a pepper spray. Mine was at the ready, had been tested and would be fired at anybody who even looked too hard at Henri. He walked in front, both to lead the way and to set the pace. He is 78.

Henri leads the way up the trail

By the time we reached the actual trailhead, we were already lagging on our planned schedule. The sun had risen and was rapidly setting the mountain ablaze in beautiful tones of orange and red. It would soon be very hot. Mostly east-facing, the trail was not going to offer much shade.

We climbed directly towards the first recognizable landmark, the King’s Blockhouse, nested above Rhodes Memorial at the bottom of the actual cliff. Upon reaching it, we took a well deserved break and looked at the world for a moment. A trail runner appeared from nowhere, threading lightly and swiftly on the rocks, touched the blockhouse wall with one hand like a kid playing tag, turned around and launched himself almost vertically into the path down the mountain side. Henri and I were a little disgusted.

That must have ultimately played a roll in triggering Henri’s resulting decision; very smartly, he decided that given the current time, his already draining resources, the sheerness of the remaining climb right into the mountain face, our intended shortcut via the exposed Knife Edge traverse and the necessity to climb it all down once at the top, he wouldn’t make it. I handed him a Gu energy gel and agreed. It was the right move to make. We had to abort. Devil’s Peak would have to wait.

Looking across the Cape Flats – Amazingly, the twin old cooling towers are gone

We took our time, found a much nicer path through heavy vegetation and aimed for the Kombi. At one point, we saw a solitary man crawling along a steep rock face, aiming away from all trails and possibly towards an isolated cave, two plastic bags in his hands. “That,” Henri said, “could be one of the perpetrators.” He meant the muggers. Mugger or not, the solitary man was obviously a bergie. Lonely life.

Marie had made us delicious sandwiches. I ate mine on the walk down. We were back home in time for another breakfast. I’ll go back up there, some day. It’s a beautiful place. The muggings must stop.