An afternoon on the Cape of Good Hope

South of Cape Town, all the way down the Cape Peninsula, part of the Table Mountain National Park and next to Cape Point, is the famous Cape of Good Hope, southernmost part of the peninsula and often (falsely) labeled as the bottom tip of Africa.

the cape was initially named Cape of Storms and certainly has claimed its share of wrecks. Just a mile offshore, the warm Agulhas current coming down from the Indian Ocean clashes violently with its cold counterpart the Benguela as it heads up the western coast of Africa to a foggy rendez-vous with the Namib Desert.

Some tales claim that the legendary ghost ship Flying Dutchman was doomed to eternally sail the ocean while attempting to round the Cape into Table Bay. When looking out to sea from such harsh, desolate shores, it isn’t hard to imagine the sailors fighting against mother nature’s fury in the darkest of nights, the wind hauling through torn sails and waves crashing down on decks with maddening strength.

Yet on a sunny afternoon, as we walked down from the Cape Point parking lot with our picnic, leaving the crowds behind and entering a world of high cliffs and sandy perfection, peace was all around and soon inside of us, too. The many wooden stairs leading down to a secluded little bay just east of Cape Maclear are steep and high enough to deter most tourists and we found ourselves just about alone once we got to the bottom.

The wind was blowing steadily and we first sought shelter from the sun in the shadow of one of the great stone walls. Swimming is reputedly dangerous in the area, with strong undertows and ripping currents lurking in very cold water, but we

wet our feet and walked the length of the beach before picnicking in the shade.

This is the magic of Cape Town. Less than an hour away from the city, in all directions, exist many oasis of pure, undiluted beauty, where one can be alone and feel like the real world has disappeared beyond a horizon of a thousand years of tranquility.

There are very few places in the world that carry as much romantic symbolism as the Cape of Good Hope. Standing there and looking out into the ocean is a bit like staring into the future and the past simultaneously.

There is nothing beyond but empty space and while at your back sits the hungriest, hottest and most tortured continent on the planet, the ocean in front seems to be calling for a truce, for a fresh start, offering a level playing field in which all men can measure themselves by the only value worth governing the world: courage. 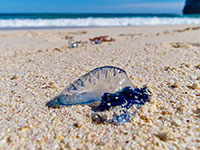