An Intro to Night Diving

When you first jump in, you might as well have suddenly left the known universe behind and stepped into a mysterious black hole. If you’re smart, your light is off; there is no sense attracting the eager attention of surface stingers. But then you have to be good at it, too. Dropping a light that is not on could mean losing it forever.

You are dipped into absolute temporary darkness. Your suit slowly fills up and the water is likely to be chilly. You have to readjust your mask, exhale, and clear your ears repeatedly, trying to leave the surface where jellyfish abound and buoyancy is tricky, as soon as possible. You are disoriented and maybe breathing a bit harder than necessary. But if your ears cooperate, soon you feel yourself sinking. Flashes of light have already irrupted around you from other impatient divers, bright inquisitive beams piercing the night in a frantic, disorganized fashion. At this stage everyone is fiddling with a slipping weight belt, an unzipped wet suit, a flooding mask or a sleepy camera. Lanyard lights are hanging loose on busy wrists and trashing around like mad Hollywood floodlights. It’s time to turn yours on, too.

Instantly, the black hole turns into a very finite world defined by the narrow range of your dive light and bordered by impenetrable nothingness. Nuances vanish, giving way to radical shadows and harsh overexposure. You are below fifteen feet now and buoyancy has been tamed. Tired of exhaling, you relax your breathing and seek inner peace. Tunnel vision subsides and your mind begins to register a surreal environment. The dive has begun. 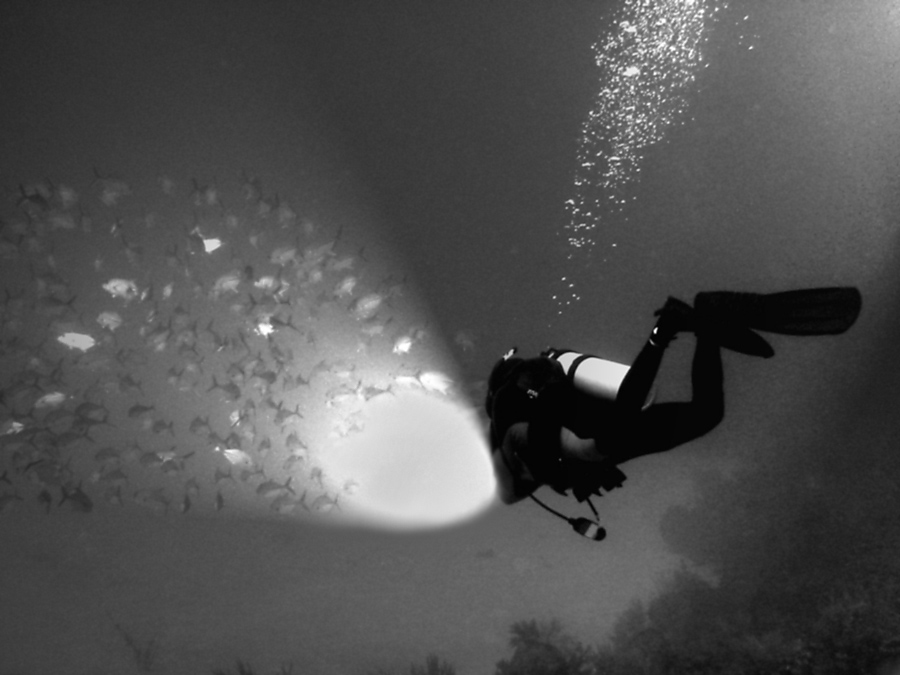 First things first; a glance at the computer confirms bottom time lapsing, depth increasing and a comforting lack of any warnings. No-decompression is forecast to longer than your tank will last according to the pressure gauge and your best guess. It is all looking good. Your buddy, almost forgotten in this surge of raw input, gives a thumbs up, and then remembers it is the wrong hand signal, only used by land creatures and flying ones. So the fingers are closed into a circle. Good to go. You tune in your mind and eyes to a new reality. And if your mouth could gape away from the regulator, it would.

This, all of this, is probably as strange and incredibly new as walking on the moon must have been for Neil. You are weightless—that is nothing unusual, hundreds of daytime dives have announced it. But you are also horizon-free and completely isolated. In the dark, it is all the same. Unless your senses have been honed by countless previous experiences, you just will not know which way is up and which is down. And if watching your rising bubbles provides absolute proof, you might still not believe them. You had better watch your instruments, then. Night diving is the ultimate test of one’s discipline and training. One day, I caught up with an advanced student at one hundred and twenty feet, two minutes after instructing her to remain at forty and run a triangular navigation pattern. The compass had hypnotized her and being blessed with forgiving Eustachian tubes, she had unknowingly sunk like a dying ship over the drop-off.

For now, the reef appears and the buddy system has lost most of its meaning. He or she is there, a vague abstraction hovering somewhere nearby, and yet you feel alone. Alone with your thoughts, your feelings, and a world that irrupts into brilliant colors and frantic marine life as your light glides over it and then fades back into oblivion as the beam moves on.

Your senses are getting sharper. You are adjusting to new wave lengths and a different timescale. Finally, the underwater opera makes sense to you, and after a dramatic opening, the lead singers launch into mesmerizing solos. At times it will be an octopus, haunting the reef in full stealth, changing colors to match its surroundings and mimicking whatever is foreign. Or it might be an eel, muscular and slimy, undulating gracefully between coral heads in search of an easily cornered dinner. It often could be a spiny lobster, clumsy and yet wired, antennas scanning the ocean like a dog’s nose scouts the world around it. It might be a company of baby squid, hovering comically in the water column and easily blinded and fooled into bumping against your hand. It should, at some point, be a sleeping hawksbill turtle or a resting nurse shark, or even a very awake and sleeker reef shark, now you see me now you don’t, in and out of the beam, coming from nowhere and headed back to it, with a soft spot for your ‘six’, which you will end up checking more often than necessary…

But all these are just appetizers, they are previews to the main show, teasers, a warm-up towards the dive’s apotheosis. Because sooner or later, no matter how extraordinary the fauna and how stunning the feeding frenzy of corals, at some point, you just need to turn your light off.

So when the night returns, you are impatient at first, and think that bio-luminescence is highly overrated. Your finger inches towards the light’s switch. But then your eyes catch a glimpse of greenish light, a strange spark in the vast darkness. Then another. And another again. They multiply, like a swarm of fireflies appearing out of nowhere. Simultaneously, as your central vision gets accustomed to the absence of white light, your peripheral awareness begins to discern shadows and silhouettes on the bottom. The reef slowly re-emerges in front of you and a sense of 3D is reborn.

Within a few minutes, your eyes have adjusted to the dark and you are able to move around again. Bio-luminescence is everywhere, flashing, ever-changing, fluid, fascinating. Vertical strings of beads hang in mid-water like candles flickering in the wind, single flashing sparks surround you as if emitted by a camp fire, undulating worms spiral endlessly in all directions, and the more you move the water around you, the more luminescence is triggered. If you are lucky enough to find a sand patch, you and your buddy could spend an eternity kneeling on the bottom, waving your arms madly at each other and causing an explosion of greenish fireworks. “Tinkerbell playing in a candlelit cathedral” is the best description I have come up with. You will come up with your own.

Eventually, the dive lights come back on, resurrecting those amazing reds one rarely sees during the day because of color absorption. You set out in search of a few rarities: a tame snake eel blindly foraging for food; an open basket star, fanned into the current on the drop-off’s edge, actively grabbing the worms that get caught in its web; a Spanish lobster, shy and looking more like a giant bug that a crustacean; and if you have a keen eye, maybe, a seahorse or a frogfish, both elusive and highly camouflaged, both exceptional sightings worth many stories to follow.

Then, too soon, your time is up. The dive computer has cut down drastically on your remaining bottom time, the aluminum tank is getting light, you might be chilly. You try to find a reef patch shallow enough to spend the safety stop there looking around some more, but you might just have to hang on the descent line. Three minutes later, you turn your light off after having glanced nervously at the surface, trying to assess the stinging layer. Some divers blow bubbles up to clear their path, others just chance it. Go slow in the last fifteen feet, it is still a dangerous zone. Surface. Inflate your buoyancy compensator. Signal “OK” to the boat crew. Get out of the water fast.

And then tongues get loose and the stories begin, probably lasting long after the boat has docked back at the dive shop, possibly far into the night. “You guys know what I saw???”