An owl on Burrard Street

News travel fast in a 5×5 km downtown core with a population of 100,000+. I got the first email in the morning. There was a baby owl 5 blocks down at the corner of Burrard and Hastings. Easy to find, been there for a while, a cutey.

It wasn’t until after work that I got a chance to investigate, and I first had to run home and grab my camera bag. I was back on location around 5:45 pm, 999 W. Hastings, esplanade of AXA Place. I thought I wouldn’t be that lucky. I was wrong.

The owl was right there, at eye level in a small 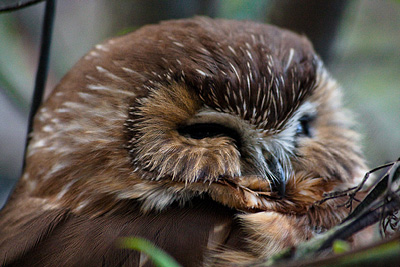 tree rising from the sidewalk below, right in front of the building’s entrance. A few people were still exiting the building on their way home and most stopped by to see the bird, respectfully staying a few feet away and snapping blurry pictures on cell phones. The word had indeed traveled.

Everyone – including me – thought the poor owl was a baby. Roughly the size of my hand, it sat on a branch and seemed sleepy and bored. It half-opened its eyes once in a while to check me out and went back to sleep. It was, most definitely, adorable.

I shot 69 images, freezing my hands a bit (it’s still winter here, even though buds are finally appearing on the cherry trees) and went home. On the phone later, Marie rightfully pushed me to call someone knowledgeable to see if they thought the bird needed help, which I did. I called O.W.L. in Delta at 7:00 pm and to my surprise, someone answered, friendly and interested. I was explained that my owl probably wasn’t a juvenile but a full-size adult and was offered a couple of specie options, the Pygmy or also very small Saw-whet Owl.

Very cool. It would seem it’s migration time and the beautiful bird was just resting and hiding from the crows, and will be gone by tomorrow. I will check.