Heading north has always been the path to mystery, to silent

eerie forests and shadow-filled canyons, to myths and legends beyond comprehension and to the cold bite of unforgiving winds or the penetrating humidity of endless fogs. As much as the South echoes in my mind of warm seas and aimless pursuits, the North is made of exploration and danger, and magic, and sorcery.

So when I headed across the Burrard Inlet last week-end in my quest for a few stamps, it was with the firm intention of balancing my time in touristland with time in the other world; the secret, often ignored and always quiet space that lies just at the edge of civilization, right next to our daily madness arena and yet so remote in the collective consciousness that it might as well not exist. It always puzzles me how easy it is to step from crowded paths into peaceful and haunting side tracks. They are there, all around us, all the time. One only needs the will to see them. 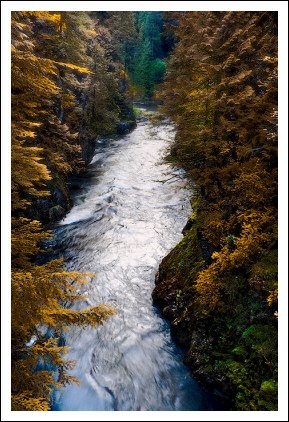 Suspension Bridge was its usual self, popular, wobbly, long, overlooking its canyon from hundreds of feet up. I crossed it, got my stamp, came back, and walked up Capilano Rd for a few hundred meters to the branching left turn. Because I, was going down. Soon, I left the already quieter paved road and ventured onto a narrow hiking trail. I was alone, at last. It had been 29°C when I left the West End around 4:00 pm, this being the warmest day of the year so far. But as I pushed deeper into the forest and closer to the bottom of the gorge, and the roaring of water, the air chilled and I knew magic had begun. Sorcery too, maybe, but would I ever know?

The sun was about to dip behind the mountains to the east and had serious trouble reaching as deep down as the river. Shadows grew around me as I descended swiftly, taking deep breaths and smelling with great pleasure the pine trees and their moss. It wasn’t difficult, then, imagining a world of Elves and Goblins and Trolls, alive around me, watchful and whispering as I passed by. The city had moved back into my mind to the state of a theory, an abstraction merely remembered but not entirely possible. It might as well have been a thousand miles away.

Surprisingly, when I finally made out the white foam of rushing rapids below me, some light seemed to reappear. The river caused a relative clearing in the tall trees and a few late rays shone bravely enough to bring some gold back to the overwhelming green of the foliage and moss and water. I took a few pictures and walked upstream, 50 feet or so above the rapids on the steep eastern bank. Eventually, I reached a small wooden bridge over the Capilano river, which I didn’t cross. I knew exactly where I was, the salmon hatchery was up ahead to the right. Having found it, I took a last long look and walked back up slowly, leaving magic behind and re-acclimating myself to noise and people.

Back on Capilano Rd, I lazily hopped on the bus and kept going uphill to the bottom of

the Skyride. Grouse would yield another stamp. While waiting for the next red cable car, I paid the poor wolves a visit and promised one to put his picture on my blog to cheer him up. I wasn’t sure, but having just come from the enchanted forest below, I thought he might have been an old king, caught off guard by some evil witch and held captive by a terrible spell, to his slow agony and our ignorant pleasure.

Then it was time to rise. The ground faded under my feet and the horizon grew wider and brighter. The sun was setting at precisely the moment we passed the second pylon and when we finally entered the summit station, it had disappeared behind the Lion

s. I walked around, aroused by so much fresh air, revived by the proximity of the mountains and mesmerized as always by the beauty of the scenery.

But I had a rendez-vous to attend and I sat down with a tall murky beer at the Altitudes Bistro, silent, lost in thoughts and ever so grateful. It was my first time back up since coming with Marie the previous fall. So much had been set in motion, then… I took a deep breath. Magic, it seemed, did not only live in mysterious woods. It had followed us up here, that night, and always would stay. I sensed it all around. It was talking to me. I answered and smiled, looking to the East. Then I finished my beer and headed back down. Magic followed. Or maybe it lead. I know where it’s going.