The first round was quite a success. The pictures by French astrophotographer Thierry Legault of the space shuttle Atlantis transiting in front of the sun on its orbit to rendez-vous with Hubble are now all over the internet.

Inspired by such beauty and motivated by his talent, I decided to attempt my own experiment with the shuttle’s sun transit. My gear is nowhere close to his, but I figured that ingeniousness and creativity would compensate.

With transit times shorter than a second, the smallest mistake in setting up the shot can mean disaster. The camera must be able to shoot at its maximum speed, there’s no time to look through the viewfinder and the lens must imperatively be protected by the strongest filter. And the main problem for me was coming up with positioning calculations that would allow for a decent chance of success.

I must admit I didn’t get quite the expected results and completely missed the shuttle. However, I guess I was blessed with beginner’s luck because I managed to catch another object orbiting the Earth!

Below is the original shot from Mr. Legault, for comparison, with the shuttle as a dark spot just below the 3 o’clock position. I aimed exactly as he did. Click on the image to view a cropping of my own image taken yesterday – not sure what went wrong, it should’ve caught the shuttle.

And for the real deal, make sure to visit Legault’s web site. 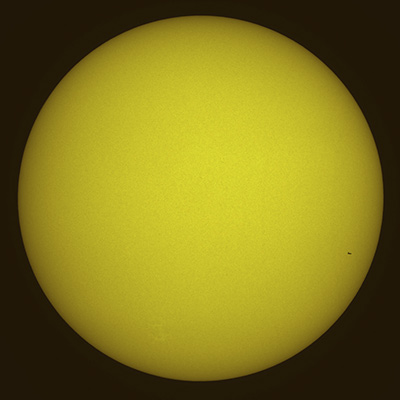