Avatar: I Don’t See You.

Right out of an IMAX theater, my rather bleek review of the blockbuster.
Reviews, Sans armes, ni haine, ni violence

Ok, now that I have your attention, let me explain what I really have on my mind. It’s 9:00 PM. We walked out of the theater around 5:30 PM. I am still sulking. I feel sad and extremely disappointed, and sour. Because you see, 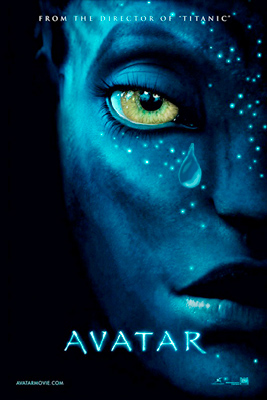 for me, Avatar totally sucked.

I had been basking in a deep trance of the finest expectation for over two months, thinking about the upcoming 3D IMAX blockbuster constantly, counting down, cherishing each moment gone between me and D-day. I don’t believe a child awaits Christmas with more enthusiasm, more passion than I did my movie.

Avatar, I assumed, was going to be it. The Movie of the Decade. The Star Wars of a new generation. The one masterpiece that transcended its time and took cinematography and special effects to a new level. The benchmark for many years to come. As my sister had described it referring to Fynn’s Anna and Mister God, “an Ah! movie”.

Waking up this morning, I barely could contain my excitement. Walking into the theater, I hardly managed to breathe. The CGI was going to be out of this world. The 3D was going to be so immersive it would suck us into the screen. I fully expected Avatar to blow my mind. Instead, it blew it away.

We got to the AMC Loews Lincoln Square theater only 15 minutes before showtime, 15 minutes late on my planned schedule thanks to NYC’s painfully slow subway system and the resulting 6 or 7 block walk. I had already screwed up. I should have known better. When you want something really bad, you must bleed for it. I should have decided on an hour early arrival just to be sure.

By the time we entered the gigantic IMAX amphitheater, it was already 80 or 90% full. There simply were no good seats left. Having been on the guest list at the Vancouver Canada Place IMAX for 3 years, I am very familiar with the setup and know all too well that the only good seats in the house are up high at the back, center. Period. I was lucky enough to once be given a tour of the projection room by the Vancouver projectionist himself, and that for sure had blown my mind. What I hadn’t realized then is that unless you are seated in the 25% prime seating, IMAX is nothing but a hoax.

Our New York tickets cost $18.50 each and by the time they were bought online, we were short US$41.50 for two people, no popcorn. And these days, that’s rough on the budget. So walking in 15 minutes before lights out got us a seat rather centered but about 3 rows from the bottom. The bottom. Right then and there, I screwed up again. I should have made an executive decision and bailed us out of there.

We stayed. The screen could not have been further away from our faces than the opposite end of a subway car. That screen, however, was 4 or 5 stories high. Across the entire theater, morons were wasting seats by leaving a space between themselves and the next person, effectively killing space for couples and making it just about impossible for late-comers to fit themselves in. The theater probably seats over 400 people, and it was, as far as I could tell, sold out.

The movie started. Given our low seating, I had made a solemn promise to myself not to break my neck trying to follow the action on screen by twisting said neck. Instead, I would fling my eyes sideways. We put our plastic glasses on. Instantly, starships flew across space, planets revolved one around another, a bunch of sleepy guys awoke from cryogenic sleep in complete weightlessness, and rather than lifting me up, they drowned me into my seat.

This was not the 3D IMAX I remembered. As long as the scene was a panoramic, distant view, things were acceptable. But as soon as the action got closer, you lost track. Close-ups were simple abstract moments of jagged perspective. I could not grasp the entire picture without ordering my brain to switch off some sensors. It was either the guy in the foreground or the blurry background; there was no in-between. We were just basically too bloody close to the screen.

Within 20 minutes, Marie, who is rather sensitive to heights and motion, was feeling sick. I spent the rest of the movie worrying about her. This must not have helped.

Through a childish scenario and a transparent plot, James Cameron then threw some seemingly stunning CGI at us, except I couldn’t really enjoy it, as it was literally in my face. Later, he branched into First Person Shooter-style video games. The aerial chase scenes and never-ending explosions made it impossible to distinguish between a PSP console, a colorful nightmare, some cheap Vin Diesel / John Woo action movie where everything blows up, and the movie Avatar.

There were puerile allusions to the Middle East, the good guy was a Marine fighting other Marines, Sigourney Weaver was back in space dealing with Aliens, islands lost track of their gravitational duties, plants glowed happily in the dark and a close-up of the two computer-animated Na’vi kissing was just as real as Jack Dawson kissing Rose DeWitt Bukater on the Titanic. It was all too much to handle while attempting to control three-dimensional explosions.

End credits. We walked out within the human flow, dropped our 3D glasses in the ritual bin, and I looked for a bathroom, which I found 4 floors down thanks to a complete absence of signage. The queue was longer on the men’s side, something I have never seen anywhere. There were 2 stalls for an entire floor of multiple theaters. What the hell is AMC thinking? That once the tickets are sold, customers can hold it?

So what’s the bottom line? I’m a kid, and I was robbed of my Christmas. All that anticipation only led to a tease and no sugar, no toys. It feels like maybe, probably, from another vantage point, some utter magic might have been happening on the giant silver screen, but it wasn’t mine to taste. Sure, I could go see the damn movie again. It would mean having made an overall hefty donation of $60 to James Cameron, IMAX and AMC, which I’m sure neither really needs. It would imply getting the right seat at the top of the room, and thus arriving at least an hour early at the theater and waiting patiently in line. And still it would be a show without surprises, without wonders. It would be a redemption viewing, a last chance at convincing myself that indeed, the movie was worth the 300+ million dollars it cost.

It think that IMAX needs to rethink its seating configuration – hell, its entire theater design. Charging almost $20 for a movie that less than 50% of the audience can fully appreciate is theft, an incredible ripoff that nobody so far, to my knowledge, seems to have denounced.

Avatar was going to be great. It was going to reconcile me with art as a way of life, as an expression of our infinite creative potential, as a proof that some people walk this earth with their eyes turned skyward, where everything is possible. That reconciliation would have been much needed, my personal dealings with the concept of art having been rather morose recently.

Instead, I am left with nothing to dream about, no endless after-dinner conversations about the how’s and why’s, no admiring praise of the vision and technique, no inspiration nor renewed belief in our race’s clever use of technology for the amusement of the masses – and worse, no raving review of the movie on this very blog that would catapult my traffic into three-dimensional dimensions…

I am left wondering if I’ll ever chance an IMAX movie again. I am left pondering if others actually saw everything they raved about or if all the hype was simply a clever media manipulation and the result of mass-hysteria and sheep-like behavior. Yet Marie liked it despite feeling dizzy, and so did my sister. How did I miss the show, then?

I glance at the calendar and wonder if I will manage to wait another decade for the next Avatar. Who knows. Chat échaudé craint l’eau froide.

P.S.  Yes, for you keen eyes out there, the added tear on the poster is my own CGI. And it cost nothing to produce. Ok, so if Cameron drops me a line with a job offer, I’ll withdraw all the above…