Avatar revisited: Part 2 – A look behind the scenes

James Cameron is no ordinary man. He began his career as a trucker, studying cinematography on the side. Yet he holds the current record for the highest grossing movie ever, Titanic, and 3 weeks after the premiere, I believe Avatar 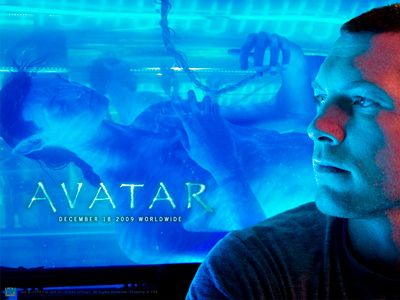 has already reached the second spot for worldwide sales. The thing is, Cameron likes taking risks. And he had been dreaming about making Avatar for the last 15 years.

His latest movie breaks so many rules and innovates in so many fields that a review of it becomes like a complicated charade. There’s too much to say, too little time. And no technical explanation, no lengthy description of the planet Pandora can ever replace actually watching the movie. This is a typical case of “You have to see it to believe it.”

But I will try. Cameron first conceived and pitched his idea in 1995; back then, it got rejected based on the time’s cinematographic capabilities. What he wanted just couldn’t be done. So he filed it away and instead worked on Titanic and a few other movies while he perfected the technologies he would eventually use for Avatar.

Time passed and in 2002 and 2003 the character of Gollum appeared in The Lord of the Rings, animated by Peter Jackson’s company Weta Digital, via the motion-capture of an actor’s performance. The result was impressive enough to signal Cameron the time had come. As was the case with the animated character of Davy Jones in Pirates of the Caribbean, the scenes were still brief and technique needed to be improved but they were the cue to bring the Avatar project back to life.

The first thing Cameron did was follow in Tolkien’s footsteps and define an incredibly detailed reference for his story. Just like JRR had crafted the Middle Earth in its most intimate details, Jim created the planet Pandora with details in mind, knowing that those would make the difference and give life to the CGI (Computer Generated Imagery) to follow. He surrounded himself with experts who each pushed the envelope in their own field. A indigenous language was invented down to the grammar for the Na’vi to speak; their music was structured; the planet’s animal kingdom and lush bio-luminescent vegetation were labeled and described in scientific detail; its atmospheric density was computed. The Pandorapedia (video) was born. Cameron was having very thorough fun. He brought Peter Jackson and Weta Digital on board for the digital animation, later supported by Lucasfilm’s ILM.

Next, Cameron concocted a cocktail of three radically new or highly improved ingredients for the making of the movie itself. The first was the revolutionary Stereoscopic Fusion 3D camera, which allowed for high definition 3D digital filming with a camera that was much more manageable than the old bulky 15/70 IMAX camera (like the one David Breashears had to log almost to the top of Everest while filming IMAX: Everest during the infamous 1996 season that cost so 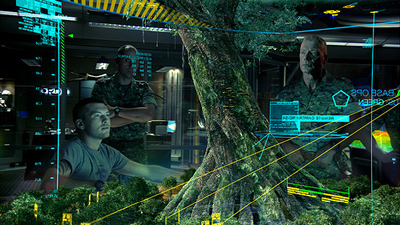 many lives and was made famous by Jon Krakauer’s Into Thin Air.)

The second ingredient was a new facial or performance capture of the actors’ faces while they played in an empty space called the volume in order to construct a “rig”, a digital framework of their faces that would then be applied to their CGI counterparts via a set of rules controlling muscle movement. To achieve this, the actors wore a tiny HD camera on their forehead while acting in the volume where they were recorded globally by multiple cameras in a 360° environment. Each of the avatars and Na’vi people were actually animated based on the direct performance of an actor, recorded by the combination of a facial camera and multiple reference cameras moving around them in the volume.

“I wanted to be able to look the actors in the eye and say What you do right now, on the set, is what it will be. It will just be blue and 10 feet tall.”

James Cameron in an interview to Popular Mechanics (video)

Which brings us to the third, two-part ingredient. Cameron wanted to be able to visualize what he was filming, or creating, in real time. In the past, all elements would have come together at the post-production stage: a complicated mix of real acting, green screens, computer generated environments and the highly sophisticated CGI avatars. But Cameron had a tool designed that he called the virtual or swing camera, simply consisting of a lens-less frame with markers and an LCD screen. He could use the virtual camera to move about the volume and look at an actor as if holding a classic camera and would actually see the avatar instead on the LCD. Later, this evolved into the simulcam which integrated performance-capture, live acting, and CGI characters and scenery so that he could actually see what he was filming rendered the way it was meant to be seen, in real time.

That explosive cocktail took years to fine-tune. Eventually, though, things were so well set that Cameron and his team could finally achieve what had once been impossible; they were now able to combine CGI and real 3D cinematic footage into perfectly seamless scenes with incredible detail and astonishing quality, keeping absolute control over the timeline and without being locked into using pre-recorded conventional cinematic imagery to host the CGI. James Cameron held the keys to a Pandora’s box of unimaginable power.

Better, he could now create his very own Pandora and doing so, he would forever blur the line between illusion and reality.

The New Yorker
Man of Extremes – The Return of James Cameron