Avatar revisited: Part 3 – Ok, I see why they saw you.

At some point during Avatar, when Jake first meets Neytiri after she’s saved his butt by reluctantly killing the wolves, she throws his torch in the water, annoyed by the light. As their – and our – eyes adjust to the obscurity, 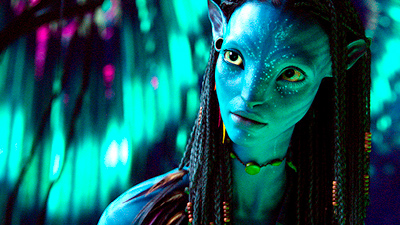 incredible bioluminescence awakes all around them, revealing for the first time that indeed, everything that lives on Pandora glows beautifully in the dark.

At that point, the tough guy sitting next to me and who was also on his second viewing just sighted lengthily and seemed to levitate slightly in his chair. I knew exactly how he felt. There is such incredible beauty on Pandora that it’s impossible to remain stone-cold. Cameron has obviously tapped into his knowledge of deep ocean diving and his passion for the sea to create life on the alien planet. Some smaller creatures behave like underwater species and many of the plants become at night very much coral-like.

The artificial biodiversity created entirely by CGI is simply breathtaking. And when a human comes along and interacts with the planet’s fauna and flora, it is done so impeccably seamlessly that there is no way to distinguish between animation and real footage. Humans, Na’vi, avatars, the jungle and man-made structures and crafts all appear to be of identical origin. As I said in the previous post, the line between reality and fiction has been visually blurred forever.

The artificial biodiversity created entirely by CGI is simply breathtaking

When the movie ended, I glanced behind me and saw that 5 people were still there, leaning against the wall, 3D glasses on and staring in fascination at the rolling end credits. They must have failed to find a seat in the darkness and remained standing at the back for 2:30 hours…

That in itself, I would say, summarizes Avatar pretty well. Magic worth standing up for.

I’ve now seen the movie twice. Some might recall that my first viewing was a rather big disappointment. Marie and I sat too close to the 8-story tall IMAX screen and the 3D was difficult to grasp, that effort casting a deadly shadow on the other Avatar marvel, computer graphics, which I didn’t really have a chance to appreciate.

This time however, seated all the way at the top, I was in the perfect spot. Here is, thus, my final rating of the movie on various scales from 0 to 10:

I hereby confess joining the masses: Avatar is simply the most extraordinary movie I’ve seen in a long, long, long time – possibly ever. There is genius sprinkled all over the film. My sister was right, it is a Ah! movie. I think it has forever altered the definition of special effects and opened a door onto a new era in movie making. The only true stunning innovation I can imagine after Avatar would have to be the coming of realistic holographic cinema.

Granted, the flick is not absolutely perfect. First of all, the production cost figures as well as current and expected box office revenue are just too unbelievably high to be healthy. One could fall into an abyssal depression just trying to calculate how many Third World children could be fed with that money. As far as the movie goes, there are too many fast-moving, hard-to-follow battle scenes, as is sadly the trend in modern action movies. Also the plot is simple at best, cheesy at times. But in the end no one really goes to see Avatar for the story. It’s what it does to our imagination that makes the movie what it is.

Watching Cameron’s Avatar, I caught my emotions stirring up without my consent. I wanted to cheer, I wanted to clap, I wanted to laugh, and even maybe cry a little. Not out of sadness ’cause Sigourney hadn’t made it, boo hoo, or because so many Na’vi had bought it fighting for freedom, reboo hoo, but rather out of plain gratitude! Because while our daily lives are bombarded with so much ugliness, someone, somewhere, had taken the time to imagine and design such pure, undiluted beauty. Because that someone didn’t have to do so; a horror movie would have been easier to make and sold almost as many seats. And because he did it any way, out of passion, stubbornness, unyielding willpower and audacity.

And that fact, even more than anything else, will be the gift I take away from watching Avatar. As long as we, as a bunch of self-destructive humanoids, are able to technologically create and truly appreciate such beautiful stuff just for the sake of it, I can live with who we are.