Coming back to North America after having spent time in Africa is always a shock to the system. But with New York being the landing place, it becomes no less than an AED (Automated External Defibrillator) jolt. The message is clear; time to wake up, to speed up, to come back to life, to stress, even, to jump back in the saddle, to join a frantic rush to nowhere.

Granted, Cape Town is probably one of the most civilized cities on the African continent. It intimately reminds me of Vancouver, nested as she is between ocean and mountain, tucked away in a temperate micro-climate, its weather moods as changing as a baby’s, beauty everywhere. So my above comparison would probably be much stronger if coming back from the real, troubled, steaming, central Africa. 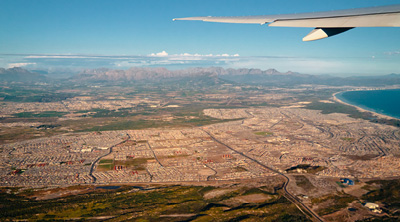 Taking off from Cape Town, Khayelitsha under the left wing

Still. After a melancholic departure from Constantia, the Emirates flight back to Dubai was good, if maybe a little bumpy for Marie’s taste as we flew through stormy equatorial skies. A quick layover in the UAE and we were airborne again, aboard an almost empty Airbus A380 that flew a smooth great circle route over Turkey, Europe and near Greenland, before descending into Canada and approaching NYC from the north.

We landed at JFK with some twenty-four hours of flight time in our legs and were greeted by a friendly U.S. Customs and Border Protection agent who warmly recommended Puerto Rican cuisine. Then we queued up for a cab and, zombified by the long trip and a surreal homecoming after just leaving the other home behind, we dutifully loaded our luggage in the taxi’s trunk – all but Marie’s laptop bag which, we think, just sat there in the trolley for all to grab. 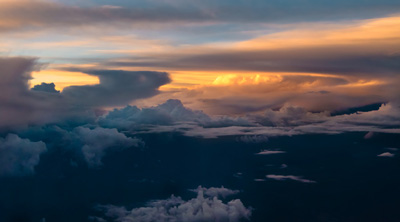 Many back and forth trips and a day later, we recovered the precious bag which, it turns out, had been handed over to airport police, along with the two passports it contained and a substantial amount of cash! Yes, the cash too. Alleluia for honest folks.

We have now reclaimed our sorely missed big bad black cat, bid his cat-sitter farewell on her own journey back to Australia, shopped for groceries at our favorite neighborhood joints while wishing aloud we were at a South African Woolworths, dug out the Bialetti stove-top espresso maker, checked out the city skyline from our Brooklyn Promenade, voluptuously laid our claim to real broadband internet speed, notified all parties that we had arrived safely and fully, began getting reacquainted with ambulance sirens, impatient hoots and other signs of urban decay, and suddenly, the AED jolt leaves me gasping for air.

Brooklyn’s streets are dirtier than I have ever seen them, a sad consequence of six weeks of heavy snow cover and the quasi-impossibility to clean up. There is so much garbage on sidewalks it looks as though someone has been emptying garbage bins around for fun. New Yorkers must have had quite a rough winter while we were in the Southern Hemisphere! 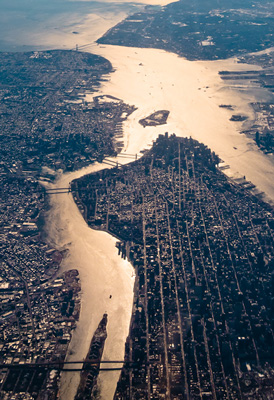 On approach to JFK, overflying Manhattan

Other than that, after a windy night, the sun is shining but temperatures remain chilly. We are looking for a park to go visit, a place where birds would linger through the winter, reminding us of Stanford’s incredible lagoon – oh, but I haven’t introduced the lagoon yet! You see we spent a few magical days at the country house of Cape Town friends in Stanford, a village near Hermanus. A river flows nearby and spreads into a huge marshy estuary that reaches the house’s lawn, making for stunning kayak rides through an amazing diversity of water birds.

Stay tuned for pictures of huge flamingo flocks, blue cranes, herons, fish eagles and perfect sunsets. As a bonus, if you order in the next ten minutes, I’ll throw in an extra post about our visit, at last, to the real southermost point on the African Continent, Cape Agulhas.