There are times and places when – and where – one wishes the former would stop and the latter could be taken home. But time surely never stops and those places only follow us home on frozen photographs and wrapped up softly in our memories. It’s up to us, then, to match our pace to that of life around us and 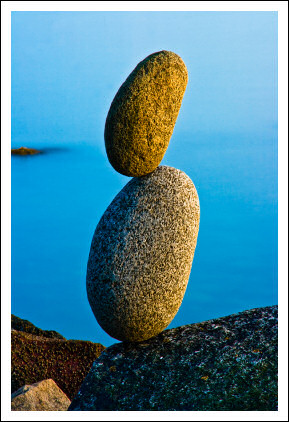 to make sure the memories live on and generate new dreams.

I had noticed on my afternoon run that Kent Avery, the singular man behind the famous balanced stones, was at work on his regular spot half-way between Ferguson Point and Second Beach, and I’d decided to come back for sunset.

When I arrived, the sun was just dipping lazily behind the gentle mountains across English Bay, leaving us with nothing but a cloudless sky and a palette of colors that were still too dull to exploit. I would have to be patient.

As I was slowly setting Abe up on the tripod, a man rushed past me, headed towards the city, and said: "If you hurry up and turn around, there’s barely enough light left to get a shot of this." He was pointing at the moon. I smiled to myself and muttered: "Dude, you have no idea how wrong you are. The light hasn’t even appeared yet."

Kent was still around, balancing two last stones near the water’s edge. Eventually, seemingly satisfied with his work for the day, he came over and started talking with passers-by. After glancing at my camera, he asked in a melancholic tone: "Did you ever use Kodachrome?" It said nothing but said it all. I replied that I had been more of a Fujichrome fan and

the conversation picked up. We talked about good old times vs the new, about the Photoshop lab we now have at home and about the ever-lasting need to still get it right from the start, in-camera. He mentioned he was working on a book of photos of his art and stories he’d accumulated during nine years of "being around".

People were walking past us, commenting out loud, in admiration. "They look like little people" said someone. "I can’t understand how come they don’t fall down right away" added another. "This is so peaceful" said a small girl that could not have been older than 10 or 12. True, there was a peculiar stillness in the air and the balanced stones seemed suspended in space, defying gravity and our very understanding, as if painted unto the scenery and as such, immortal. They would, however, be short-lived. Tides and the wind have been making sure to keep Kent coming back week after week, and he does.

I was in no hurry to shoot anything, and neither was he. I knew that the magic was

probably going to happen after most people had given up and gone home. There are, really, two golden hours. One is the painters’ favourite, late afternoon, when a low sun washes over a scene in warm orange tones and long shadows. The other is the photographer’s, or maybe just mine. The sun has already disappeared below the world, light is evening itself out, shadows give way to richer midtones, and if one is lucky, the sky puts up its most amazing display of colors as the sun’s rays are still reaching far up into the atmosphere. It’ll happen anywhere between a few minutes a

fter sunset and a good hour later. As a rule of thumb, when people are getting chilly and leaving and I wonder what to do, I stay. It usually pays off.

As time passed, the Seawall was emptying itself of its human fleas. Darkness was gaining on a long day. People were fewer and fewer. At last, the light changed. Subtle nuances emerged in the sky and calm water by the shore began flirting with them. Abe came to life on her pedestal.

It was getting late. Kent had finished taking 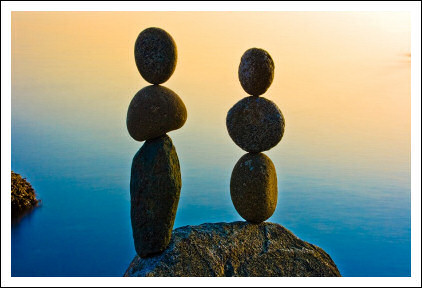 shots of his open air temple on a small digital point-and-shoot and took leave. "Come by and show me your pictures some day, he said." I was about to ask him where his office was when I remembered I was standing in it. "Sure, I replied, ‘be glad to." Even he might be a little surprised by the results. It’s hard to believe that in the almost complete darkness which reigns an hour after sunset, so much light still exists for the sensor to record.

At such long exposure settings, the game is one of patience, of trial and error. Reciprocity failure kicks in and makes any precise calculations pretty much impossible. But nothing about Sunday night’s conditions was precise. It was the romantic hour, a time for fantasies and visions and dreams, for drifting thoughts and longing unleashed. I had to see the colors with my inner eye, the real ones having gone almost blind as Abe, even in manual focus and with my guidance, struggled to find her crisp edge.

And there, unavoidably, as the shots were stacking up unto the memory card and a silent night had fallen on the Seawall, I found myself connecting, to other places and different times, to memories and paths and directions, to the absent one who ought to have been standing there next to me, and soon would be, somehow, somewhere.