After yet another violent windstorm followed by a heavy snowfall, the inflated roof of BC Place Stadium seemed to collapse today in front of the amazed eyes of thousands of Vancouverites. The stadium administration eventually issued a statement in which it stated that a tear in the west panel of the roof had forced a controlled deflation. It is assumed that wind strength and wet snow weight were the cause of the incident. It’s the first time in its history that the roof was lowered for such reasons. A new panel is being shipped to repair the tear.

A 60,000 seats facility, BC Place features the largest air-supported, non-retractable roof in North America. The dome is made of two layers of a Teflon-coated fiberglass fabric only 0.85 mm thick but stronger than steel, the same material used for the sails at Canada Place. Sixteen fans are maintaining the pressure inside the stadium slightly superior to atmospheric pressure thus keeping the roof up. Air locks are used as entry points into the stadium. The design allows for the deflated fabric to cave in but never touch the seats.

On a final note, BC Place will be hosting the opening and closing ceremonies of the 2010 Winter Olympic Games, time at which the stadium’s roof will have reached the end of its lifespan. What if the weather keeps deteriorating until then? Maybe we’ll host the ceremonies at Science World. ;-) 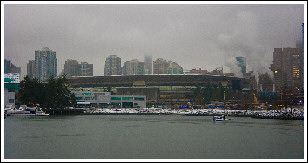