Emboldened by my first snowy owl quest, I set out a couple of weeks ago on a southward drive to distant Jersey beaches, yet again following the ebb and flow of crowdsourced reports. It was a wee hour, spur of the moment decision in the middle of a bad weekend night. After a restless stack of bad dreams and worse wakefulness, endlessly tossing and turning in fear of the world’s darkness like the Hobbits at Tom Bombadil’s, I figured I could make better use of precious time. If I could not sleep, then I would drive.

I made strong coffee and carefully filled a flask, timing my departure to arrive on site seventy minutes later, just before sunrise. It was a strange drive through semi-rural Jersey’s absolute obscurity, on a fast highway where the generous speed limit and blinding opposite lights kept me on high alert for wandering deer.

Upon crossing a multi-lane bridge, I noticed a huge wheeled machine straddling the center, actually moving those cement separators that are often used to prevent opposite lane incursions, by lifting them and sliding them sideways. I had always thought these had to be laid down at great effort and abandoned, and there I was watching them picked up and shoved aside from one end of the bridge to the other, thousands of five or six foot sections in total, in real time, an operation that was effectively removing a lane from the previous night’s drive home to add it to the opposite morning rush to work. I will never again say anything funny about Jersey.

The beach I was going to lies within a State Park and arriving at the gate—which was already manned—before dawn, I was told the park would open at sunrise. It was six forty-five and my phone had plotted an exact sunrise time of 7:19 AM. “When will that be,” I asked the ranger to be sure, “seven thirty?” He shrugged and responded, gauging me: “Well, it’s more when…” He leaned out of his booth looking sideways at the sky and winked. “…When I can see anything up there, I’ll open it up.” That is as good an approximation of civil twilight as I have ever heard. 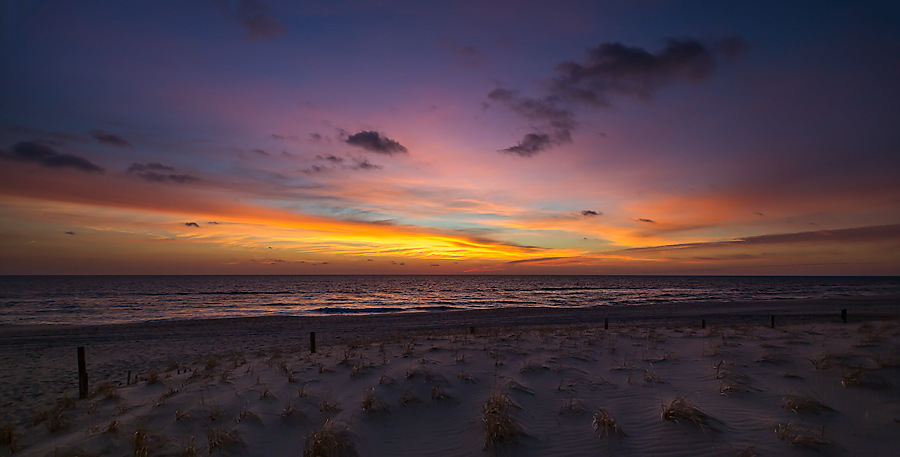 Sunrise on the Jersey shores

I drove around the deserted beachfront neighborhood where tall mansions looking like haunted houses stood squarely under a myriad of roof nooks and crannies, most of them probably deserted for the rest of winter, and was back at the gate as soon as “something” could be seen in the sky. Having paid my ten dollar admission fee, I headed towards the very tip of a thin barrier island similar to the one I had found the first owl on, up north.

I checked out a few spots unsuccessfully, parking at designated areas and cutting through the dunes to the ocean. Eventually, a man in a SUV stopped next to me and leaned over, nodding at the camera hanging from my shoulder. “My girlfriend said that there is a bird all the way down, far, at least a mile from the end of the road,” he informed me in a conspirator’s tone. I thanked him profusely, smiling at the code word use, as though calling the owl a bird could protect it from neophyte attention.

Well there was indeed an owl there but having trudged my mile in the sand, I missed it by probably no more than a few minutes. Folks on the beach told me the bird had just flown into the dunes, which were off limits. So be it. The beach was vast and the day beautiful. I took a deep breath, stretched, and decided to walk to the tip then head back home. The Jersey owl had eluded me.

Then last weekend, struggling with cabin fever, I made a new bet and set out northward again, still trusting publicly reported sightings, to a different beach about an hour from home.

Having arrived after an easy drive and gotten my bearings, I instinctively walked straight to the southern tip of the island, as I had done each time. A couple of photographers camped there explained owl number one had not shown up yet. Passers-by mentioned owl number two a couple of miles to the north. We looked at each other and pondered our chances.

It was an absolutely gorgeous afternoon, not a whisper of wind to disrupt a glassy and glittering sea. Freighters lined up neatly on the horizon, seabirds all around artistically negotiated their amphibious ballet and seals occasionally poked a cautious head through the fluid mirror between our worlds, looked around, and disappeared again. The world was at peace. 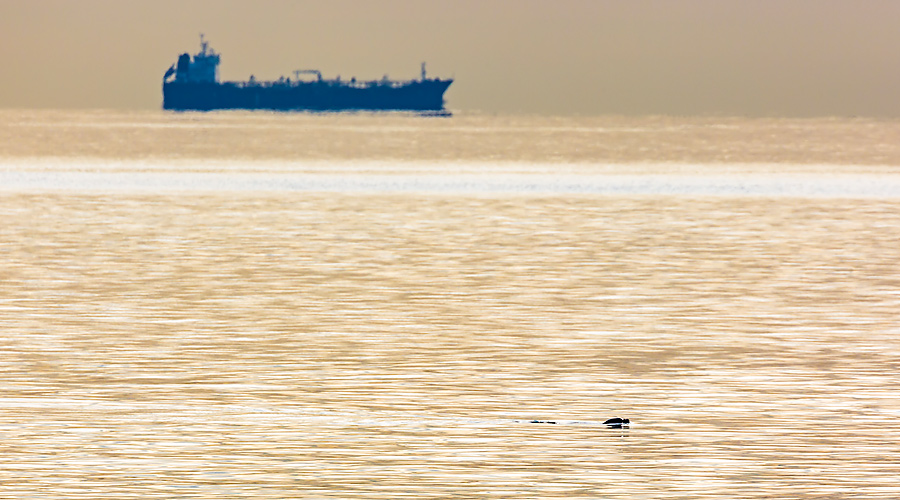 I headed back up the beach, very much enjoying the soothing light which reminded me of Vancouver. When the time came to cut in to the car, some eight kilometers into my stroll, I spotted a group of seemingly huddled people, so far away they were blurred by ground heat—a curious concept in winter, but visible even over water as the photos below demonstrate. Curious, I trained my lens on them, guessing a movie shoot was in progress.

As I approached, however, I realized the focus of much attention was located away from the group. Not a shoot, then. I knew I had found my bird. Or rather, they had found it for me.

Closing the gap, I watched the eight or nine observers who had been grouped together slowly spread out in a rough circle, aiming various devices—cameras, binoculars and even phones—at a white spec of feathers in the center. Irresistibly attracted to the subject, like moths to a light, everyone still managed to keep a very respectful distance. The most hardcore were wearing camo coats and backpacks. I looked down at my bright international orange North Face jacket and frowned. Unwilling to be the tourist finally scaring an otherwise tranquil-looking snowy owl, I stopped on the periphery, took off my jacket, spun it inside out revealing its black inner lining, and put it back on. Very proud of my new stealth, I crept closer.

As it turned out the bird was rather lethargic, as though saving heat in the bitter cold. I think I was on location, getting colder and colder because I could no longer zip my jacket up efficiently nor put the hood on, for maybe an hour. The bird never moved much. It appears we had found a safe distance that kept all parties content, a balance in the Force. The popular owl would swivel its head once in a while, looking at the circus around him, but never even fully opened his eyes, nor did it salute.

Finally, getting a little bored and hypothermic, I retreated. Halfway into the dunes a women coming towards me asked if I had seen anything cool. “There is a snowy owl up the beach” I said pointing. She exploded with excitement. “Really? I have been looking for him for days,” she exclaimed, “where is he?” I steered her in the right direction and she started trotting through the deep sand, thrilled and waving.

I guess snowy owls are a bit like kitties. Fluffy, cute, supremely confident. No wonder everyone loves them.