Ben the Lab Sails to the Undying Lands

He greeted me when I first stepped foot in Constantia, arriving from the Cape Town airport, still jet-lagged but already conquered. He accompanied Marie and I on our very first hike into Table Mountain, freely trotting around as I learned to negotiate the double corgi leash.

He was there on a memorable January day, when rings were exchanged in a luxuriant garden and two lives happily and forever entwined.

He was there for breakfasts, hoping along with the corgis for a croissant bite and maybe a touch of jam. He was there for lunches under the plane tree, unfluttered by the pop of Champagne corks and waiting patiently for his turn to run to the gate and bark at passing dogs. He was there for every wonderful meal ever had on the terrace at night, as the owls called and the wind blew softly in the poplars. 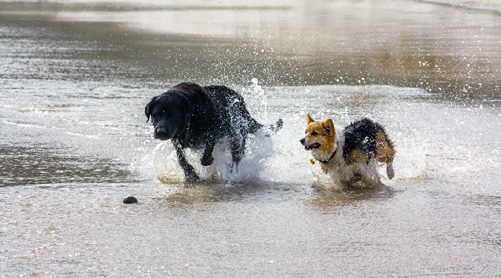 He used to come to the beach and run all he could chasing a yellow tennis ball with his two sidekicks. Then he grew tired. Grey hair appeared on his jaw like a wisdom beard.

His walks shortened, he kept his fascination for the ball and continued his loud arguments with anything that strolled passed on the green belt. His legs became shaky but his spirit never failed. More pictures of Ben here.

Yesterday, he died in the garden.

Ben dives for the lost ball