On the road, Photoblogs, South Africa

Back in January this year, when the Southern Cross was still filling our South African nightly skies and the FIFA World Cup was no more than a distant 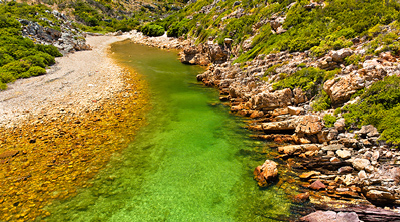 future thrill, we took the trusted Kombi for a drive around False Bay. Leaving Cape Town behind, we crossed the Cape Flats, zipped through Somerset West and wound our way along the edge of Cape Hangklip towards Betty’s Bay.

The ocean was just delightfully turquoise and the sky streaked by rare cumulus. As always when exploring South Africa, we saw our share of wildlife. From the top of a hill, I spotted a great white shark cruising near a rocky shore, less than half a mile from a beach where surfers paddled through wave sets.

Then in Betty’s Bay we visited yet another South African penguin colony, less idyllic than the one in Boulder’s Bay, but as prolific and definitely smellier. I haven’t yet gotten over my surprise of mingling with the comical birds in a 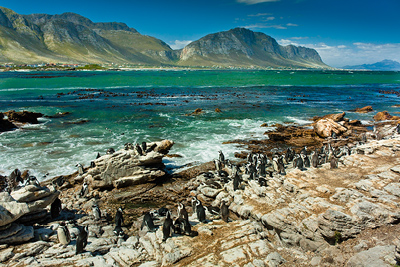 temperate environment. With my eyes half-closed, I could almost pretend that the sun-bleached and guano-covered rocks were in fact ice and snow. There was something odd to the scene, as if a giant blunder had been done at the Creation level and a drop of arctic life had splashed into African heat.

But the penguins seemed well-adjusted and happy, and despite relative tourist activity and the clicking of cameras, they just didn’t mind our presence and did what penguins do best: mostly nothing.

Read 66 Square Feet for a more extensive post about the drive.