It’s over. The biltong recovery failed.

New mold grew so fast on my rescued blitong bits that I could almost see it move. At Marie’s suggestion, I decided to at least take a look at the microscopic universe that was invading the delicacy and setup my makeshift macro gear, but I did a poor job and the shoot was messy.

I have my lack of patience to blame, in addition to poor lighting in late afternoon and the disturbing fact that very high magnification reveals an almost constant shaking of our apartment, possibly due to the proximity of the BQE highway, about two blocks away. 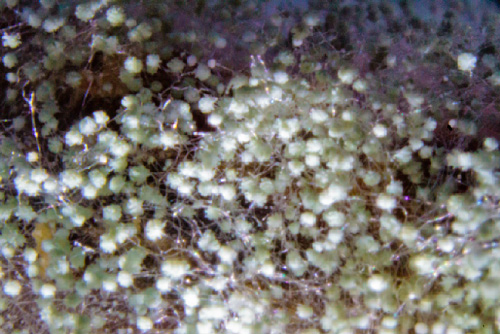 Highly magnified mold on the biltong

Here is the only salvaged picture, not even worth viewing full size, but still interesting as it represents only a few millimeters of mold growth. For such high macro work, I use my old 18-55 mm kit lens reverse-mounted on bellows that allow me to further increase the magnification, the whole apparatus being fitted on a rail that lets me focus manually by moving the lens forward or backwards, since reverse-mounting the lens renders the autofocus useless.

At such levels of magnification, the depth of field is razor-blade-thin and I have to lock my lens on a small aperture to regain a bit of depth, which means the Live View LCD screen becomes just about absolutely black and I must light the scene with a bright LED flashlight to focus… A complicated affair that requires much patience and calm, and which I seemed to accomplish with better results in Vancouver’s perfectly still early morning air than I have here.

Still. A fascinating world is always revealed by the inquisitive macro eye.