With such a terrible name, the Gowanus Canal could only be an error, one of those pinches in the very fabric of our space-time continuum, a glitch 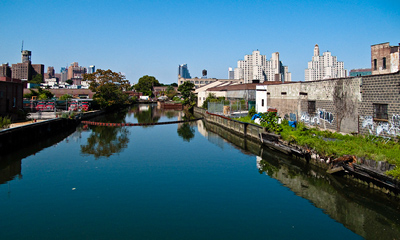 in the matrix. It sits in the middle of Brooklyn, coming from the Upper New York Bay and going nowhere, vestige of the past, frozen in its own abandon. The water is a murky green, polluted and heavy, barely kept alive by the slight tide-born current that endlessly carries garbage back and forth, like a disillusioned janitor leaning on his mop.

And yet, that short canal is the scene to some strange beauty and peace, witness to a bizarre urban alchemy of decay into melancholy, one of those transmutations water manages to achieve by its presence alone.

Flowers and vegetation have congregated to the shores of the Gowanus 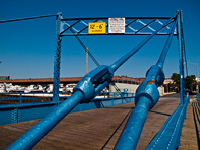 and line it with a lush crown of green. Old tired boats sleep tied up to older piles near even older bridges, forever resting on the lake-like surface and cherishing dreams of the long gone glory of their battles with the sea.

Small and modest, the bridges serve quaint residential streets, allowing pedestrians to pause on their way from here to there and ponder a history that 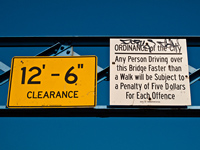 has left the canal so alone and yet so well guarded. Heads lean over the railing, eyes drift along the banks and minds wander effortlessly on intricate paths. Thousands of little fish are nursing in the canal and one soon realizes that the shadow of an arm raised high overhead has them fleeing in sudden bursts of shining frenzy.

The bridge over Carroll Street bears a strange anachronistic sign, so funny in its seriousness I had to bring it back to you. So the next time you drive over the Gowanus Canal, remember that speed is dangerous and will cost you. Exactly five dollars. That one time. And over again.