Like The Matrix before them, our Brooklyn rooftops are often being revisited, reloaded and re-photographed, and I must admit seeking through my sequels an even

Unobstructed, wide open and wildly tamed, the 66 square feet of our terrace make for a fantastic celestial – if a touch urban – observatory. The tall glass door has been valiantly protecting us from hideous mid-day heat while keeping the sky a stone’s throw away, but early morning and again as soon as the sun dips behind the block, we dare venture outside and, in Da Vinci’s footsteps, walk the earth with our eyes turned skyward. Well, we can’t really walk on the terrace or we would break something. So we stand and stare silently at the heavens 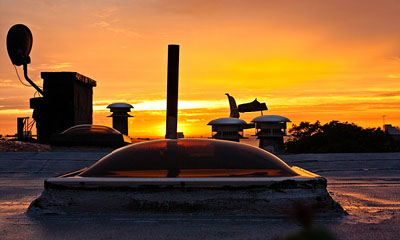 The terrace faces east and at night becomes an oasis of relative coolness – or said in New York summer language, the heat drops from sizzling to a mild 28 or 29°C. Storm clouds further east are highlighted by sun rays coming from behind us, giving a hint of what’s brewing on the western front. If things get colorful there, standing on the table is enough to catch a very good glimpse of sunset (the shots left and below were taken from the table with the camera at arm’s length.) And then, once in a while, the light show becomes so intense that we run across the hallway like excited puppies, climb a steel

ladder, open the hatch and hop onto the rooftop.

So we stand and stare silently at the heavens like Easter Island statues pondering their ocean.

From up there, one can see as far as Lady Liberty on her tiny tourist outpost, against a dull background of New Jersey flatland – in other words, almost another world. Ferries are slowly passing by in the distance, at times accompanied by a larger cruise ship.

Later, when the night has fallen for good and the sky turned dark, while planes are flying complicated flashing patterns and homing in on their targets like giant moths drawn to irresistible approach lights, candles are lit, the table set and voices lowered over dinners that beat my wildest dreams.