Update: Well it would seem I was wrong. Internet Explorer 9 now supports at least some CSS3 standards!  I just realized that it correctly renders both the "box-shadow" and "border-radius" properties, which is a wonderful improvement, especially since the new template is going to rely on these heavily!

T’was the year 1984. I wore crepe sole shoes and sideburns, and was about to ace my commercial pilot licence, for nothing as it turned out. I clearly remember playing in college with a VIC 20, little cousin of the Commodore 64 computer, but still using actual audio tapes for storage! To play a specific game, you had to rewind the tape to the spot where your program was recorded!

Yet at the same time, Pierre, a friend of ours who must have had undisclosed financial assistance, already played with an Apple Macintosh 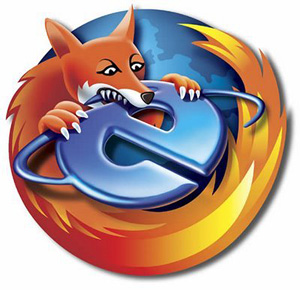 and was able to design – with a mouse! – pretty incredible graphics of aircraft navigation instruments to be printed and included in his homework. He became a helicopter pilot. Cell phones and the internet were still science-fiction matters.

Now let’s fast-forward some 10 years, to 1994. Moore’s Law had kicked in but things were still moving rather sluggishly. I had just sold my first computer, an Olivetti sub-laptop with a monochrome screen, simple organizer OS and 2 Mb hard drive, and upgraded to a brand new AST laptop purchased at Computer City in Singapore. It featured Windows 3.1, a passive matrix color screen and 4 (!) Mb of RAM. Internet was now an immature teenager and the Mosaic-born Netscape Navigator browser was pretty much the only tool available and thus dominated the World Wide Web.

A year later, with the release of Windows 95, a new virus appeared that was eventually going to dominate the internet for over 10 years. It was called Internet Explorer 1.0 and it was Microsoft’s direct challenge to Netscape. It was followed by Internet Explorer (IE) 2.0 within months. With these, Microsoft initiated a take-over that would be unstoppable. The Browser Wars had begun. Developers started to brand their web sites as "Best Viewed in Netscape X" or "Best viewed in Internet Explorer", a silly competition that reflected the two companies’ already diverging approach to standard-compliance and prompted the emergence of a WWW Consortium based set of rules for a cross-browser experience.

Bundling Internet Explorer version 4.0 with the Windows Operating System in 1997, Microsoft turned the tides for good and despite an unfair advantage that led to the infamous Anti-trust lawsuit, it managed to finally eradicate Netscape. By 1999, IE was the most widely used browser and its usage peaked at about 95% of all users worldwide around 2002. The first round of the Browser Wars had been won.

By 1999, IE was the most widely used browser and its usage peaked at about 95% of all users worldwide around 2002. The first round of the Browser Wars had been won.

However it was all downhill for Microsoft’s IE from there on. The lack of serious competition slowed the browser’s development down to a near halt and it was many years before an update to the buggy and vulnerable Internet Explorer 6 was released – and when it was, like the dying Netscape, it still lacked a great deal of standard-compliance.

Netscape might have gone under, but from its ashes and much sorrow appeared the Mozilla Foundation and Phoenix, a browser that would soon be renamed Firebird, then Firefox. The Browser Wars had re-ignited and programmers went back to their combat boards. Firefox’s goal was to remain standard-compliant and bank on IE’s pitiful reputation in terms of security, standards and performance.

By 2005, Firefox was competitive and innovated a great deal. I switched to it around that time, sick of the many failures of IE 6. Internet Explorer 7 was announced just about then, too. Another browser, Opera, was in its version 9 and while it lacked the glamour, promised to behave better than IE.

In 2007, Firefox and Internet Explorer were running ahead of the pack, the former finding its stride and the latter huffing and puffing. IE still wasn’t standard-compliant. Apple had entered the Wars and its Safari browser was reclaiming a well-deserved Mac audience.

Google, the new internet giant, had been watching the fight carefully and after silent training and secret maneuvers, it launched its own Chrome browser in 2008, to which Microsoft replied with IE 8 in 2009. The Wars got bloodier. Some people took them all quite seriously and went on funny campaigns.

As I write this blog post, Firefox 4 is in beta stage, Chrome hovers at version 7, Opera is up to 10 and Safari to 5. Alone in its corner, Internet Explorer 9 has been 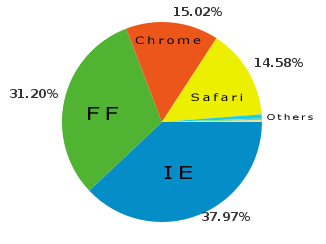 released as an early beta (a first for Microsoft) but despite all the years, it still remains – as incredible as this might sound – non standard-compliant. Of all the above mentionned browsers, IE is the only one that is unable to render the CSS3 rounded corners and drop shadows of this blog correctly. To the left is the current distribution of browser power as per my blog’s visitors. It is commonly accepted that the percentage of Firefox (FF) and Chrome users is much higher on "geeky", technology-oriented blogs. I guess I’m not geeky enough.

If you are surfing on a x.x version of Internet Explorer right now, we’ll have a minute of silence for you. Break free of it now! There are plenty of superb web browsers out there, all free, all mostly standard compliant and each one of them capable of offering you a much better surfing experience than IE ever will. It’s very hard to say who will win the Browser Wars but one thing is for sure, Microsoft will be the great looser. It’s managed to retain a portion of its initial market share simply because, still being bundled with the Windows operating system, it arrives in the house of all the computer users who will never question Windows and keep hypnotically clicking on the IE icon every time they need to go online. Nobody really chooses to stick to Internet Explorer. It’s just an implied acceptance.

I don’t know of anyone standing voluntarily on Microsoft’s side, with the exception of a few disgruntled soldiers with personal reasons to hate Firefox or Chrome. The rest of those who still use IE are just either lazy, ignorant of their own weakness or unsure of how to proceed to make the jump to light speed. It’s so easy, though: just pick a browser and google its web site. Find the download link, install. That’s it. And if you can’t do that, feel no shame. You are about to make a good move. Ask your neighbor, the mailman, the plumber, your 5 year old kid or Oprah. This is 2010 after all. Almost everybody else should know how to install a browser.

Lift up your right arm, move your pointed index towards the future of the web and say: "Engage."

Towards the end of that install, when asked whether you’d like to import all your bookmarks from Internet Explorer, raise a Vulcan eyebrow and say: "That would be logical." Then the browser will probably remind you that it is not your system’s default browser and would you like to fix that.  So like Captain Jean-Luc Picard at the helm of the Enterprise about to boldly go where you have never gone before, acknowledge with a nod and dictate: "Make it so!"

All you now have to do is click at your leisure on the new colorful browser icon and ready yourself for warp speed and full standard-compliant effects while sitting back in your chair with a content but restrained look on your face. Lift up your right arm, move your pointed index towards the future of the web and say: "Engage."