Bu(n)tzen Lake on a rainy day

It was late. The day drew to an end as I drove away from the partial sunlight of red flooded fields towards the mountains, and menacing clouds were gathering up to greet 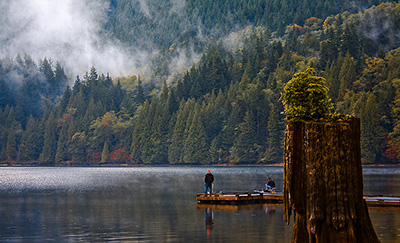 me into the evening. There wasn’t much traffic on the road – the only people out and about probably being chronic Sunday shoppers. I crossed New Westminster, following the Fraser River for a while and then headed north to Port Moody. Moody indeed was the sky when I got there; dark, convoluted clouds clung to the peaks that tightly surround Indian Arm, shrouding them in a tight pale robe. I dashed right through the town and turned uphill through a residential neighborhood, bound for the end of the road. Houses grew scarce, rain began to fall and the world turned black. It was a strange day to visit Buntzen Lake. I would, however, be likely to find some peace by its shores on such a lonely night.

I parked in an almost empty lot as a few people rushed back to their cars, escaping the deluge. But as I was walking towards the water through magnificent trees, camera safely tucked into my jacket, I could feel the rain easing up; it seemed that against all odds,

the sky might have had exhausted its anger for the night. When I reached the shoreline, merely a few drops were still troubling the mirror-like surface of the lake and while clouds still hung on to the slopes of the mountains above, a clearing was in the making at the opposite end of the valley and some blue sky timidly appeared. The light was uneven, complicated and fragmented. There was a slight flavour of my Alps in the air.

I walked around for some time, taking pictures, breathing in the humidity, listening to the forest noises and noticing an absolute absence of nearby civilization, except for an odd generator across the lake. By Buntzen Lake, deceivingly close to Vancouver, one can feel isolated 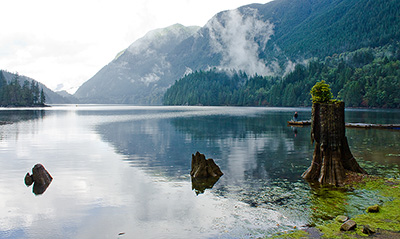 and forget about the city. I looked around, perplexed, attempting unsuccessfully to reconcile the two worlds that were elbowing each other in my mind, like kids competing for the attention of an adult. Here I was, mostly alone in a beautiful mountain setting, with the City of Glass nearby and the Pacific Ocean’s water just on the other side of a ridge. But then there I wished I had been, far to the east in an urban urchin of incredible size, an ant amongst millions of other ants, finding beauty in the company of just one.

Nothing is ever perfect, except, maybe, imperfection. But I sure wished Marie had been there.