After two years of patient hopes and a few bursts of frantic investigation, we have finally found the lost family track of the Cape Dwarf Chameleon, endangered specie as per CITES.

They had disappeared from Maureen’s Constantia garden years 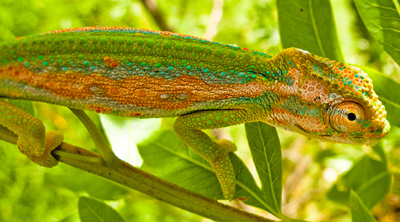 ago but sightings were still being reported by various friends of ours in the greater Cape Town, so we set out on yet another survey of the green belt, a long path of nature right behind the house. The dogs were happily running around.

Casually, Marie headed towards a tree, stood there for a moment, and then called me over in the imperative tone she had used when she spotted our first leopard in the Kgalagadi. “I’m looking at a chameleon right now,” she whispered. She always makes it look so easy.

I took many average pictures and while Marie was walking the dogs back home, I stuck around and found 5 more individuals, within a 20 meter radius, hidden in small trees and seemingly enjoying the afternoon sun. The little guys are incredibly cute and totally remind me of seahorses; they shy away from the camera, spinning around a branch in a way that makes it very hard to photograph them.

Nature has such lovely surprises up her sleeve…