Carpe Diem, when I can

Sometimes, unaware, I catch myself complaining. It happened to me last night as I’d gone out to shoot the sunset. I was missing my bokkie. A stubborn layer of clouds was

obstructing MY horizon and dimming what I had hoped would be an explosion of airborne colors. And there were too many people on MY beach – well behaved, mostly quiet and enjoying a beautiful end to the day, but too many of them. So I snapped a few pictures and went back home without touching the fancy drink I had brought for myself, and which I drank sitting next to MY balcony instead – not on it because the bloody pigeons are winning the battle and covering it with an effective layer of guano. Effective, I say, because it turns the balcony into a stinky minefield for me, and a happy playing and breeding ground for them. Whoever was criticizing pigeon-dislike recently should be tied up and rolled into said layer until he understands the ridiculous stink of his pompously futile discourse.

But then, at home, sipping on my Ice Bet while I glanced at the sunset pictures which turned out to be quite nice,

it suddenly dawned on me that I was an idiot. Yes, you might have known that about me for a long time, but for my part I frequently lose sight of such a trivial fact. There I was, bitching about nothing and less, standing in the middle of a little paradise, my mind filled with the presence of a beautiful freckled angel.

Understand this: I live in an extraordinary place. From my balcony, I see the ocean. The beach is located exactly half a block away. In the morning, I am woken up by the cry of seagulls. If I walk lazily 10 minutes further, I get to a park that is arguably North America’s largest urban green space, and certainly the most stunning. From home, I have 30 km of uninterrupted waterfront running/biking paths available to soothe both bored pleasure and addicted running needs. So my nearly daily encounters while running are raccoons, swans, harbour seals, turtles, eagles and 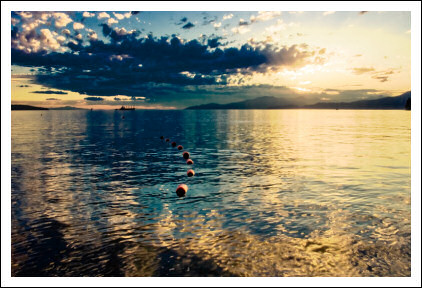 balanced stones. A little over an hour by public transit takes me to bear country, lush temperate rain forests, wooden suspension bridges, pristine mountain streams and peaks that remain snow-capped most of the year. Killer whales are roaming not too far to the south. Cougars to the north. Yet within five minutes from home I have groceries, liquor, drugs, food, movies, transport and restaurants. I can walk to work in 35 minutes. Actually, there’s nowhere downtown I can’t walk to. And there are flowers everywhere.

Yet I bitch. Is it human nature to always want more? Probably so. And to be honest, I will soon get it. But the fact remains, this.is.extraordinary. So I do my best to cool my head and appreciate it all as one does of an ephemeral bloom, long awaited, sudden, intense and so short-lived, yielding its glory to the distant glow of memories and expectations of what’s to come next, all over again. The seeds will have traveled to new grounds. The bloom is always different. The awe remains.