Cartwheels over Lesotho, Part 6 – Flash Flood on the Road to Rhodes

My mosquito bites soothed and Himeville left behind, we drove southwestwards, keeping the dark Drakensberg walls to our right, through rolling hills and immense fields. This was Zulu land. We had already noticed around Himeville that 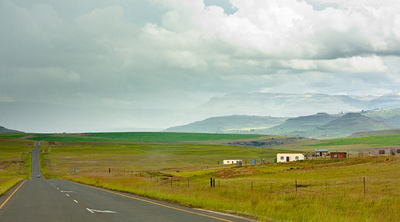 the locals were friendlier, more self-assured. The Zulus are a dancing people. It seemed to show.

We took two shortcuts. The first one, a long and rather straight dirt road across vast fields, was pleasant and efficient. So we got back on the main road and soon after Mount Fletcher, took another right into the unknown. Rhodes was less than 100 km away, now. We’d have to go over two more passes, through the Drakensberg itself and down onto Rhodes on the western flank.

There were giant storm clouds on the horizon, stuck on the mountains, dumping copious amounts of water where they sat. We kept an eye on them and I think I recall saying that we would most likely avoid the worst. As they say in cartoons, duh!

It becomes very tricky to judge the direction of travel of a storm when driving on a winding road. One minute it escapes, the next it is charging right at you. Rain began to fall. We didn’t worry. The Sani Pass was behind us, and with it, all memories of difficult driving.

Then it began to poor. The dirt road got wetter and wetter. Our Landcruiser was getting a real mud baptism, to Marie’s absolute delight – she hates a clean 4×4, a sure sign of urban driving and cowardly itineraries. She would aim for puddles and relish in the sound of splashing, momentarily speeding up the washers in a 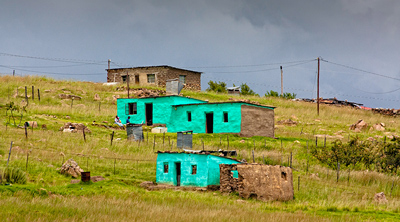 Soon, however, those puddles were so deep they slowed the vehicle as if we’d dropped into molasses. We began aiming around them. The soil was a striking red and small rivers started forming under our wheels, reddish and still hesitant in their downhill path.

The downpour had somewhat weakened, but rain had been heavy on the high peaks above us. All that water was, at that very moment, finding its way down the slopes, gathering momentum and strength as a thousand small rivers coalesced and grew stronger and meaner. We were now climbing steadily towards the Pitseng Pass. The zigzags reappeared and once more, we were inching our way along steep and exposed terrain.

Road conditions here were still a blessing. Despite the absence of paving, the soil and gravel surface had been relatively well maintained and kept free of boulders. 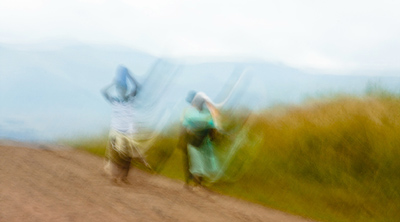 But this turned out to play against us because the red floods seemed to flow along paths of least resistance, and the road was such a path. The largest rivers cut straight across our way, flowing with gravity, but a lot of water was running down the road against our travel.

A man was standing outside his jeep at the bottom of a slope, legs firmly planted in the flowing red water, gauging the weather and the day. I stopped next to him and inquired how far we still had to go for Rhodes. He waved at the mountains: “You have to go over the whole Drakensberg.” That wasn’t encouraging. I asked what he thought of the conditions. He tapped the ground with his submerged boot and said: “It’s solid for now. Don’t know if it’ll last.” Marie understood it’s strong now, which could have meant the same, so we decided to go forward.

The largest rivers began to dig trenches across the road and forced us to slow down further, and steer towards the shallowest spots. Things were becoming unnerving and we had a long way to go. When one is driving uphill at a walking man’s pace, negotiating a flooding dirt road alongside a precipice, a simple kilometer takes on the scope of a small world. And we had many worlds to go.

Then there was a deeper submerged pothole and we bounced to the roof. That one had caught us unaware. By the time we figured things weren’t 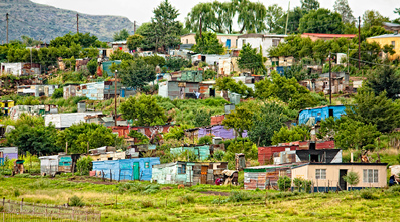 looking good, we had been driving uphill in worsening conditions for about an hour and I had to admit the way was closed behind us. There would be no turning around. We had to push on through. Marie was behind the wheel and despite the bumps, doing a masterful job of navigating through the growing rush of water.

To keep spirits up and make us move forward, I set our aim to the simplest goal safely achievable: we would make it to the top of the pass and assess. If things were still getting worse, we’d hunker down and wait it out up at the top where we would be safe from the threat of water. Worse came to worse, we had our tent and could pitch next to the road in a field.

To achieve that goal, though, we’d have to make it up the pass. The terrain had become almost vertical and rivers coming from uphill were now falling onto our path in real waterfalls, digging further into the road that was becoming badly damaged and cracked. The threat of a landslide was now on stand-by in my mind.

All into her driving, Marie asked me to take pictures of the incredible liquid mess we were plowing our way through, and I replied much too dryly that this was no time for 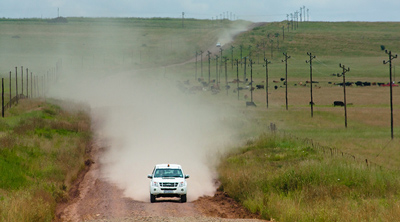 pictures. One hundred percent of my attention was focused on the road and I wanted hers to be there too. While she negotiated the torrents at our feet, I would gauge waterfalls up ahead and calculated the safest spots between them, in case she had to step on it to get us out of trouble and needed a shelter. It was a long way down to where the water was pouring. She did manage to get a few shots and her own very good story is here.

And yet, we made it to the top of the pass without serious trouble, took a deep breath and wondered whether to push on as far as we could, without exposing ourselves to a similarly risky descent. We had arrived on a high plateau. Water here couldn’t flow down as easily and had instead accumulated, forming deep puddles on the muddy path.

Some puddles seemed so deep that I decided to walk through them before letting Marie drive in. I took my shoes off and ventured out in the red mud, never getting water much higher than my knees. But the mud was extremely soft and slippery and the heavy Landcruiser would sink in and struggle. Marie was having a hard 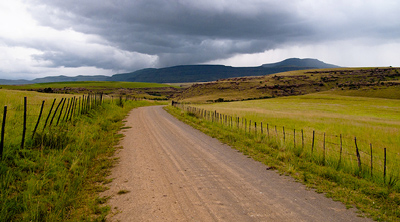 time, the back of the vehicle slipping sideways and threatening to get her stuck in a bad place.

At last, after slowing down a bit too much, she felt the truck slide to the left and could not hold it back as it leaned into the ditch. There was nowhere to fall and we stayed there, at a 30 or 40 degree angle, while she swore softly. She had been driving for many hours and handled the flooding slopes brilliantly, but stress had taken a toll and she was just tired.

I offered to take the wheel, hurting her feelings a bit. “You think you can do better?” she said defensively. “Maybe you have more experience driving through mud?” “No,” I answered diplomatically, “but driving in snow, yes. It’s the same. One brown, one white, both slippery. I’ll manage.”

I switched to low gear, drove us out of the ditch carefully, and then opted for a forceful entry into subsequent puddles. With enough speed and power, I could retain directional control and steering. Too little or too much speed and I 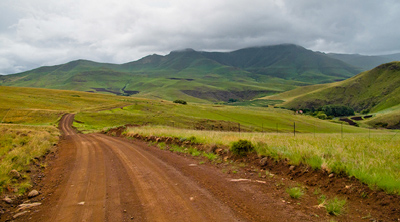 A pick-up appeared far ahead, coming our way. When he got to our height, the driver slowed down and lowered his mud-covered window. We asked him about road conditions ahead. “It gets better,” he said. “There are maybe two remaining puddles, and then it dries up. The road to Rhodes is good.” We thanked him with relief and he took off in a splash.

The rest of the drive was an easy ride. We drove through the following Naudesnek Pass in thick clouds, unbothered by water, and down into Rhodes. It was an interesting small town, showing signs of having been a happening place in high season, but for now asleep and peaceful, or even ghostly. The dirt roads were shaded by tall trees and all surrounding fields were impressively green. Here the 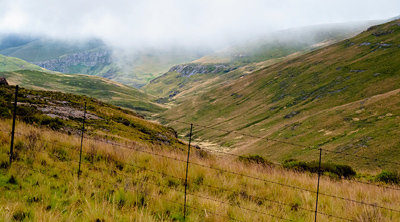 The very cheap campground we had anticipated to use was a horrible backyard disappointment. No electricity, certainly no other campers – who would have wanted to camp there, really? – a miserable, dark and stinky ablutions block, flies buzzing around the toilets. We bailed and found a neat self-catering little house instead, run by the campground owners who also had a B&B and located at the village’s entrance right across from the police station.

It had once again taken us over 8 hours to cover 300 km. The truck was dirty, our backs sore and our stomachs empty. It was time to rest. In the morning, we’d change beats and leave the Drakensberg behind us, headed down to the coast and Addo Elephant National Park.