Out of Rhodes by mid-morning, we drove lazily through patchy fields, their freshly plowed soil dark as coal and contrasting strongly with lush green vegetation all around. In Barkly East, the dirt road was left behind and with

it, all driving worries. We drifted north to Lady Grey and Aliwal and then plunged directly south on the wide N6, picking up speed and making up for a slow start.

Cruising towards the sea, we realized we hadn’t booked a campsite at Addo Elephant National Park – a potentially fatal oversight on a Friday night due to the close proximity to East London and Port Elizabeth. The city folks were likely to escape for the week-end and Addo would be a prized destination.

We stopped in Queenstown and found a small computer store that offered internet access. The National Park web site was navigated to easily, and sure enough, it was fully booked. I came to grips with a disappointment the size of its object: I would not see elephants on that trip.

Scrambling for options, we remembered seeing a sign for 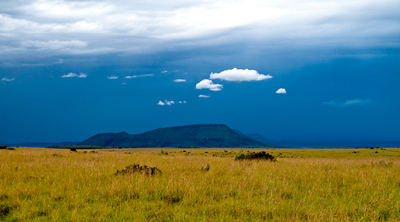 Mountain Zebra National Park on our way to Lesotho, while we traveled on an opposite course further north. It was in the general direction of Cape Town and would allow us to keep our subsequent legs relatively unchanged. We called the reservation office and they had space, so we took off westward-bound with renewed hopes.

Mountain Zebra is a small park located near the town of Cradock. It stretches across tall hills resembling those of the Karoo National Park and we arrived there in similarly unsettled weather. Thick dark clouds hung in the distance and fleeting curtains of virga appeared here and there, as an unusual amount of rainfall still affected this normally dry region.

The reception building was far inside the park and we spotted some bokkies along the way. Surprisingly, 2 of the Big Five were present in the park: buffalo and black rhinos, in addition to cheetahs and many species of antelopes. And of course zebra. 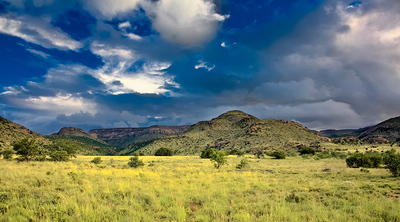 Our tent was pitched facing the hills, and braai prepared. Vervet monkeys were everywhere and labeled a pest. We witnessed them pillaging the supplies of fellow campers gone on a drive and who had left their food a bit too accessible.

We spent 2 very nice days in the park, dealing with rain and wind as much as heat and sun and driving around on scenic loops filled with game – though the elusive black rhinos and cheetahs remained hidden in the park brochure they inhabited.

On the second night, Marie was braaiing lamb chops and boerewors in a rapidly thickening dusk when she suddenly noticed a chop was missing on her grill, and the sausage coil seemed shorter. She had merely turned around for a few seconds to prepare something on the lowered rear hatch of the Landcruiser that we used as our kitchen space, never stepping further then 10 feet from the braai. She swears the chop count went down by one and I agree the boerewors looked quite short. So something with an obvious disdain for fire and red-hot coals might have jumped up and pulled a fast one on us. It could have been a jackal or a monkey, or her imagination. We’ll never know. But from then on, we watched our food very carefully.

Moody weather actually made for some incredible colours. Most of the park was located atop a long plateau from which the eye got lost into this distant horizon of storms and steel-blue rolling mountains melting into a foreground of fluid golden grass. 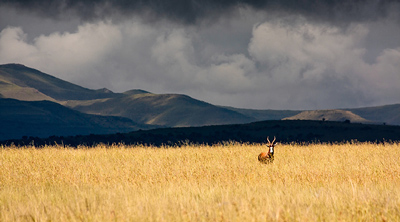 potentially dangerous animals, but since we never saw them, we felt cheated of a very much needed bout of freedom. Our mood was changing subtly as the trip neared its end. We would soon return to relative civilization and while there remained almost three weeks before our flight back to North America, the precariousness of our upcoming situation was starting to creep into daily reality.

The last leg of our road trip would finally take us down to the coast where we’d camp in Tsitsikamma, near the Storms River mouth. After that, we planned on stopping in George to see our friend Bevan, and that would be that. A dash along N2 would lead us back to the Cape where two corgis and a lab were waiting for us to take on the green belt. The Constantia garden would smell of many flowers. Wine would be poured, along with memories, and stories would spill into the candlelit night.

We would have done cartwheels over Lesotho and returned. 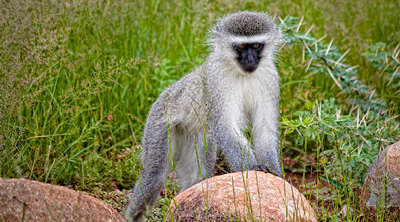