It must be a cataclysm! I suddenly wake up at the terrifying clash of thunder and the roaring furry of a thousand galloping horses right above my head.

But then the blurry haze of sleep thins out and I am forced to retrofit the glamour of my dreams with a grim reality. The thunder was simply caused by an exploding set of Star Wars Lego™and the herd of horses was in fact one of cats. Three of them.

I look around confused. It’s still pitch black in here. It must be night time. Of course; cats only play at night when they can actually wake you up. Then they sleep all day.

So I fumble out of bed in a catacomb-like darkness, feel my way up some stairs and aim for the fridge. Something cold to drink and I’ll go right back to sleep.

A brief but sharp shriek makes me jump back in shock. I stepped on something. It was furry and warm. How could a cat manage to go from epic games across the room to lying in the middle of the stairs in such a short time?

I pour myself a glass of juice, chug it down, pour another one, drink half of it and put it down on the kitchen counter to close the fridge. A shadow jumps up behind me, lands on the countertop and knocks the glass down. Thank god it was plastic. The shadow flees as fast as it came, equally eager to avoid the cataract of juice and my unforgiving wrath.

But I’m wide awake now and decide to step outside to have a look at the stars. I should know better. As I slide the mosquito screen open, a shape slips between my legs and escapes out, while another bumps into me after a slight miscalculation.

Chasing a black cat on a dark night in a garden with no lights is a little depressing. It makes one ponder a futile existence in a meaningless void we call universe…

Eventually, the black cat is trapped and rushed back to the sliding door, which once opened lets out another shadow. This kitchen expedition is turning out to be a catastrophe. I catapult the first offender inside, run around the pool a few times to catch the second, negotiate my re-entry, and a great wave of relief surges over me. I didn’t even think of looking at the stars, but going back to bed will be my catharsis.

When I get back to my room, I sneak in, close the door carefully, smiling at myself with satisfaction, and collapse brutally on the bed without even turning the lights on.

This time, we both shriek. Me and the third cat, that is. 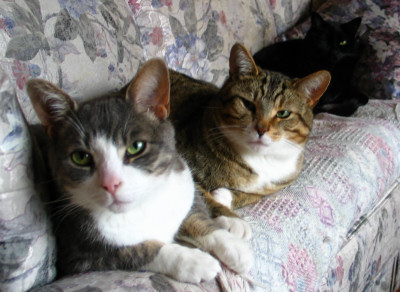