While the Caribbean was pounded by hurricanes, courageous little birds were preparing for their journey south
Fauna, New York

A moon ago, I decided on a whim to go seek hummingbirds in Central Park. We had found them in the Conservatory Garden years back while living in Harlem. Even though the season was about right for their fall migration, the garden yielded no luck. Having gone for a walk in the Ravine and beyond to look for birds of prey, however, I ended up finding a spot along a little creek humorously called the Loch where hummingbirds hung out, attracted by jewelweed and bright crimson cardinal flowers.

Sitting on a sloping slab of stone above the water, I watched patiently as the tiny birds flew in and out, learning their patterns, identifying their favorite flower patches and memorizing resting branches. I did not see the red patch of a male so I think I had acquainted myself with a mature female and a juvenile ruby throated hummingbirds.

The following weekend, I went back and managed not only to find the mesmerizing birds again, but caught two tangled in either a dogfight or courtship shenanigans, and then again later simply resting in a tree, maybe exhausted by all that feather action. As I understand it, these guys are solitary, only coming together briefly to mate, days to a few weeks at most –  yet my picture doesn’t reveal a male’s colors. Not sure what they were doing together then. 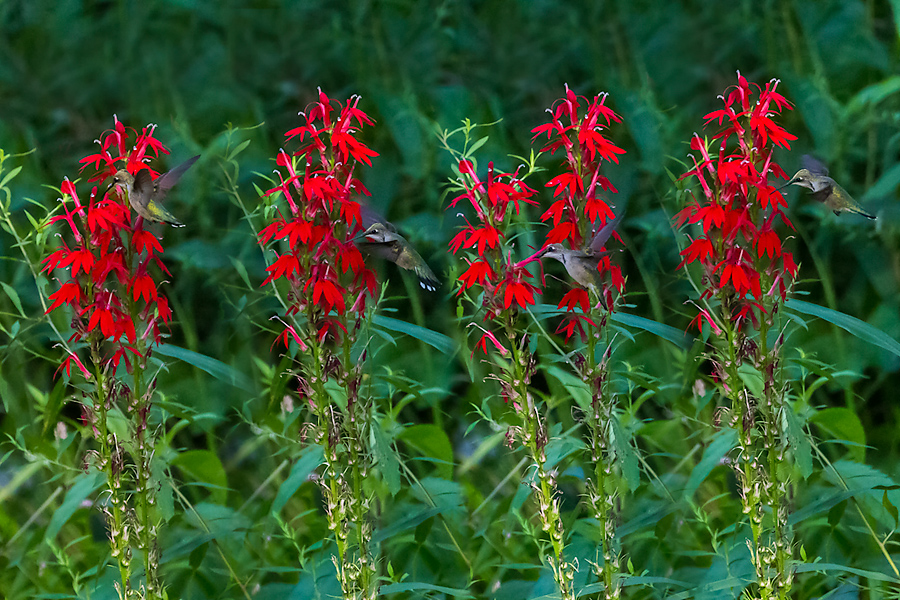 So while these images are not as impressive as the two previous sets – which were shot at a rather short range, only a few feet at times – I am pretty happy with the way they came out. To put things in perspective, consider that they were shot from a distance of around fifty feet. Now these adorable birds are only about two inches in length as adults – and I might have a smaller juvenile in there which is shorter than a good-sized dragonfly even if a bit fatter!

I was shooting in late afternoon and the dying light forced me to use a high ISO setting to compensate for an aperture of only f8, given that I was at my maximum 400 mm focal length with a 1.4x teleconverter. I was able to freeze the wings on only some shots, and that’s with a 1/2000 shutter speed – that’s one two-thousandths of a second!

In addition these were taken in the wild, and by that I mean in the park’s open spaces rather than a confined garden where one can camp next to the most attractive flower bed. Hummingbirds dart around so fast that the naked can barely track them and often mistakes them for insects. Their wings flap at an amazing rate of fifty to eighty strokes per second, depending on sources. 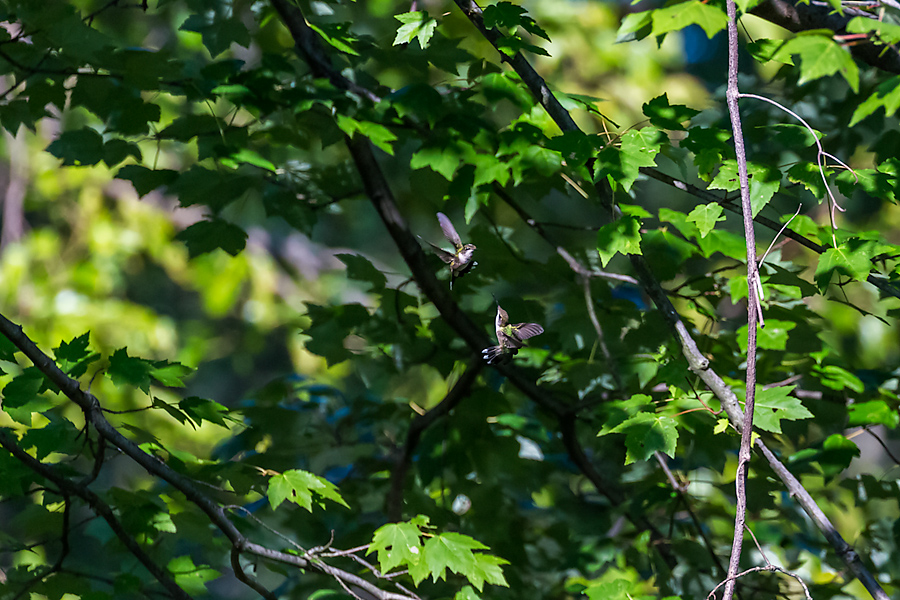 The life of hummingbirds happens fast. They cannot expect to live much longer then five to seven years, their tiny heart pumping furiously at a rate of over twelve hundred beats per minute throughout that time. Everything they do is about energy management. Such minuscule birds should not be able to sustain a crossing of the Gulf of Mexico in their biannual migration, but they manage it by putting on weight and stocking up as much as possible before departure.

I am always in awe when I see one, remembering where it came from, and how hard it had to work for it. Kind of like us in a sense. Long journey behind and still the road stretches forward, often winding, full of unknown and treachery, storms and obstructions, a confused past leading to a fuzzy future. And yet how we go for it!