Return to Chamonix, Part 1 – France Is In The Air

After decades of absence I revisit France, introducing Marie to the idyllic mountain town of Chamonix
Airborne, Chamonix, On the road

The year is 2019. With the exception of a couple of brief, in-airport layovers while flying to or from South Africa with my head in the clouds and thoughts adrift, it has been a decade and a half since I committedly set foot on French soil. A small eternity.

So when, casually brandishing the double-edged sword of patriotism and paragliding, Marie uses a little leverage to try and pry me out of work and convince me that a France trip is unconditionally needed, I only hesitate long enough to push aside my responsibilities and the guilt of not visiting family instead, and then I start pondering. Two European regions forever own my heart: the southeast of France, also called PACA for Provence, Alpes, Côte d’Azur—this is where I grew up—and the Alps proper which magnanimously divide their sheer beauty between Austria, Germany, Switzerland, Italy and France.

Balancing budget, scenery change, resilient memories, wow-factor and paragliding potential, we set our sights on Chamonix. While Marie has visited the Swiss Alps and even Paris before, she has not really experienced rural France from the inside. And she has led us on so many extraordinary trips through Southern Africa that it is time I reciprocated as a guide.

Geneva and Air France, it turns out, form the most economical combination of stopover and airline. Hooked, we book. A Swiss rental car to transit to France and then roam, an Airbnb in Cham’ for ten nights, one in downtown Geneva for the last evening, it all falls into place nicely. 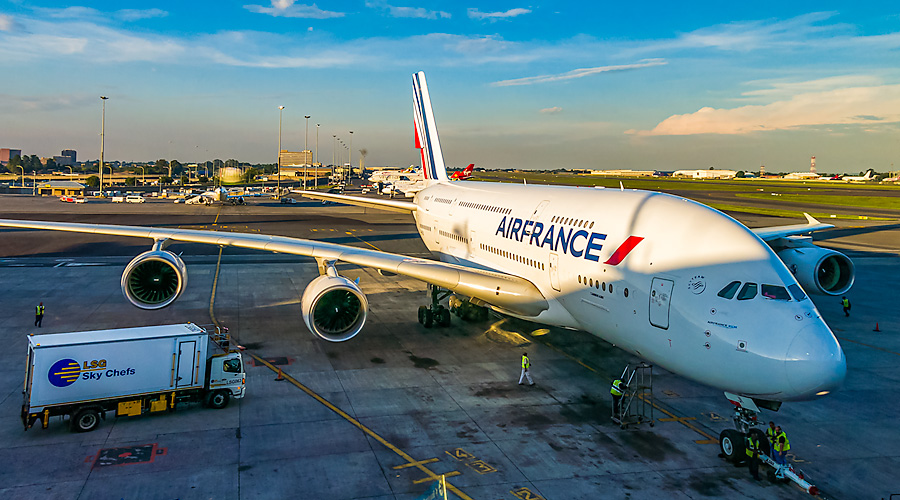 As an added bonus, our outbound flight, Air France 08, is to be aboard the mighty Airbus A380. I have reserved us seats on the upper deck where a small section at the back is allocated to economy seating, less of a cattle feeling even though being on top also means the cabin is tapering off and a bit narrower than the lower deck which expands out.

Largest passenger plane ever to take to the skies and a marvel of engineering and aeronautics if I may say so, the A380 is my favorite aircraft bar none. We comically have a nightly Brooklyn appointment with Korean Air flight 85, a sister A380 bound from Seoul which cruises by on approach to JFK around eight-thirty at night, still ten thousand feet high—possibly following the KINGSTON or LENDY STAR for the aviation geeks among you. Its unmistakable massive silhouette, unique proportions and turtle-slow pace never cease to make us smile.

But back to our story. On the afternoon of May 31st, a Friday, we leave Ntini at JFK’s long term and quite expensive car hotel—alternate street parking making it impossible for us to abandon her at home on the street and take a cab to the airport instead. From there we board the AirTrain to our terminal and immediately, trouble sprouts.

The AirTrain, JFK’s only means of internal transportation between the various terminals, parking lots and subway stations, had shut down for testing the night before. When we arrive in late afternoon, it still has not re-opened!

The enormous airport has been operating in absolute chaos all day, and too few bus shuttles are replacing the automated train. Lines have formed at each inbound station, hundreds if not thousands of people long, tempers are flaring and turbulence is high.

We resign ourselves and wait. It takes us about two hours to travel from the Lefferts Blvd AirTrain station to Terminal 1, something normally done in under ten minutes. But I had planned to be at the airport three hours early as officially requested by cautious airlines and it pays off. Tired, frustrated and silently worried about this fiasco being an omen, we board the behemoth on time, find our seats and wait. But the plane does not depart.

An apologetic captain eventually explains over the PA system that we are awaiting for luggage operations to be completed. It is likely that many luggage handlers and tarmac crews were also affected by the transportation crisis and are MIA. The clock ticks. Speaking of which, mine develop and my left eye twitches. After an hour, I am getting very nervous about our Geneva connection, which was tight to begin with.

Then against all odds, the doors are closed, armed and crossed-checked. We are pushed back from the gate and a “France is in the Air” fashion-styled safety video starts playing. The captain, finally able to play with his toys, announces in a chirpier voice that they were able to adjust our flight plan and we will make up the lost hour en route, estimating Geneva on time. I silently cheer. Vive la France! Chamonix, here we come.

Biased, me? Of course. Air France remains one of my favorite airlines. The cabin crews are, well, they are French. They smile, they laugh, good-naturedly. They know how to wink. They can have an attitude but will never make you talk to the hand. And, at the apogee of trans-Atlantic economy service, they serve Champagne in lieu of apéritif and Cognac as their final, rounded dot on the meal service, perfect for a spirited coffee. No other airline I know of does this.

Once again on Air France/KLM the plane’s entertainment system is excellent, with large, high-quality individual screens, a good movie selection, as well as USB and power ports. This of course has become standard on newer planes, but most fleets do lag behind.

We land on time in Paris Charles de Gaulle, eighth largest and busiest airport on our beloved blue planet, after a smooth flight. As we taxi towards our gate, incongruous wild rabbits flee through the grass in the shadow of our gigantic wings. It makes me wonder if the Parisian branch of Sky Chefs prepares more civet than others. I should ask Rémy.

Along with its subtly retouched identity, Air France has fine-tuned its connection routine. Despite an international arrival, the complexity of de-boarding close to 500 passengers from two decks into an airport half the size of Manhattan, a connection time of under ninety minutes and the need to change terminals (or rather to switch to a separate satellite of the gigantic Terminal 2), we transit smoothly, arrive at our gate like clockwork and the luggage follows without a glitch. 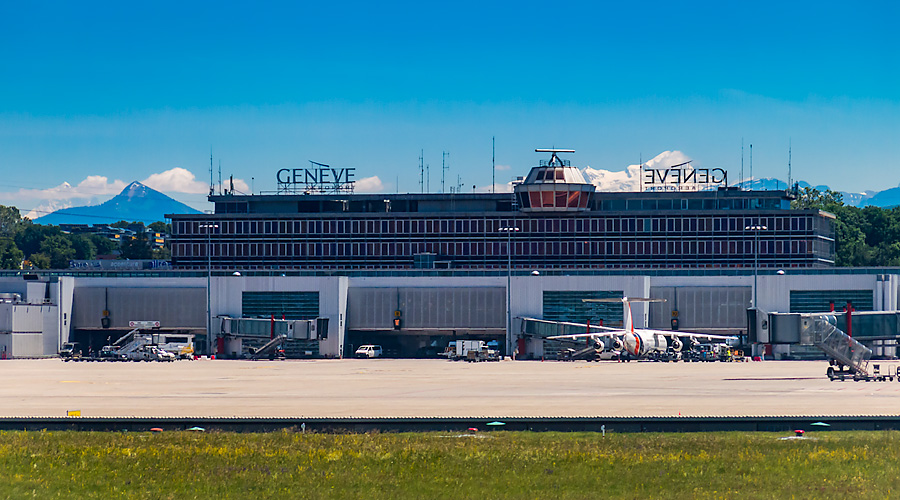 The flight from Charles de Gaulle to Geneva Airport lasts fifty minutes and offers a great starboard view of the snowy Alps on final. Then all too fast, the iconic fountain appears, rooftops whisk by and we have arrived.

We pick our luggage up—including my enormous paraglider bag which itself travels inside a rugged duffel bag I get wrapped for added sturdiness—and head to the rental car counter. Soon enough, we are hitting Swiss roads at the wheel of a disappointingly un-European Ford Focus. But it at least has a manual transmission and we manage to hook Google Maps up to it through Android Auto as the on-board navigation is a bit cryptic. The Ford is not unpleasant to drive but coming from our nimble Golf, it feels a bit like a boat and we soon nickname it “the cow”.

Negotiating our way out of the Swiss capital we head towards the border, an open check point where a few French officers are loitering on the side of the road, seemingly oblivious to vehicles, and suddenly, I am back in France. Home. Where a good chunk of my heart lives, and died, forever. For the first time in a decade and a half. To say I take a deep breath would be a serious understatement. Some things just cannot be written about.

The drive from Geneva to Chamonix is short, under an hour on mostly empty highways with a generous speed limit of up to eighty miles per hour, and with an ever-increasing view of the mountains which seem to magically rise from a fold in the Earth, like a  character in a puppet show, dwarfing us and as though intent on blocking our path.

The Mont Blanc massif grows more impressive by the minute and eventually towers above us like a mighty giant. Humbled, we stop for roadside pictures. Through a few steep and narrow climbs, the highway winds its way along the Arve river that flows far below in a dark gorge, we pass the branch-off to the Mont Blanc Tunnel which crosses right into Italy, and arrive in the Chamonix valley.

Our Airbnb is located on the southern end of town close to the river, but being a tad early we first raid a small grocery store to stock up on supplies. Marie’s eyes are wide. Even though the store is only a low-end convenience market, it stocks beautiful radishes, a wide variety of charcuterie and cheeses and lots of extremely affordable wine.

View from the flat

Our host Claire later greets us at the Airbnb, something which has become unusual in a system that is clearly abused and taken advantage of. Along with her husband Olivier, they rent a tiny apartment in a bottom corner of their own place, the way it should be. Their house is pretty, built in a typical alpine style with dark wood and a steeply v-shaped roof for the snow.

She gives us a tour of the premises, which of her own admission will be over quickly. An entry door opens into a tiny kitchen space with a table for two, a bathroom is tucked behind that and the bedroom sits opposite. It is not much, but it is enough and we are in the Alps!

In the front, which is actually the back of the house, we have our own little terrace with a bigger wooden table, a bench and chairs, and a small grassy patch before a little wooden shed at the foot of tall trees. Looking up and to the right, l’Aiguille du Midi towers high over the valley. Up to the left, le Brévent. As I scan the sky, paragliders are colorfully flying overhead. I am sold.

We are wished a pleasant stay in both languages—I could not help engaging in French but the tour was given in a decent English for Marie’s benefit—and proceed to offload the cow. A long day is weighing on our shoulders, I have been up for over thirty hours and have driven in three countries each with its own rules, peculiarities and navigational hurdles, but we cannot resist going on a short walk to the Arve, clear of residential trees and in full view of the peaks, which leave us in awe. 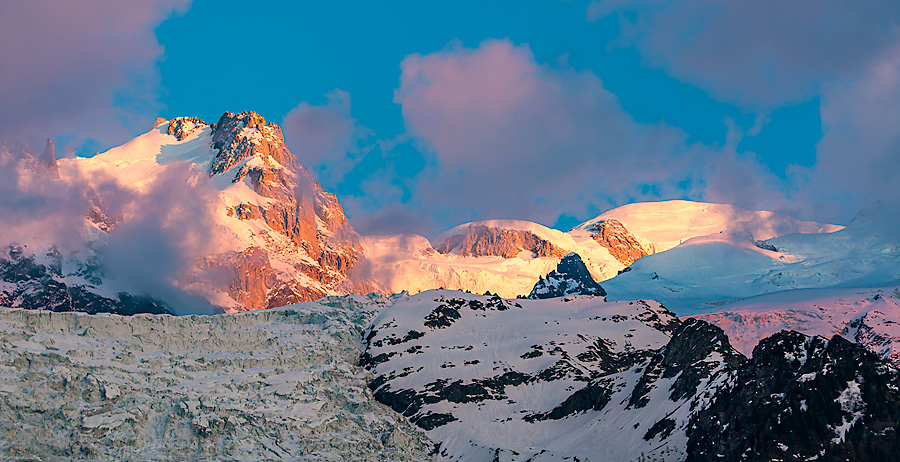 Sunset on the Mont Blanc Massif

We will meet Olivier later. He happens to be the newly appointed president of the Compagnie des guides de Chamonix, possibly the most famous mountain guide outfit worldwide.

Jovial, he will on a later day take me up to the balcony of an absent neighbor’s house for the most unobstructed panorama of his mountains, and start pointing and reciting the names of each feature above, to my absolute delight. The stories of my youth will unfold before my eyes as the sun’s last rays set summits ablaze far above the shadow-drenched valley.

That first night we finally settle down, pour ourselves G&T’s on the patio and take deep breaths of pure mountain air. Birds are chirping in the trees all around, welcoming us. The mountains are going to sleep. Yet again, in a never-ending fashion but entirely new environment, we have arrived.