The time to go home has come, we leave the Alps behind and spend a night in Geneva
Airborne, Chamonix

We leave Chamonix behind late morning on Pentecost Sunday, heading northwest through the Aravis massif towards Geneva. The weather has deteriorated into a stormy mess and we progress slowly under bleak light and tremendous downpour, mountains gently fading in washed-out grayness at our backs.

Having promised a friend that we would drive by the place where she grew up, we detour slightly towards rural Lully in the north, take a quick picture of the house as the rain lingers, and pushing on across an alternance of boring countryside and beautiful old woods, we reach the French shores of Lac Léman around noon. 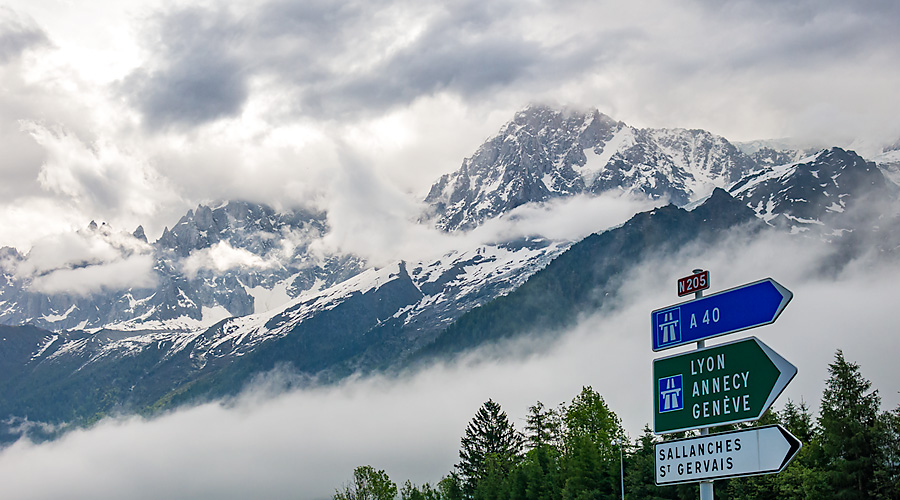 Angling south towards the distant city, the road now winds within spitting distance of the lake but just far and high enough for it to remain elusive, so we eventually venture on a small side trip and land in a cul-de-sac at the charming lakeside village of Nernier. The lake in such wet weather suddenly reminds me of its Italian cousins of Como and Garda when I was a child: ducks, swans, incredibly clear water and mirror-like surface, and always grey skies, and our wet camping tents pitched and folded repeatedly on the way across the Alps, through Lilliputian Liechtenstein and towards Lucerne’s fantastic Museum of Transport, which we adored.

Hunger lurks and we decide to grab lunch by a small harbor at the smartly named Restaurant du Lac. On the menu, mostly fish and seafood, and it is delicious—though we are saddened to learn that neither my féra nor Marie’s fried Joëls are locally sourced, but rather brought in from France and Poland.

Hitting the road one last time, we cross into Switzerland as seamlessly as had been the case on our way in, drive through the small town of Anières where I get excited for a moment before noticing that one letter is missing (“J’aurais voulu avoir le 22 à Asnières”, for those of you who are francophiles and old enough to remember Fernand Raynaud), and finally, we tackle Geneva.

Coming here was not really a spur of the moment, despite the title of this post1. We figured that leaving Chamonix, driving to Switzerland and getting on a plane the same day might be too rough on our hearts if not our bodies, and had planned this last night in the city as a reverse acclimatization back into Absurdie, the boring-real-world2.

Geneva is the largest city in the French-speaking part of Switzerland, and the capital of its canton, or state. Two hundred thousand souls do not a very big dot on a map make, and Geneva, like Grand Cayman, owes its fame to the finance and diplomacy tricks of a few rather than the labor of many. Sprinkle some fine chocolate, skillfully crafted knives and insanely expensive timepieces and you have a portrait of Genève. 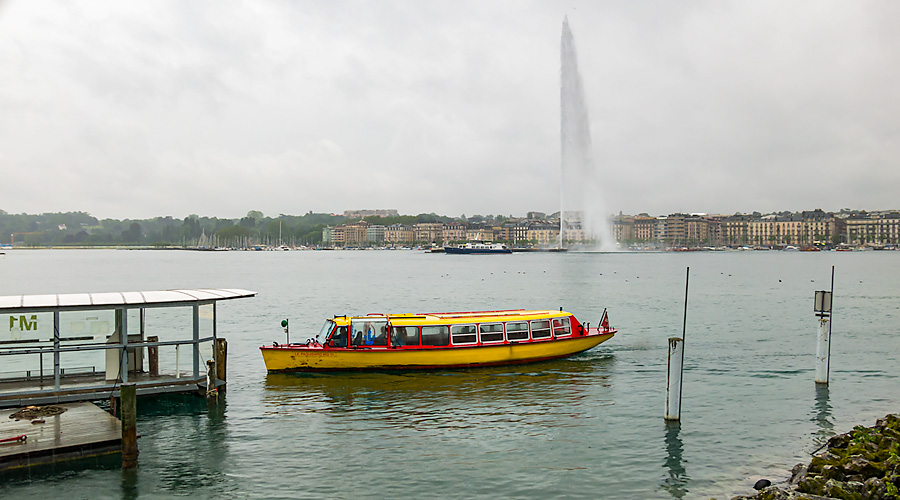 Traffic has picked up—a stark reminder that we are back in civilization—and while both of us had visited long ago, we feel like lost, goofy tourists. Heather (that is our nickname for Google Navigation’s US English voice) directs us to our Airbnb in Pâquis Centre for which the owner has sent the location of the nearest public parking as this is a very densely packed urban scene and the narrow old streets offer very little parking real estate.

Having located our address but indeed no parking, I drop Marie and the bags off and keep meandering through a maze of one-way streets, micro-construction, detours, delivery trucks and problematic directions. Having finally had success and stored the cow a couple of levels underground, I rush back a few blocks to Rue des Pâquis where our flat is on the sixth and last floor of an average residential building. An elevator the size of a minuscule closet and accessed through a normal hinged door slowly takes us up as we watch the exposed shaft walls and doors go by with a frown.

Our host never materializes and has sent instructions with a code for street level access, where to find the key, and how if asked by neighbors, we should not mention Airbnb and instead pretend that we are visiting friends. This puts us in a bad mood because as paying customers, the last thing we want to hear is that we are un-welcomed and have to lie.

The entry door, once closed back on us, reveals an enormous safety lock that bolts into metal fittings in the wall on both sides, as if we had just stepped into a gigantic bank safe. This might be Switzerland but the contraption still looks ridiculous and makes us ponder local crime levels. 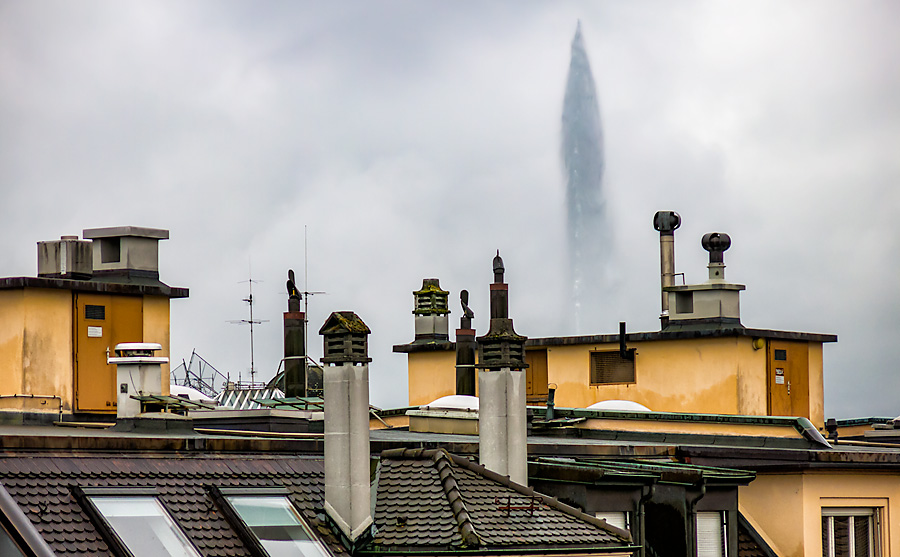 The apartment is acceptably spacious but curtains are ripped and dirty, the bed’s mattress lacks a cover and is stained, and a ridiculous washer-dryer assembly is secured by color straps in the middle of the bathroom, occupying most of the usable space. The living-room sliding door to a small balcony offers a voyeuristic view into apartments across the street and a sprawl of chimney-spiked rooftops; the curtains remain pulled.

Oh well. We unpack, settle, then venture back out for a stroll despite an intermittent drizzle, along the lake and across a bridge that links both banks. It is extraordinary to think that under our feet is the river Rhône. It has flown through the lake on its way from the Swiss Alps and will eventually escape into the Mediterranean through the beautiful estuary of Camargue, roamed by herds of wild horses and bulls, and flocks of flamingos, so far south on the French coast.

Back at the flat, we relax for a while, having set our sights on Café du Centre for dinner around seven o’clock. With a bit of time to spare, I set out on foot in search of an open pharmacy or drugstore. Just like I remember it being the case in France in the seventies, finding an open pharmacy on a Sunday evening has to do with the proverbial haystack. Only one pharmacy, called pharmacie de garde is open at a time for any given part of town, and the one covering my neighborhood is well out of reach.

After walking in circles for about forty minutes, I finally find an open Migros grocery store at the central train station and walk into complete chaos. This has got to be the only open store in a five mile radius, judging by the number of people already shopping there. It sells a bit of everything and I queue up patiently, then walk back to the flat and we head out to dinner.

The Café is a typical brasserie-style restaurant, and a mixed crowd shuffles in and out. Our chanterelles, steak tartare and fish soup meal is all right, but maybe not living up to Marie’s expectations that are probably tinted by many years of replaying memories.

In the morning we pack up slowly, having time to kill before our flight. We return the car after struggling for a while in search of a gas station, the Geneva suburbs giving way almost instantly to agricultural land, and upon checking in Marie finds out in desperation that because we are flying to France for a Paris layover, we will be herded to a small section of the terminal that is under French Customs, and will miss the main duty-free shopping area. She is devastated as she had planned to get last-minute Sprüngli chocolate presents.

North Sea and both coasts

Our flight into Charles de Gaulle yields a nice Paris fly-by, and the transfer once again unfolds without a hitch. On the second flight, our route to North America crosses the North Sea into the UK, giving me a splendid view of both coasts.

Unfortunately—this is England after all—an overcast layer soon develops and occults London, and the faraway towns. With the sun no longer zooming in and London drowned out of sight, I draw another breath and try in-flight entertainment. Ice Age is coming but phony Beatlemania has bitten the dust, along with Galileo, so I give up and pick up the Figaro, but nothing there really matters3.

My thoughts drift back. Geneva has not impressed. It was crowded, busy, not necessarily very neat and comparatively flat as a pancake. It lacked peace, balance and spirit, and the whole vertical dimension. The Airbnb was a let down and tarnished the country’s reputation for orderly cleanliness. And the weather, well, that was morose.

Chamonix, on the other hand, shone. It is a precious gem we could easily call home.

Reaching JFK at dawn, we retrieve our beloved Ntini and negotiate the morning rush hour, headed home when all others go to work.

Far in the distance, the Empire State Building looms, urban summit of its own, as much of a challenge to me as Mont Blanc could ever be, even though here rock, ice and snow have melted in favor of pipelines, funnels and targets, and ongoing forecasting deals not with weather, but dollars.

1. The pun about this famous Everest feature, however, is intended.

2. Le Vrai-monde-où-l’on-s’ennuie, also called l’Absurdie in the adventures of Olivier Rameau, a witty cartoon series by the Belgium duo Dany and Greg.

3. Yes, that paragraph was a wink to The Clash and Queen.

I have posted the best images from this series in a couple of VMP galleries, Chamonix, Annecy and The World from Above. If you pay them a visit, the shots are well worth it, and they are in the great company of around sixty other updated galleries!