In and out swiftly, grab the pork buns, take a few pictures and go
New York

So I had a craving. The goods? Pork buns. The source? Chinatown. The catch? None, other then, well, an expedition out of Harlem boundaries and into Chinalem – the smells, the sights, the sounds being crystallized, as if heightened and enhanced by an almighty cynical hand, amplified and thrown back at me with a challenging smirk.

I grabbed a camera and lenses, put a backpack together, allowing for internal food-carrying space and plotting various heat escape vectors – lenses don’t get along too well with hot-out-of-the-oven baked goodies, they tend to blur the fog up.

It was the 3 train to 42nd Street Grand Central, where I traded off, at a loss, for the R to Canal Street. I emerged in fake central, sidewalk vendors pitching their Armani, Tag and Whateverelse cheap copies to an innocent tourist crowd, thick as molasses and dripping slowly down the streets. A brisk walk east and then I remembered I never find the spot on my first pass. It’s a joint, really, a small hole on Bayard Street. But they make the best buns.

Google Maps came to the rescue. Mei Li Wah was identified, dead reckoned to and spotted. I walked in hand on wallet, worn out paper bill at the ready as they probably still don’t accept plastic. A short – I shan’t dare say stiff – smile requested my order.

“Twelve pork buns,” I explained, “and four of the coconut ones, please.” A head was nodded once, a pastry box produced, buns piled, a string wrapped. “Seexteeen umpfishingand nettynein,” I think my salesperson said, referring to a dollar amount. My twenty was spun across the counter in all its glory. Valuable change came back. Laundry was on the horizon.

Back at the door, I carefully fitted my prize into the backpack, minus one coconut bun dutifully levied as real-time fuel for the ride, and to be eagerly eaten as soon as hands outnumbered things to carry.

But then, the camera complained. “Your sweet tooth does me no good,” it buzzed, “unless you (ab)use me.” It’s not masochism, just eagerness to serve. Stuffing the coconut delight into my mouth, I reached for the friendly grip, pulled all twenty-two megapixels out of the bag, full-framed a few scenes and fired away, trigger-happy. 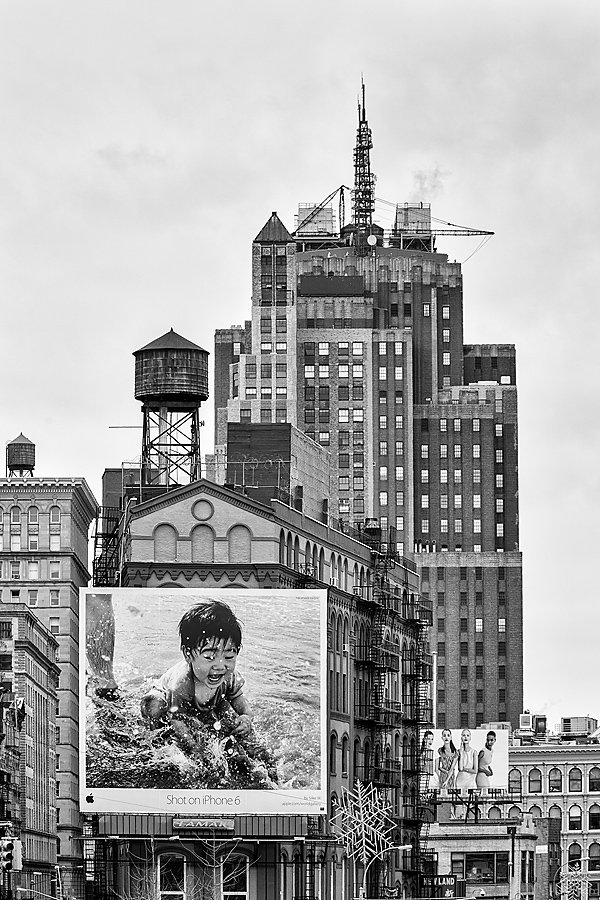 Not Shot on iPhone 6

On my way back to the subway, I paused next to a small park, looking up at skyscrapers being built faster than a fava bean grows in spring. I think.

I heard loud shouting behind me, the screeching sound of brakes and a loud thump. Spinning around, I saw a young man hitting the roof of a slowly moving car as hard as he could with one fist, then walking around and away, yelling. The driver stopped, opened his door, stood half-way out and yelled back unintelligibly.

A cop on foot was coming our way. As he walked past, he looked at me and shrugged as if to say “Don’t ask me!”, raising both eyebrows. He went over to the car and leaned to the passenger window which was down. The young man was still in view and had pulled his sweater’s hood up. He turned around and paced back and forth, hands on his head, either in great anger or stoned. Then he turned the corner and disappeared. The cop talked with the two car occupants for quite a bit, then they drove on. I went back to my building contemplation.

The uniform came my way. I figured he was going to ask if I had witnessed the scene. Instead, he stopped next to me and his gaze followed mine, away from the action. Then he furtively looked down at my lens. It was longer than his gun but he might have been hungrier for gossip than for a gunfight.

“So,” he said, “any celebrities around here?”

I laughed, still looking up at the construction. “I don’t do celebrities, too shy. I’m shooting buildings. They move slower.” He nodded, still staring upwards with me. “Besides,” I added, “the buildings won’t punch me.”

He seemed to appreciate the argument as a connoisseur.

“So what happened?” I asked pointing my nose back at the park.

“Well,” he began, obviously quite happy to report, “that was the son. Parents in the car. They were having a family dis-agree-ment.” He had punctuated the last word a bit like my cat used to.

I laughed again. “Could have been worse, I guess.” We fell silent for a moment, each probably evaluating how much worse it could really have been, based on two radically different sets of criteria.

“Well you take it easy now. Have a good one,” the cop said. He gave me a nod and headed away.

“You too,” I thanked. To validate my point, I aimed at the buildings and snapped a few shots of a triple perspective of towers, with 1 WTC in the background. Great shot. Except I had the wrong settings dialed in. So much for the big lens.

Here are the offsprings. Not very inspired, I must admit, I was trying to be journalistic.

Days later, the coconut lingers, temptation in a fridge. Pork, too, is being rationed, like sips of condensed milk on a tough mountain climb.