Discovered in June 2011 with the help of Hawaii's Panoramic Survey Telescope and Rapid Response System, after which it was named, comet Pan-STARRS [C/2011 L4 (PANSTARRS)] is a newcomer that will never be seen again, its elliptical orbit around our sun lasting 100 million years.

Last night, March 9th 2013, the weather was near-perfect and Marie and I decided to try and catch an early glimpse of the visitor. Rushing by some 100 million miles away, the comet was there, low in the western sky, an expert at camouflage, mimicking the many contrails of commercial jets at cruising altitude. But while the contrails faded away within minutes, the comet lingered longer, the angle of its tail  surprisingly changing as the minutes ticked away. Somebody please correct me if I am wrong and have shot some freak celestial body instead, as I didn’t expect that tail to swing around so fast… 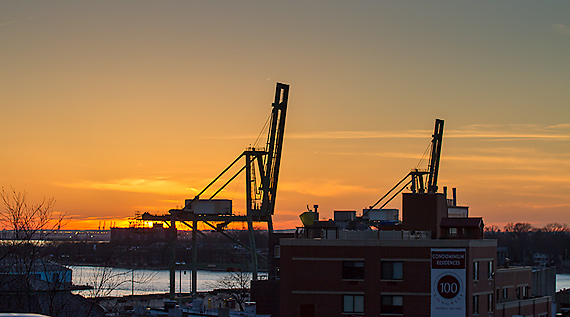 My adventures in astrophotography have been rare. The last attempt yielded strange results. So this time my pictures are bad, not astronomical-grade by any means and taken with a simple 70-300 telephoto and a 1.4 teleconverter, with mirror lock and cable release, but I am convinced that our rooftop shakes permanently from the proximity of the BQE highway, and that’s quite hard to stabilize. Still, this was literally once in a lifetime.