I recently stumbled upon a very interesting article reevaluating the importance of fat in our diet. It’s long and at times quite technical, but well worth reading. Like any other source of information, it should be cross-referenced and not necessarily taken for granted as is. But it makes a solid argument in favour – yes, you read well – in favour of cholesterol, and of eating butter.

Of course, as you might already know, I’m a little biased here. I love butter. 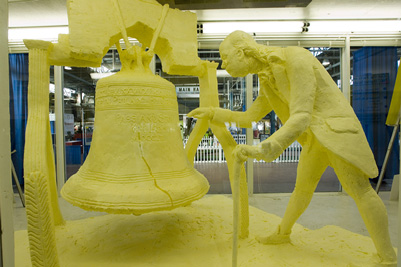 And I am thrilled to read that some actually consider it to be a healthy cornerstone (ok, I might be exaggerating a bit) of many foreign diets, in cultures that have obviously avoided for the longest time, and despite a high consumption of animal fats and butter, the pitfalls of North American diet-related issues. This article and others around it are denouncing an agriculture industry-lead campaign against fat which in the end only reflects said industry’s need to get rid of it’s by-products (for instance pushing soy products as cure-alls when in fact it just has too much left-over from the soy-oil industry), a need that is met by inducing a trend of anti-fat diets that promote as "healthy" the very foods and habits that are weakening us as a modern specie.

As a final example, let us consider the French. Anyone who has eaten his way across France has observed that the French diet is just loaded with saturated fats in the form of butter, eggs, cheese, cream, liver, meats and rich patés. Yet the French have a lower rate of coronary heart disease than many other western countries. In the United States, 315 of every 100,000 middle-aged men die of heart attacks each year; in France the rate is 145 per 100,000. In the Gascony region, where goose and duck liver form a staple of the diet, this rate is a remarkably low 80 per 100,000.25 This phenomenon has recently gained international attention as the French Paradox. (The French do suffer from many degenerative diseases, however. They eat large amounts of sugar and white flour and in recent years have succumbed to the timesaving temptations of processed foods.)

The French Paradox. I like that. I’ll reuse it. After all, this very blog received its name as a tribute to the apparent paradox of seeming out of place and time while in fact, both are just right. Wandering invariably yields wondering. But I digress. I find the comparison between North American and other regional dietary habits fascinating because it revolves about culture and ancestral practices opposed to media trends.

Margarine is such a North American media and cultural trend. It has banned butter off our tables and pretends to be a blessing if bought in low’s (low-fat, low-cholesterol, low-sodium, low-taste, low-price.) Here’s the article’s description of the hydrogenation process – and my Advisor should beam with satisfaction:

Hydrogenation: This is the process that turns polyunsaturates, normally liquid at room temperature, into fats that are solid at room temperature—margarine and shortening. To produce them, manufacturers begin with the cheapest oils—soy, corn, cottonseed or canola, already rancid from the extraction process—and mix them with tiny metal particles—usually nickel oxide. The oil with its nickel catalyst is then subjected to hydrogen gas in a high-pressure, high-temperature reactor. Next, soap-like emulsifiers and starch are squeezed into the mixture to give it a better consistency; the oil is yet again subjected to high temperatures when it is steam-cleaned. This removes its unpleasant odor. Margarine’s natural color, an unappetizing grey, is removed by bleach. Dyes and strong flavors must then be added to make it resemble butter. Finally, the mixture is compressed and packaged in blocks or tubs and sold as a health food.

The bottom line, sadly, as I have assumed for a long time and been explained more precisely recently by my Advisor, is that 90% of modern food is plain and simply… bad. We process everything and kill the good part of what we eat. That’s an unavoidable consequence of mass-production. So where do we stand? I don’t think that organic farming is productive and sustainable if a majority of the population was to wake up and smell the roses, so to speak, and decide to change their eating habits and go back to more natural whole foods. Maybe this is part of nature’s selection, survival of the fittest. Maybe with so many of us sharing such a small planet, only the ones who understand what they must eat can survive.

Maybe next time I’m out shopping at Wholefoods, Capers or some other expensive local healthy store, I should look around and think, not "Hello, all of you snobbish rich pricks who make me feel like I am wrong to buy my organics eggs for 10 times the price of regular ones" but rather "Hi, so, you too intend to survive past mankind’s present dietary madness and live old and happy?"

If we need to re-learn how to feed ourselves from scratch, how on Earth will we do it from the heart of our mega-cities? How on Earth will we be able to sustain a healthier diet of the mind and body and avoid society-induced cultural, political, physiological and ideological wide-spread cancer? And how on Earth do we get it to play along? The Earth.

Perhaps what we need is a butter-fly effect. So tomorrow morning, when shamelessly spreading bread on my butter, I will hope to be indirectly responsible for a shift in our worldwide dietary awareness, ten or twenty years from now. If nothing else, it will boost my ego. Then I’ll go run a trail behind Grouse Mountain. But that’s another story.

[PS Yes, that was the Liberty Bell. I’m not very good in US history. I heard about it for the first time in National Treasure. Duh.]