Crossing the Strait of Georgia with Prince of Whales

On the road, Photoblogs, Vancouver

Strangely, the idea waited to cross my overexcited mind until Marie and I were happily browsing through the colorful aisles of Granville Island Public Market on a late 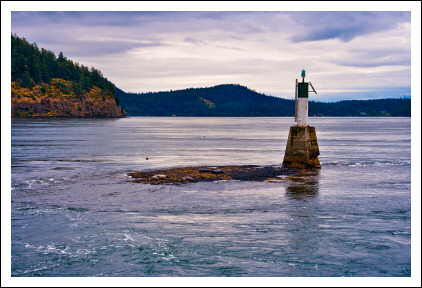 Friday afternoon. So while she was busily acquiring amazing organic strawberries, our ritualistic duck prosciutto and other wonderful goodies, I whipped out my Blackberry, browsed my way to a web page and found a lost phone number. It was 4:30 pm. Around 5:00 pm, the phone buzzed back. That was it. At 7:30 the next morning, we were arriving at Waterfront Station with our backpacks, heavy clothing, our dear cameras and a hearty picnic. You gotta love improvisation. And friends.

The weather was moodily chilly, offering Vancouver a brilliant demonstration of my newly written local adage: "In June, your clothes don’t shed too soon. In July, the sun might still be shy. In August, watch out for the tempest. And in September, it’s again time to shiver." Yeah.

There must have been a few no-shows because less than 10 people joined us aboard Prince of Whales‘ Ocean Magic docked outside the Seabus terminal. (See previous posts [[A killer time with killer whales]], [[A killer Time – Part 2]] and [[Fall is upon Vancouver]].) We headed straight up to the flying bridge and I began unpacking many layers of ex

tra clothes before an incredulous Marie who thought I was joking. I wasn’t. The air temperature downtown might have been in the low or mid-teens, I knew that once the boat got on plane and rounded Stanley Park’s Prospect Point, 30 knots of relative wind were going to chill us to the bones. Been there, done that. If fifteen years aboard dive boats have taught me one thing, it’s that wind bites and fleece rocks.

So while a c 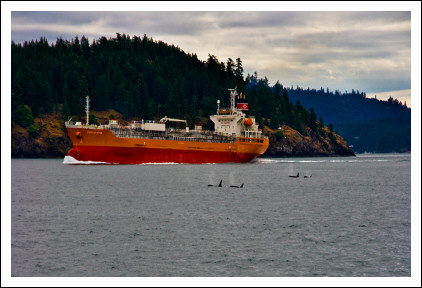 rew member was conducting a witty safety briefing, we zipped and buttoned up and tucked here and wrapped there, until we felt like winter had reappeared. The whale-looking Diamond Princess was docked alongside Canada Place and towered above us from all its 13 decks. I took this as a good sign. We were going to find some whales.

The crossing was a bit rough, the Strait behind ventilated by a nasty northeaster that forced our Captain to play with his throttles and the wheel like a virtuoso on a piano, both hands, all fingers, fast, crossing, feet agile, never a break. We headed towards Active Pass in the Gulf Islands to get to their relative protection as soon as possible. The radio was on and the network active. Soon, reports of sightings came in on the airwaves: a pod had been spotted on the west side of San Juan Island, slightly south of the imaginary border line between the US and 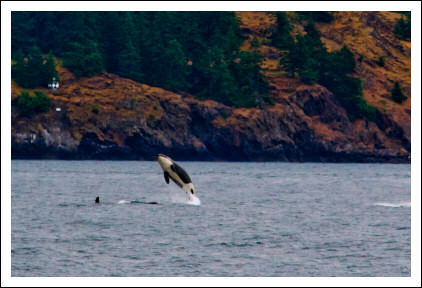 Canada. Ocean Magic turned her bow to the south. On the way, we watched a couple of bald eagles and a small colony of harbour seals by a cute lighthouse. It was all falling into place.

The whales we eventually found were part of the J pod, one of 3 families of resident killer whales. They were rather spread out, swimming in small groups, some of which appeared to be on autopilot; half of their brain asleep, they would stay really close to each other and come up to breathe, like me getting up in the middle of the night and going to the fridge – never too sure of where and when I am. We spotted Ruffles, the larger male, with his signature undulating dorsal fin. The crew explained that he is the luckiest killer whale alive, having been captured six times by aquarium teams and released as many, because it was believed his irregular fin would displease audiences!

In the wake of recent regulations aiming at protecting the whales, boats are no longer allowed to approach the pods as close as it use to be the case, not even

passively (by shutting engines down and letting the animals swim towards the boat). Since we were in US waters, a US patrol boat was present, taking laser measurements of the distance between the few boats on the scene and the mammals. The ones who cheated would be fined. Humans, that is. Marine mammals can cheat. It seems the patrol boat had exonerated itself from the rule, though, and stood smack on the path of the killer whales that swam right next to it. We were granted a couple of spectacular breaches, very hard to photograph without a powerful zoom lens,

but I’ve cropped them a bit for fun. Then we headed for Victoria. I can attest that someone’s fingers were at that point much colder than my guts, having allowed them temporary contact for warming purposes.

Sailing into the Victoria harbour is always an interesting experience. So much activity is packed into so little space that it always seems like something is going to jump out of the scenery as if ejected by the general momentum, like a full stomach popping out a shirt button after too large a meal. At least that’s what they do in cartoons… The seaplanes were buzzing around, vessels of all sizes cruising past, music was playing on the banks, buses circulating in and out. If the air had 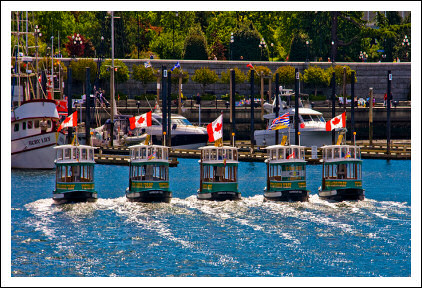 been warmer, this could have been the Caribbean. No Jamaican patties to be found here, though, but I had a date with the world’s best coconut buns.

Our first stop on firm ground, firmly navigated to and all other distractions set aside, was a pub. Sailors will be sailors. Liquid was needed, and would be had. A hot soup to warm up frozen extremities and a tall wheat beer to hydrate the soul. Funky combination maybe, but it recharged our batteries and allowed us to walk a few more blocks west to Frank’s Honeybun Cafe and stock up on their divine coconut buns (I bought 5, they are over 20 cm long each), and then on to Market Square to escape the wind and eat our duck prosciutto sandwiches in the calm sunny protection of the inner courtyard. 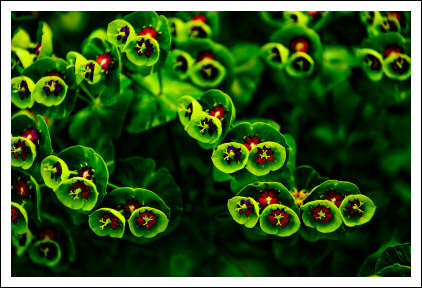 Time was flying by and we ran back to the Empress Hotel to catch a Grayline bus to Butchart Gardens. Isolated at the bottom of the Saanich Inlet, a ocean arm digging deep into the Vancouver Island from north to south, the gardens are strategically positioned half-way between Victoria and Swartz Bay, the BC Ferries terminal connecting to Tsawwassen on the mainland. Once there, we did the tourist thing, among many of that kind. 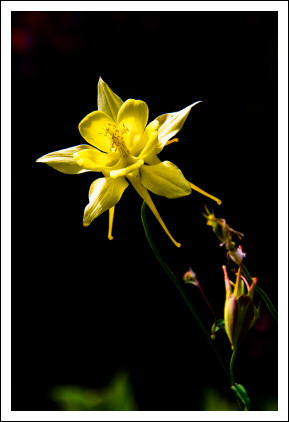 These are very nice gardens, but, personally, I think there are waaaay too many annuals………. I mean think about it: you only visit the place once, maybe twice in the year, so why should there be so many annual plants? It’s a waste of labour and resources. Even if you go back the following year and the same flowers are there, you’re not going to recognize every single plant as a déjà vu, right? (Well, I know someone who might, actually.) So why replant so often? Why not weeklies, while we’re at it? No, the best flowers in my expert opinion, would be oxo-biodegradable plastic flowers. Plant them every 5 or 6 years, then they decompose into nice compost. The gardeners can play tennis more often and all that water can be sold for profit. ;-)

Then it was late and we had to rush through the beautiful Japanese Garden and exit via a small, remote gate that leads into this charming little cove on the inlet. Ocean magic was already docked there and two cute harbour seals played around in shallow water. The cruise back to Vancouver followed a completely 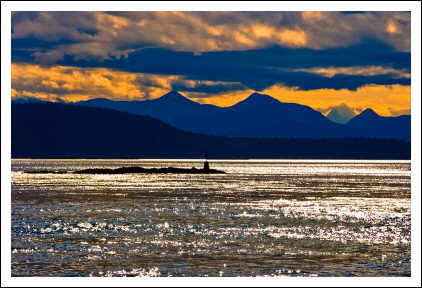 different route, a little too far north for whale watching but rewarding us with magnificent scenery, calmer waters, a smooth ride, isolated pretty little islands, funky currents and the upper deck pretty much to ourselves, as the sun was slowly going down behind our backs.

As we were approaching the city, the sun managed 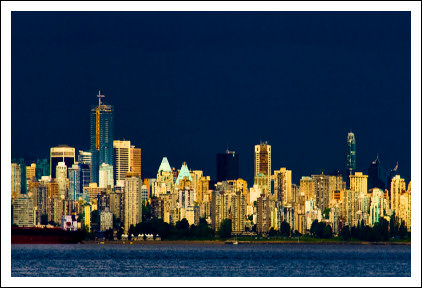 to hit the urban core on a background of very dark clouds, seemingly setting the buildings on fire. Abe was relentless. We zoomed past a few freighters guarding English Bay and slid underneath Lions’ Gate Bridge as runners scaled the Seawall at what seemed a turtle pace. Then we were back home. Hot shower, some cooking, shinny eyes, tired, happy sailors. Prince of Whales had done it once more. What a wonderful day. But then again, I was in the best company.